A view of Applebrook’s colonial farmhouse style clubhouse as viewed from the par-three 9th green.

In case you didn’t know it, the greater Philadelphia region is home to some of the best golf courses on the planet – and that applies to more than Pine Valley and Merion – East. It is no wonder that the renowned  so-called “Philadelphia School of Architecture” includes George Thomas, A.W. Tillinghast, Hugh Wilson, and George Flynn with Donald Ross having notable work there. Philadelphia also gave us George and Tom Fazio and many others. So to pierce the “classic curtain,” it takes the likes of Tom Doak, Bobby Weed, and now Gil Hanse to impress, and Hanse’s work at Applebrook is sure to do just that.

Situated in the magnificent rolling hills of the Chester County horse country west of Philadelphia in the Malvern area is the Applebrook Golf Club. Essentially a “second course” to most of its membership, this golf-only establishment appears as if it has always been there, but actually it’s of recent vintage. Developer Hank Belber II, who I knew and worked for long ago when he was a member of Whitford Country Club, was and continues to be the driving force behind the project that only opened after the turn of the century. In order to attract the area’s discriminating golfers to join another club, Belber needed to get it right. He did. Applebrook’s patio rates with the best places to enjoy food and drink of any I’ve experienced. You gaze out over the golf course with the 9 and 18 greens and 10th tee immediately in front of you – and the sunsets there are spectacular.

As you enter the stately grounds and climb the driveway toward the stone farmhouse style clubhouse, you sense you’re in for a golfing treat. If you said, “Wow, another one of those wonderful old historic Pennsylvania stone structures,” you be wrong. While the fertile farmland upon which the Club sits can be traced back to Robert Williams here near old Goshenville on the basis of a Land Grant from William Penn in 1680, the clubhouse and all around it has been loving manifested since 1999 when Belber and friends chose to construct a special golf course on the property. Enter the clubhouse and you still feel as if you are going into a vintage farmhouse rather than a clubhouse as it has smallish rooms, subdued lighting, Lancaster County beams, and rough hewn wood flooring. In the entryway, you can’t miss the fox that occupies the center, emblematic of other area horse activities. Everybody is quietly attentive and the understated classiness of the entire place stands in stark contrast to the “look-at-me” nouveau riche golf monstrosities that have been built in America the past twenty-five years. Yes, if nothing else, Applebrook spells “class” and this is a place for discriminating golfer who are serious about their game. But Applebrook’s golf course is much more than classy. It is delightfully challenging, exquisitely conditioned, and one of those layouts that can really play differently from day-to-day. Built upon rich open rolling farmland, the layout spills forth down from the clubhouse into the surrounding open meadows with ribbons of broad, wide fairways framed by long fescue. Classic rectangular tees begin the adventure on every hole where you will encounter generously wide, but immaculately tight fairways. Architect Gil Hanse who learned much of his craft from Tom Doak shows his attention to detail with the green surrounds. Like Doak or Coore/Crenshaw, here is a master at work producing an easy walking golf course with short distances between greens and tees. Looking back at the par-four 4th hole reveals many subtle aspects of the green complexes at Applebrook.

Yes, it was the greens that most impressed me about Applebrook. They are tough! They are quick and smooth with lots of movement and various sections that all of a sudden require you to position your ball in different segments of the fairways to access them. So, in reality, the fairways play more narrowly if you hope your approach will result in a short putt. Like Doak and a few others, the shaping around the greens involved a lot of handwork – no sweeping bulldozer grades here. As a result, getting up and down is a considerable challenge and that includes the bunkers and rough as well. While some approaches are mowed into penal false fronts that can trundle back toward the golfer, they can be approached with a putter, hybrid or most any shot for that matter. The bunkering is penal and on the 9th and 18th holes downright deep and nasty. And miss the bunkering and you might be searching for your ball in the “championship style” native grass rough. While the wide fairways encourage you to swing away with all you’ve got and that might suggest a benign test, Applebrook is anything but docile. The picturesque par-five 8th seems to have the most trees adjoining it. Several are magnificent!  Below is looking back on the 8th from behind the putting surface. The par-threes impressed me as the toughest portion of the Applebrook challenge. They range from the tiny “postage-stamp” 11th at only 121 yards to the 224-yard 15th. Though none of the holes are extraordinarily long, they either have challenging targets to hit, undulations to putt, or dastardly hazards waiting – and clubbing the distance is of paramount importance. In the space of three holes, you encounter the two shortest, but perhaps the most engaging one-shotters at Applebrook. The 149-yard 9th has the picturesque old-style clubhouse as a backdrop and a cavernous bunker to catch anything short and left while the aforementioned 11th at only 121 yards is an all-or-nothing tee shot. Totally exposed to any wind, there is nothing routine about it, or any hole at Applebrook for that matter. The par-three 11th green is tiny and fully exposed to the elements, but hit it and you will have a relatively short putt!

The toughest par-four may be the 454-yard finisher that climbs up to its elevated putting surface. The terrain plays much longer than its distance and should the breeze be behind you, it’s not easy either for just as at the adjoining 9th hole, another cavernous bunker protects the right side of the putting surface that is pitched sharply toward the front. The huge deep bunker to the right guards the front of the green on the mighty uphill finishing hole at Applebrook. Below is a better look at that greenside bunker. Another short hole also grabbed my attention – the 310-yard third. Playing downhill, it is easily within reach for today’s stronger players, but beware. The green is partially hidden by some bunkers and fescue-covered mounding. A ball carrying those obstacles may easily run through the putting surface into a nasty situation beyond. The sage play is down the middle or left side of the fairway opening up a nice avenue for a little wedge. In some respects, Hanse has teased the golfer with interesting angles much as Philadelphian George Thomas did at the 10th at Los Angeles’ Riviera Country Club decades earlier – great stuff! 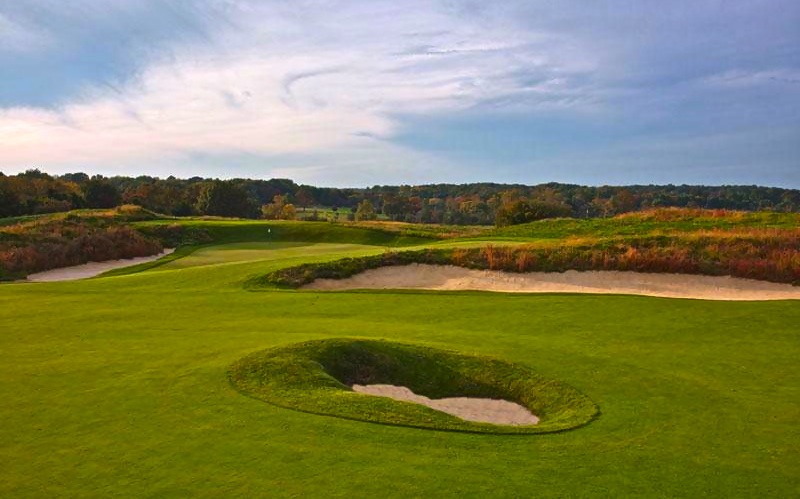 Play safely to the left side of the fairway avoiding this little pot bunker and the third hole is a good birdie opportunity.

I found the par-fives to be both engaging and attractive as well, which is not to say the par-fours are weak, far from it! There is nothing extreme distance-wise about the 6,815-yard layout on its par-71 frame; it’s eminently playable yet challenging (slope 137, rating 73.9 from the tips). A view of the attractive par-five 10th hole.

Applebrook is an open course where you can enjoy expansive views across much of the property from most any location, and with its classic lines and rugged bunkering is a throwback to its neighboring Philadelphia classic layouts. Not only does the clubhouse look like it’s been around for a while, but the golf course does as well. Gil Hanse was able to bring it all together and with the Belber touch, it all works. Yes, the rich menu of Philadelphia golf course classics has yet another addition with an “instant classic” called Applebrook.

Below is the par-three 9th hole. Don’t be short!