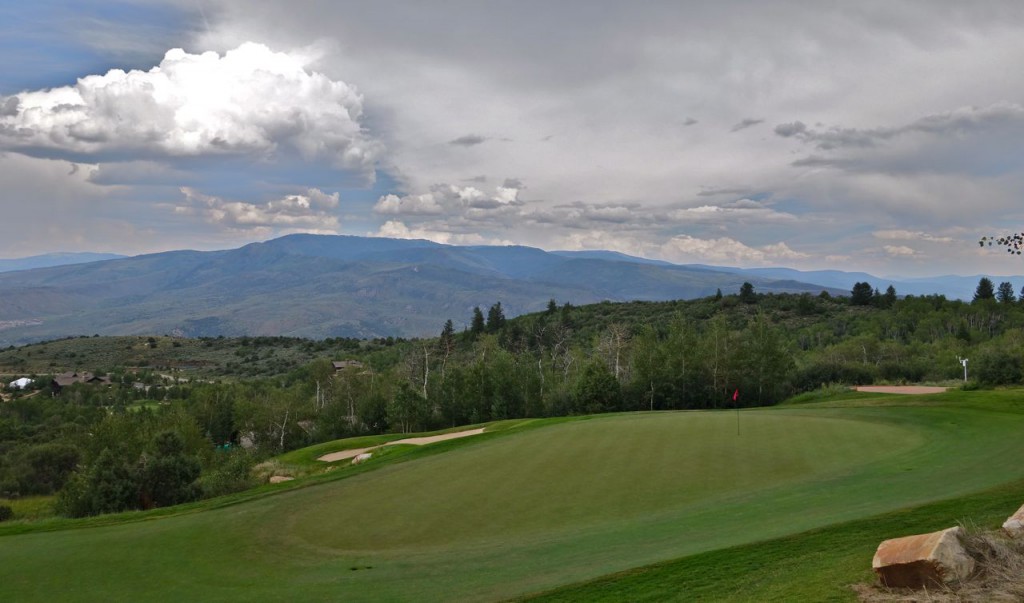 Get ready for some gorgeous views and some stellar golf when you tee it up on The Norman Course at the Red Sky Ranch Golf Club! Shown above is the green to the par-five 12th hole. (Photo by Robert S. Fagan)

Red Sky Ranch in Wolcott, Colorado just west of Vail is a wonderful upscale semi-private club that offers two extremely scenic golf courses, the Fazio (Tom) Course and the Norman (Greg) Course. The Club alternates courses for daily public play always keeping one private for its membership – a very sage strategy. Established in a rustic ranch motif, the Red Sky Ranch Golf Club also has a very comfortable “Guest Clubhouse” allowing for the other to also remain the private domain of the members in addition to separate public and member practice facilities. 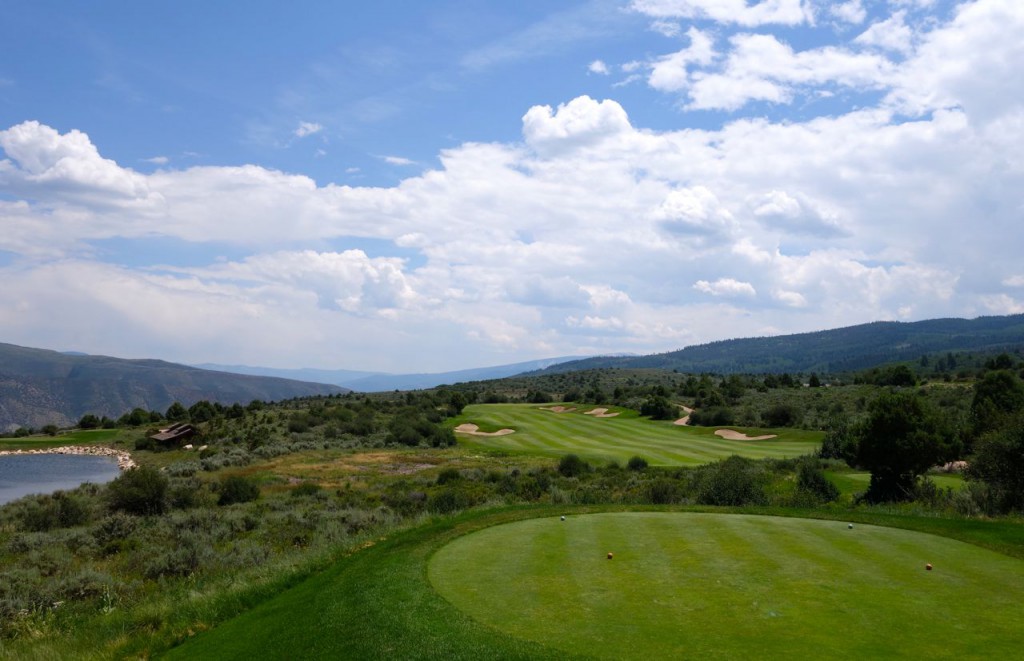 At 351 yards, the par-four 6th is the second shortest of the two-shotters and like the 15th may be drivable by long hitters. (Photo by Robert S. Fagan)

I had played the Fazio Course several years ago and found it a very pleasant layout. With many of the golf course looks and patterns that you find repeated in Fazio’s other designs, however, for me it was solid, but not uniquely special. Located on less elevated terrain, it nonetheless has many wonderful views and perhaps the majority of my friends favor it over The Norman Course. The Norman Course still gets some pretty heady golf course ratings and so I was anxious to play it as well. Even in the weeks just before playing it, I received some mixed reviews about it. What would I find? 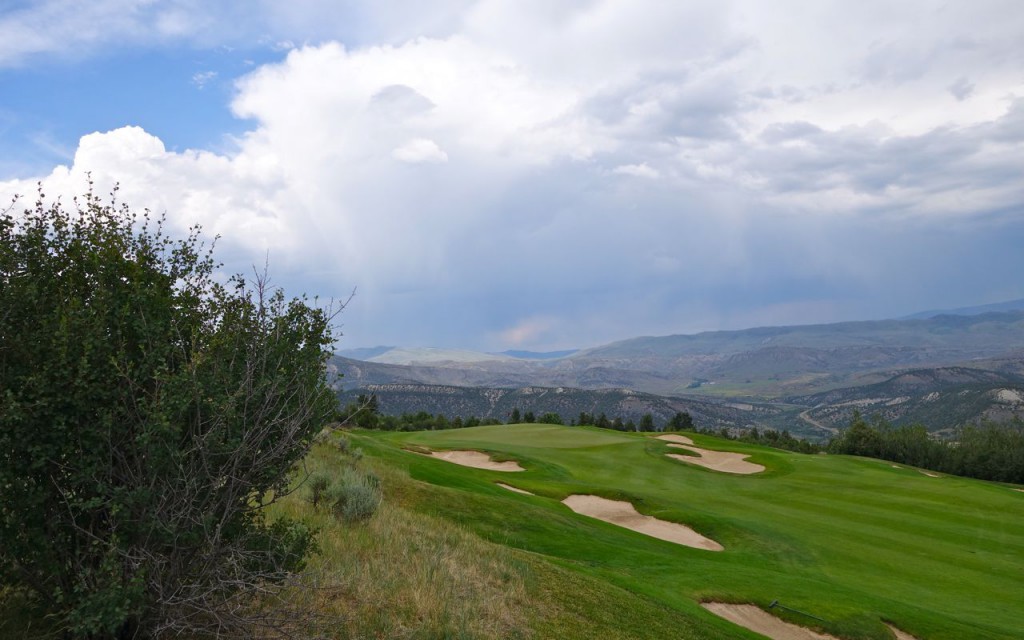 Rolling, rugged high desert terrain and foliage are just part of the challenge and scenery that at the par-four 14th on The Norman Course at Red Sky Ranch. (Photo by Robert S. Fagan)

The long and the short of it is that I really liked the Norman Course at Red Sky Ranch. And I even preferred it to the its sister Fazio layout. Criticism number one was that many holes paralleled one another back and forth so as to be quite tedious. Well, the first, third, ninth, and eighteen do  just that, but their order doesn’t follow one another and there is enough other change in direction and elevation in the routing so that it didn’t bother me in the least. The other holes either play alongside the mountain slope or for the most part, down it. What’s more, with the exception of the fun par-four second hole, I found the greens receptively positions and generous in size and don’t recall any unreasonable forced carries. As usual, it pays to play tees suited to your carry distance and skill level.

Several of the more noted elite area golf courses occupy flat or nearly flat sites in the base of the Vail Valley whereas the Norman Course artfully weaves its way through the higher even more scenic alpine hillsides of sage and aspen groves affording not only some splendid golf, but some truly panoramic views as well. It is not the only situated area course, but upon reflection of the half-dozen other similar area ones I have played, the Red Sky Norman Course may be the best – or at least my favorite.

The Norman Course at Red Sky Ranch features rugged high desert foliage, rock outcroppings, and steeper elevation changes – and the views are even more spectacular than the Fazio Course. It is also a longer golf course, an altitude-assisted 7,580 yards from the tips (versus 7,113 for Fazio). As did Fazio, Norman employs some big, bold, impressive bunkering to establish the look and challenge. The putting surfaces are good-sized with lots of movement and run true. 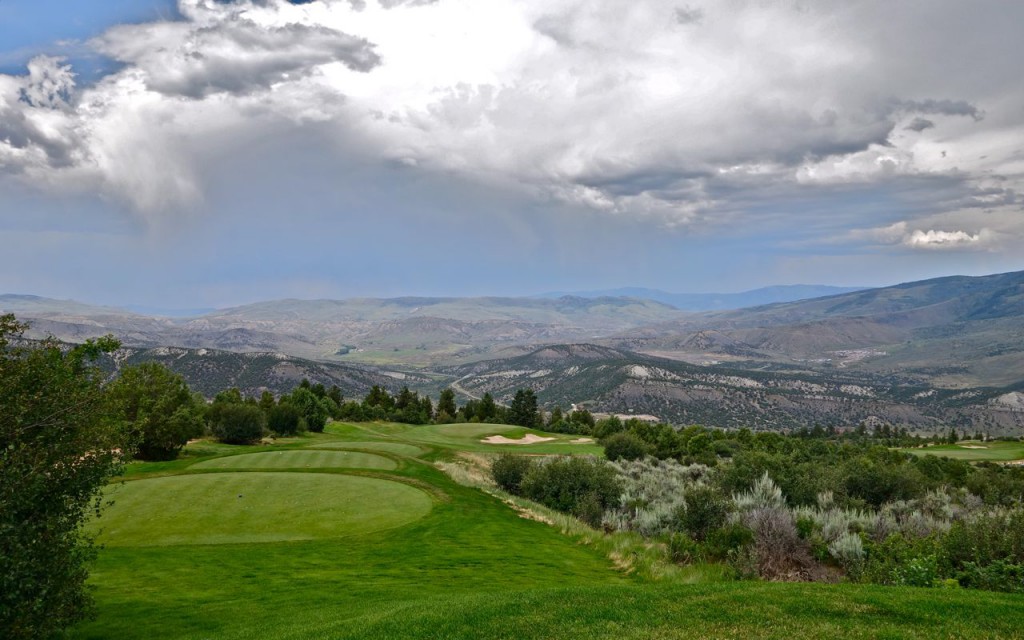 This is what a 283-yard par-three looks like from the tips. Actually, I figure that between the drop and the altitude, it plays about 240 yards. As the picture below reveals, the green is much larger than it appears from the tee. (Pictures by Robert S. Fagan) 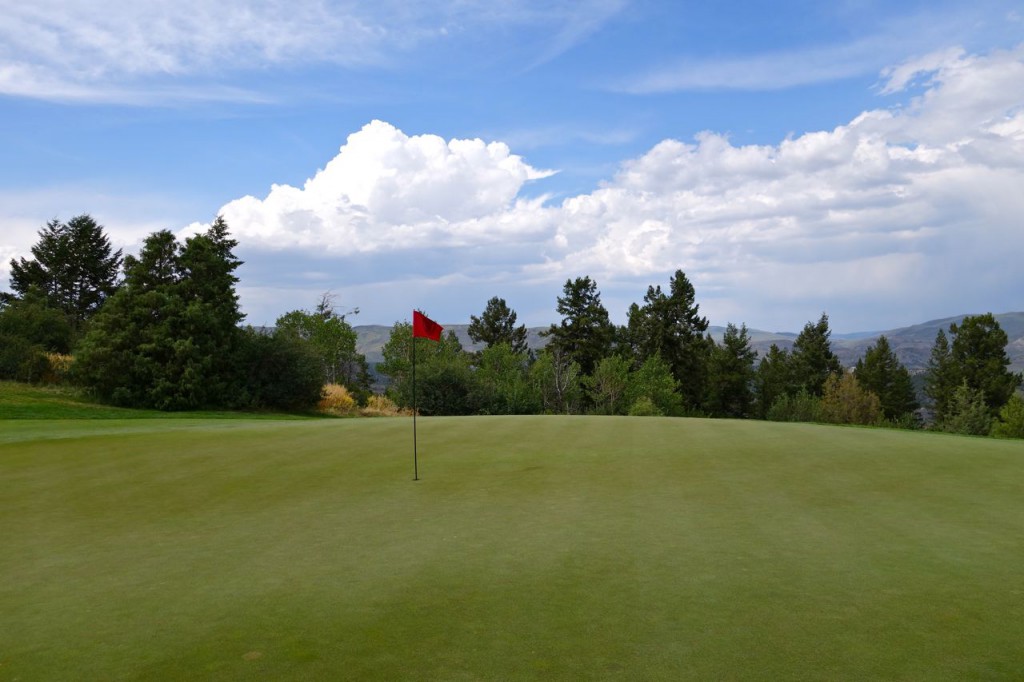 There are many “Wow!” tee boxes where you just want to reach for your camera, and the longer holes have ample driving areas. I particularly enjoyed the variety of two-shotters including the ones that played shorter such as the 3rd, 6th, 7th, 11th, 14th, or 15th. Whether for abundant bunker, the high desert foliage pinching and highlighting the challenges, or the views and elevation changes, I really liked these holes. 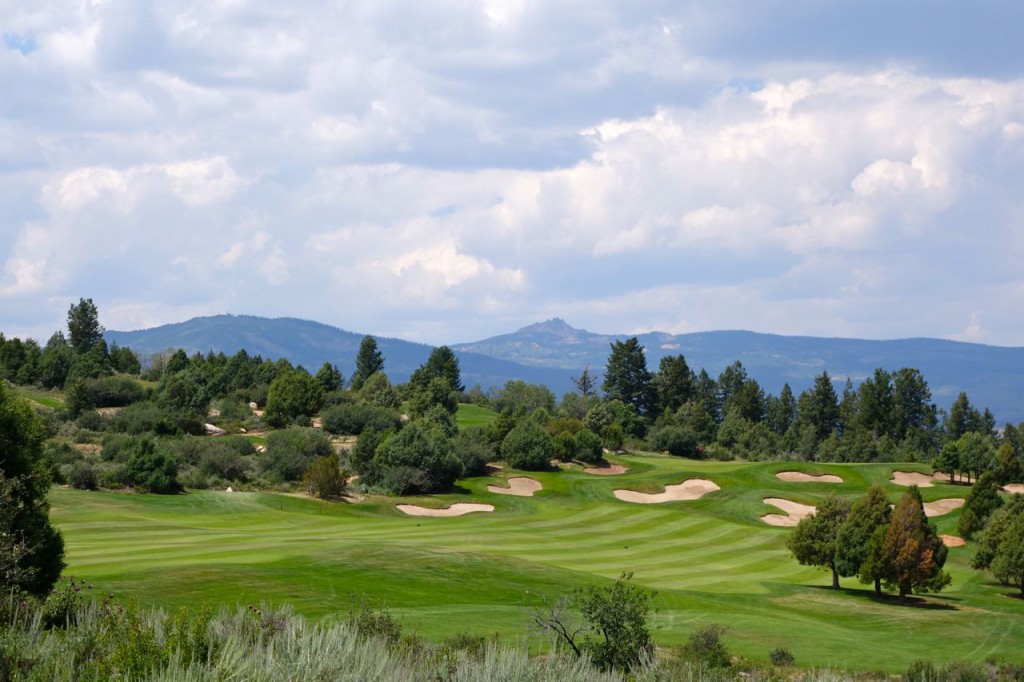 Designer Greg Norman throws a tumbling fairway, lots of bunkering and an elevated treacherous green at you on the gorgeous par-four 7th, but it is his angling of the fairway that really intrigued me. Cut off as much as you dare. Below is the view back toward the tee from the green. (Both Photos by Robert S. Fagan) 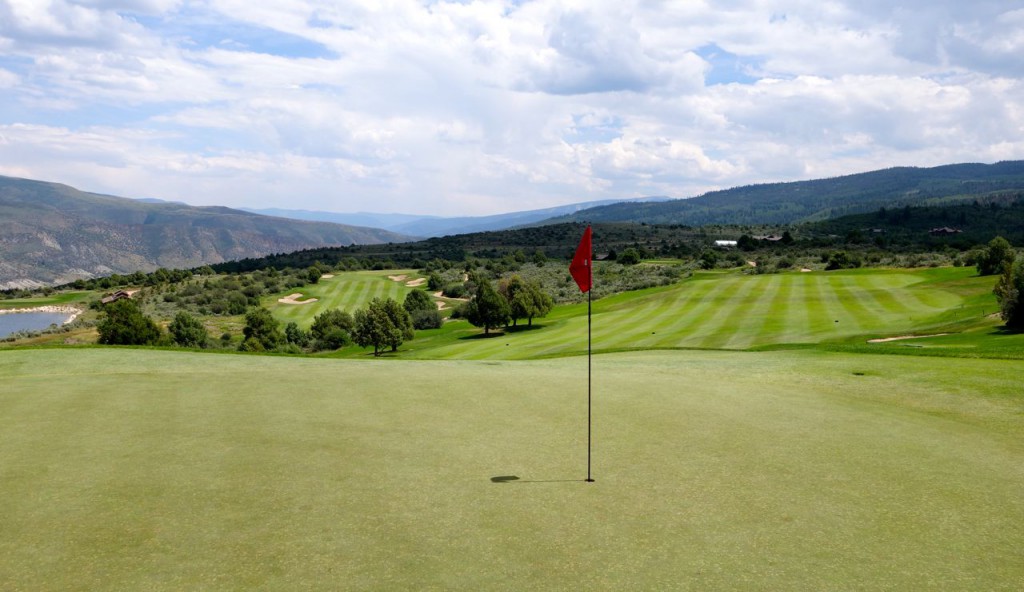 In reflection, I count the quartet of par-threes on the Norman Course as among the best anywhere with four very different looks and plays. I had to venture to the tip to try out the 283-yard downhill 16th that I figures plays about 45 yards shorter than its distance and is spectacular. The fun begins at the 200-yard 2nd over a canyon to a well-bunkered large green while the 231-yard 5th over a small lake with the Valley to the right is perhaps even panoramic. In contrast, the short little 165-yard 10th plays uphill into a forest surround and spell trouble for anyone missing the green – wonderful stuff!

Below:  I couldn’t resist showing all the other par-threes as well because they are so different and beautiful! 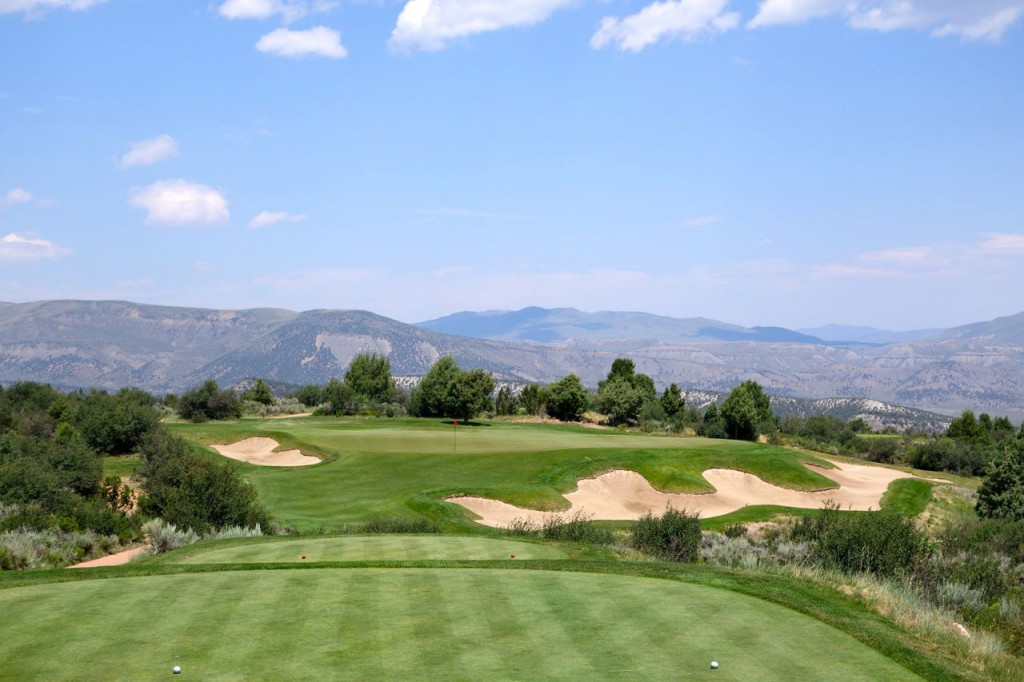 The 2nd hole features a large, undulating “all-or-nothing” green, and getting up-and-down from that gargantuan front bunker is no easy task. (Photo by Robert S. Fagan) 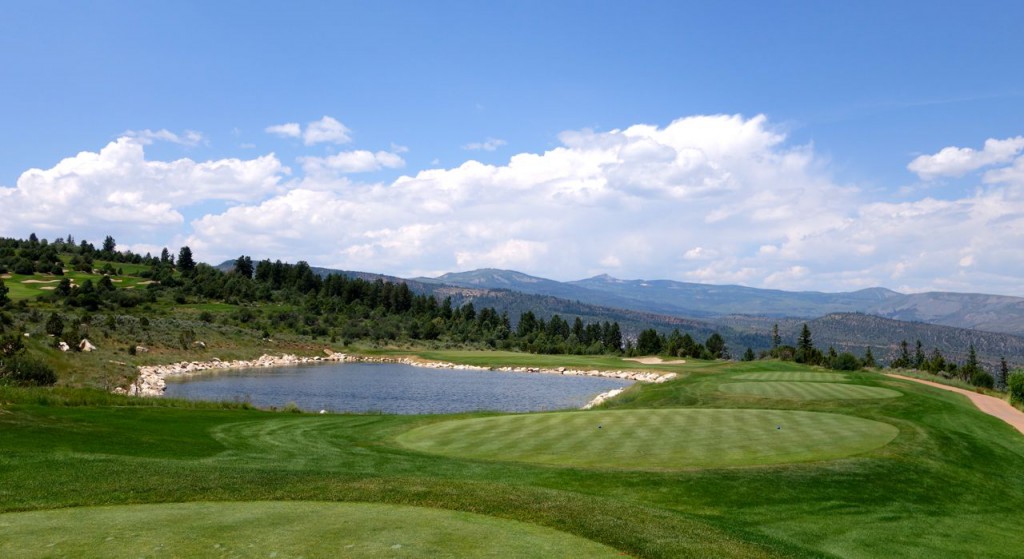 The 231-yard 5th hole features the course’s only lake, but not its only expansive vista! (Photo by Robert S. Fagan) 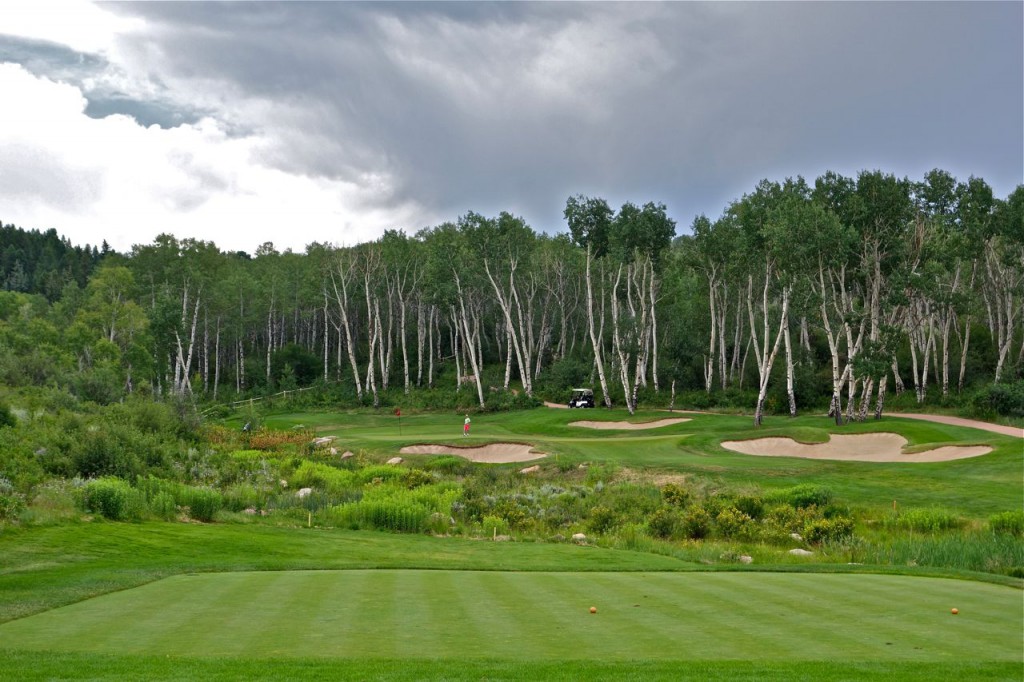 The 10th hole stretches to 165 yards from the back tees, again featuring a very different look and a large putting surface that plays much smaller due to its undulations. (Photo by Robert S. Fagan)

The par-four 9th and par-five 18th do play along parallel lines and share the same basic flow back to the Member’s Clubhouse so there might be some criticism there, but both are solid holes The 18th is a decent if slightly anti-climatic finish. The par-five 8th is a decent straightforward affair with its greensite perch spelling trouble for any misguided approach, while the elevated tee shot and long narrow putting surface at the 4th had me gambling for a go at the green in two shots with the out-of-bound hugging the right side. Finally the 12th just beautifully sets out in front of you beckoning your best shots in hope of par or better and the views from the hole’s finish are sublime.

The view from the 565-yard 4th illustrates the expansive beauty of Red Sky Ranch and bold bunkering employed by Greg Norman. Below are three very different views of the same engaging putting surface that completes the hole. Notice the long, narrow dimensions and how closely the out-of-bounds ventures alongside. (All Photos by Robert S. Fagan) 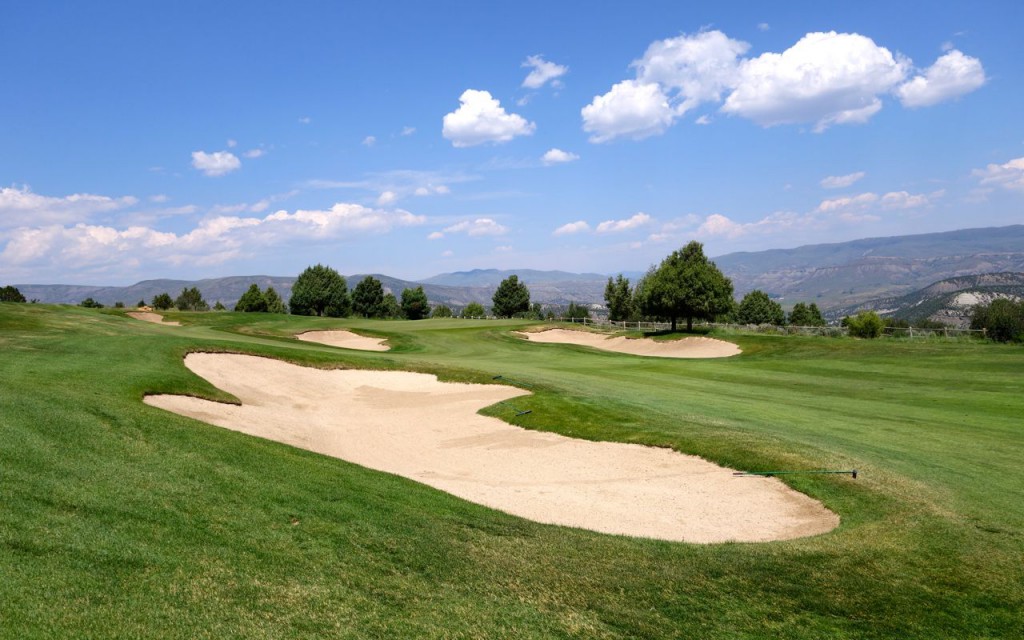 As you get closer to the putting surface, you begin to realize the depth of it. (Below) This picture was taken alongside the green. 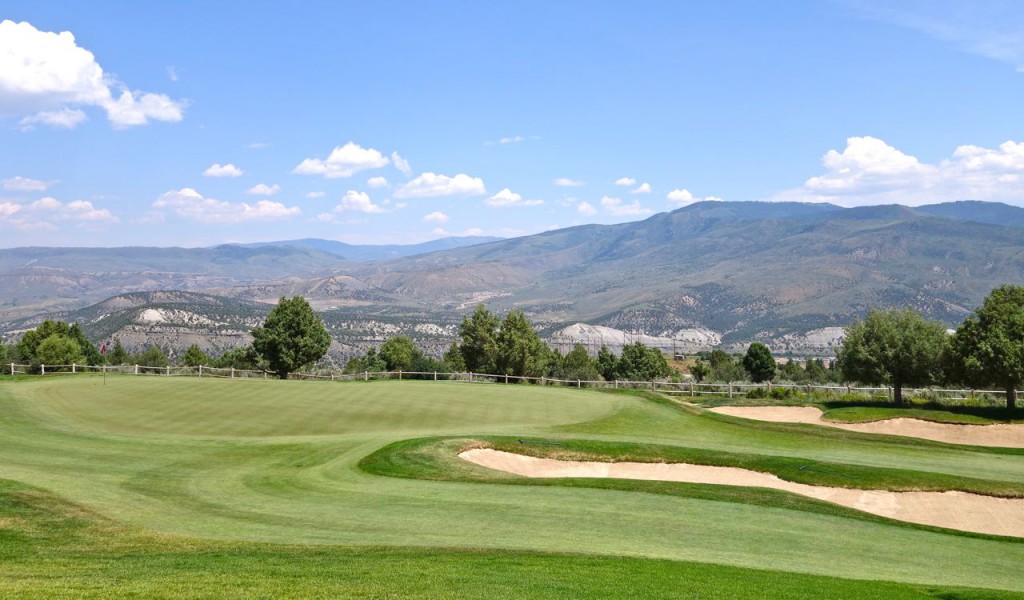 Looking back from behind the 4th green provides yet another perspective – how narrow the target truly is. (Below) 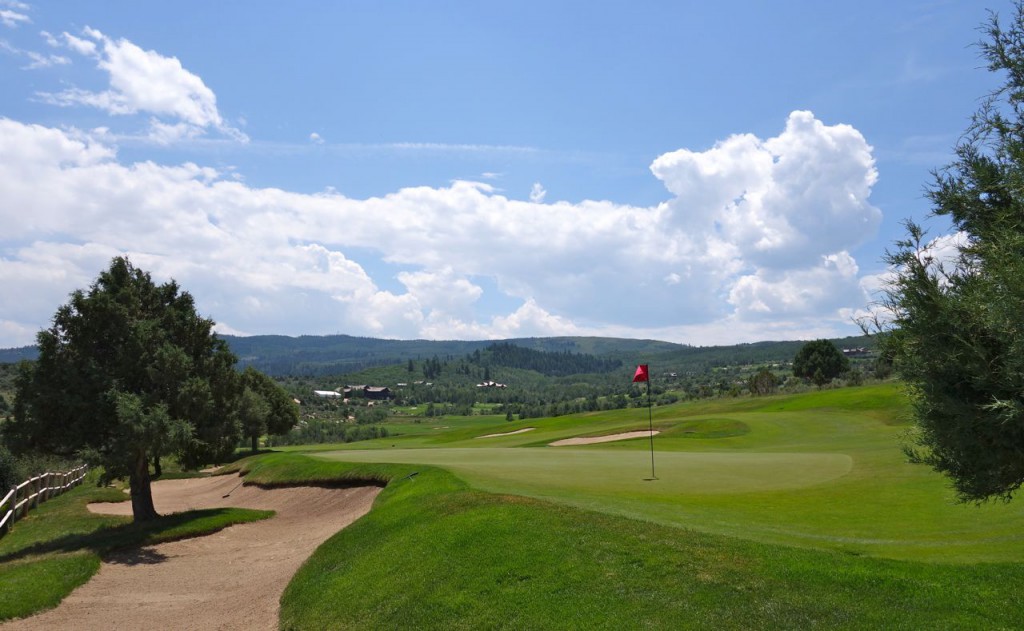 The Norman Course at Red Sky Ranch had me reaching for my camera far more often than my clubs, and the challenge was bold and varied, the conditioning excellent. I loved the golf course!