From left to right, the 2nd tee, 1st hole, 18th, and 17th hole only begin to showcase the panoramic views of Highland Pacific Golf Club.  (Photo by Robert S. Fagan)

Driving up to the Highland Pacific Golf Club early before dawn, you don’t see much of the golf course. Situated just a tad closer to downtown Victoria than its nearby neighbors, Olympic View and Bear Mountain – and Victoria’s newest 18-hole golf course.

Checking in in the golf shop, I asked about the background of the golf course. The nice gentleman behind the counter indicated that it had been a “work-in-process, was family-owned, and built a few holes at a time.” In my little, but experienced world of “golf-speak,” those statements are code for “cut-rate, unimaginative, boring, and skimpy.” After playing three pretty exceptional golf courses the previous 36 hours, I concluded that this would probably be the “disappointment” in the group, the “throw-a-way”course if you will as I had not heard anyone previously volunteer anything about the layout. Wow, was I surprised – Highland Pacific could arguably be the best of the lot in many eyes – a complete and utter surprise! 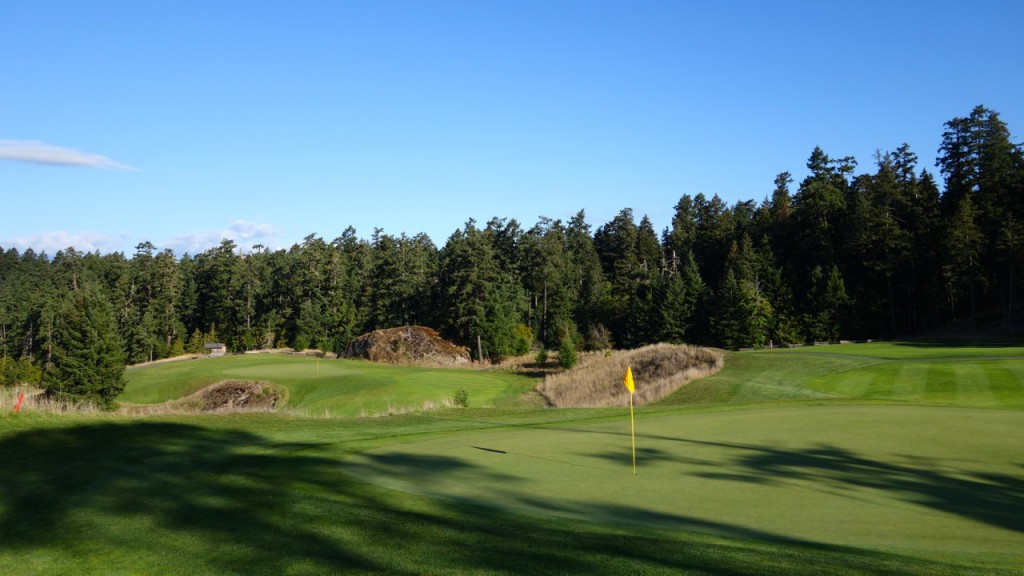 The property was acquired nearly fifty years ago by local architect, artist, and historian Herb Plasterer. He did not build the golf course, but his children did, finishing the Pacific Nine with views of the Olympic Mountains in 2008 and the Highland Nine with views of adjacent Victoria in 2010. 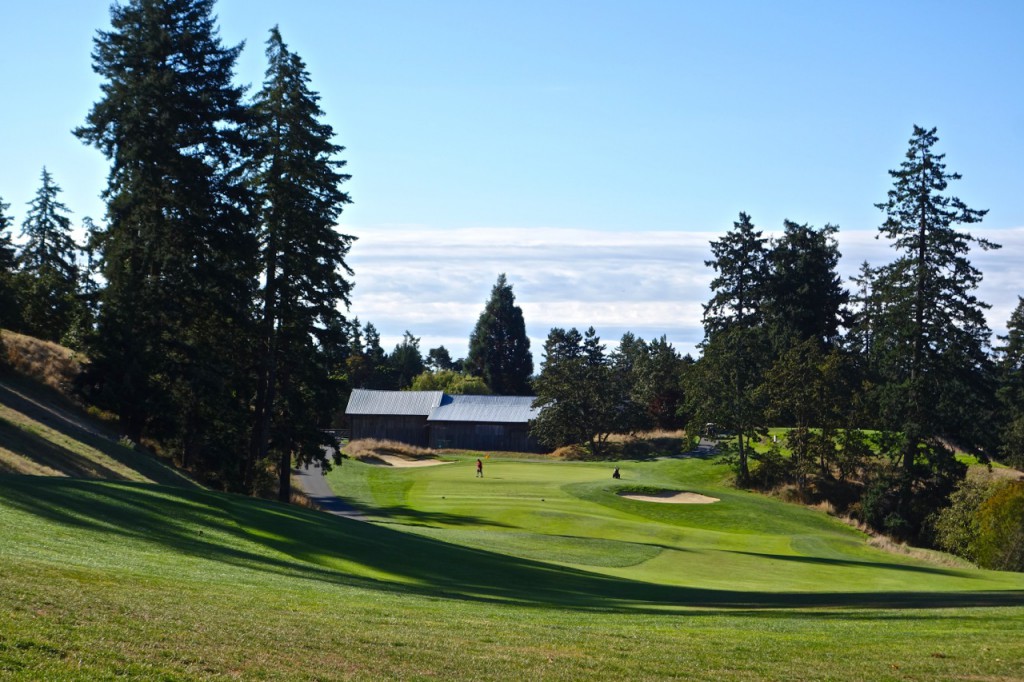 The 10th hole is an engaging little par-four with a glimpse of the Olympic Mountains.  (Photo by Robert S. Fagan)

The first tee and snack area took me about a par-four away from the clubhouse past an interesting driving range complete with a lake and floating golf balls. (Later I was not surprised to learn that this range has been included as one of the Top 100 Ranges in North America every year since opening in 2008.) Someone had spent quite a bit of money here. As the sun was rising, I could see some interesting terrain beyond; the first hole was looked solid, but rather ordinary. Even hitting my approach shot to the first green in the crisp morning air, nothing had yet begun to stir me. That quickly changed and by the par-five fourth tee, my opinion had completely changed. 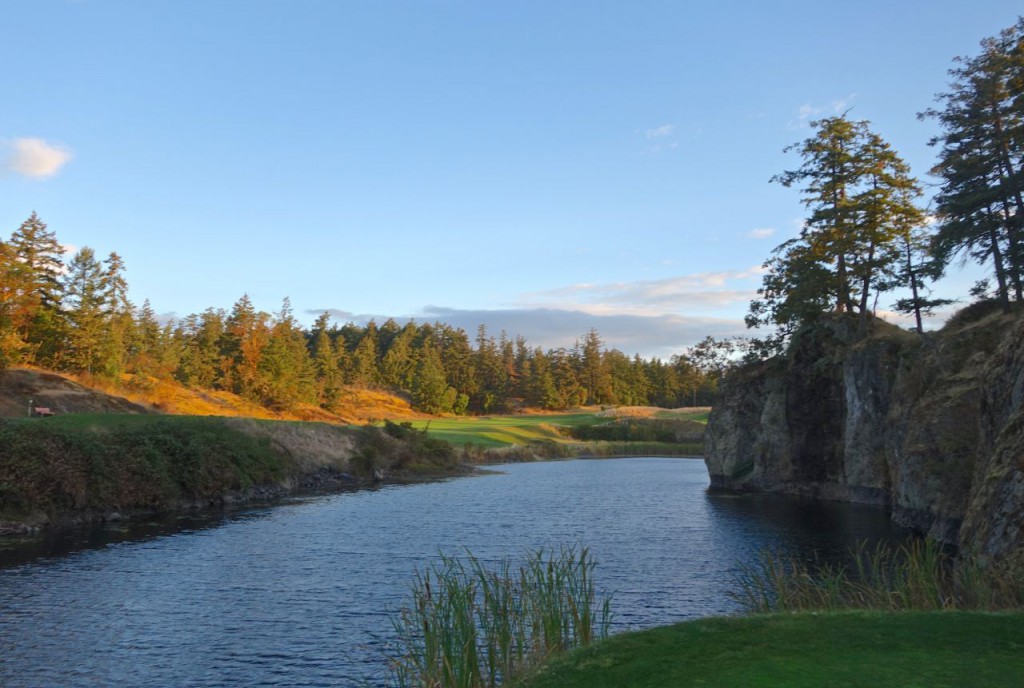 How much of the water are you going to cut off is the first question you likely ask yourself as you stand on the island back tee on the par-five 4th hole.  (Photo by Robert S. Fagan)

What I discovered was not so much the distant views from this elevated property that caught my eye, but the splendid on-course ones with fescue grasses, wonderfully natural outcroppings, punishing drop-offs, pristinely manicured lines and course conditioning, and elevation changes that were not only spectacular to the eye, but thrilling for the golfing soul. 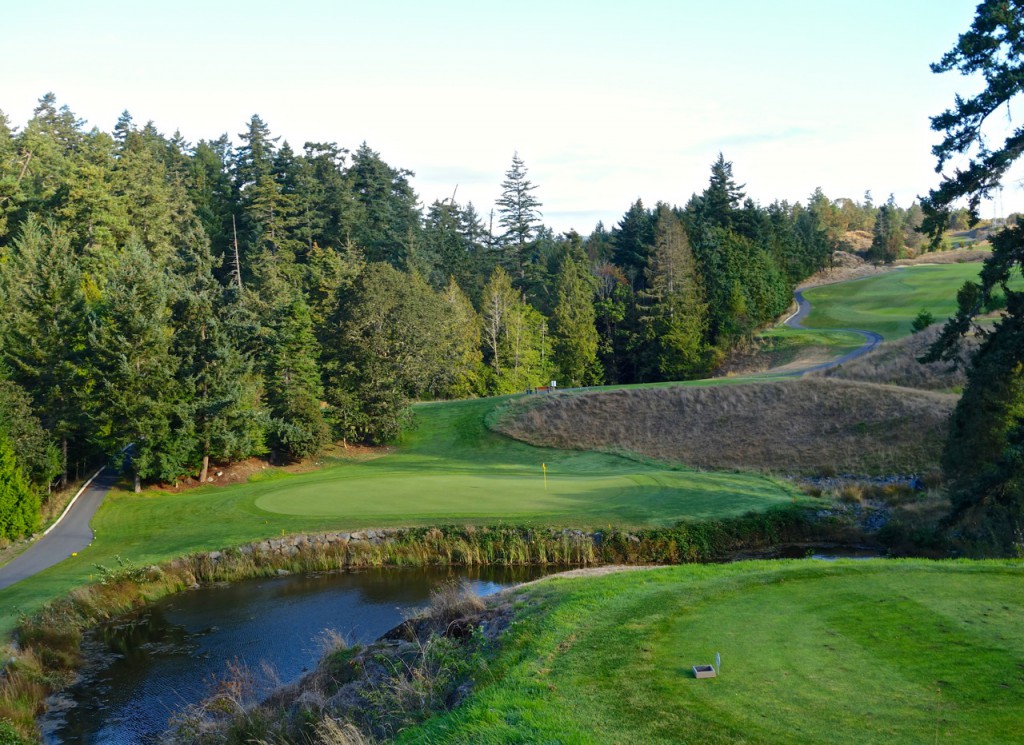 The 11th hole is but one of a quartet of par-threes that play from elevated tees.  (Photo by Robert S. Fagan)

The outgoing nine plays atop the rock and evergreen strewn mountaintop, hence the name “Highland.” With the second tee shot and continuing forward, the course becomes so impressive. As I stood at the back tee of the par-five fourth hole, my thoughts were “Oh wow, how spectacular!” as I glimpsed at what appeared to be a water-filled old quarry area. 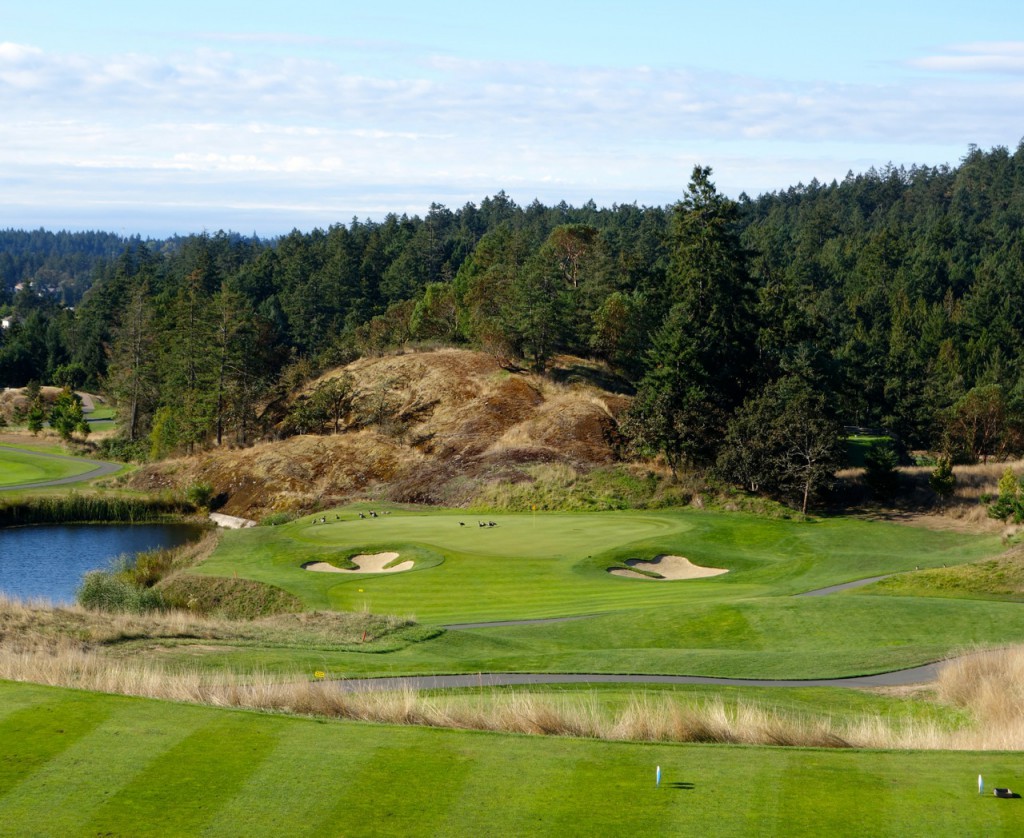 The 17th is the second of two very attractive one-shotters on the Pacific Nine.  (Photo by Robert S. Fagan)

The fifth hole demands its own paragraph and pictures. Quite simply, I call it one of the best short par-fours in British Columbia. At no more than 378 yards, it plays a tad longer for it requires something probably less than a driver for many as the slight dogleg-left drops off to water too far down the center requiring a tee ball of only 200 yards or so.  The approach is made to an elevated  green perched on the edge of a drop-off to water on the right so the trouble is short and to the right. There is plenty of room for safety to the left of the smallish slightly elevated putting surface. With a backdrop of rock outcroppings and pine behind the green, it is as picturesque as it is beautiful. The Highland Nine continues with twists and turns and culminates with a challenging drop-shot of a par-three. Check out the video at:  http://youtu.be/Rno6tvrN2tI. 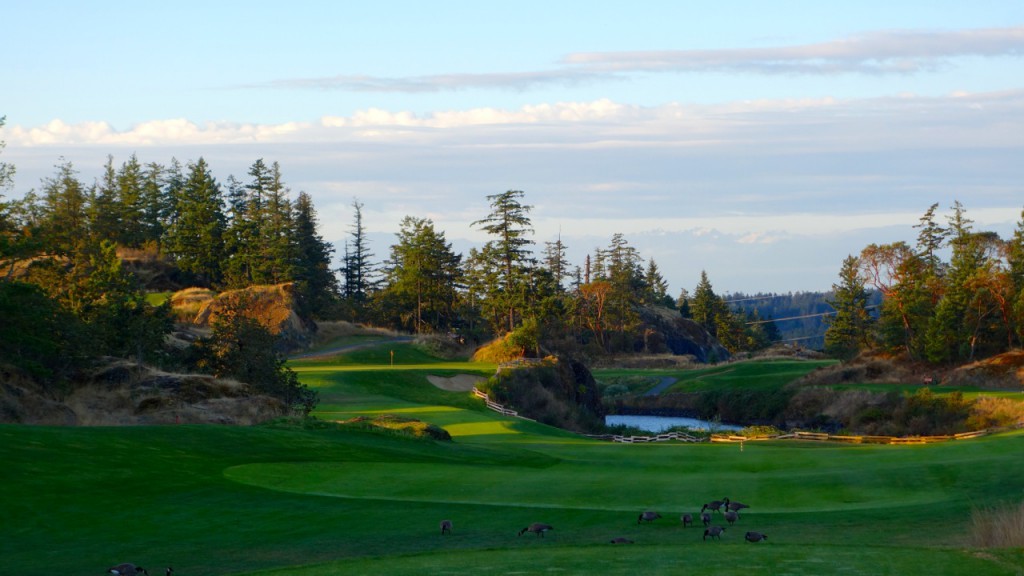 Above and below are pictures of the gorgeous par-four 5th.  (Both photos by Robert S. Fagan) 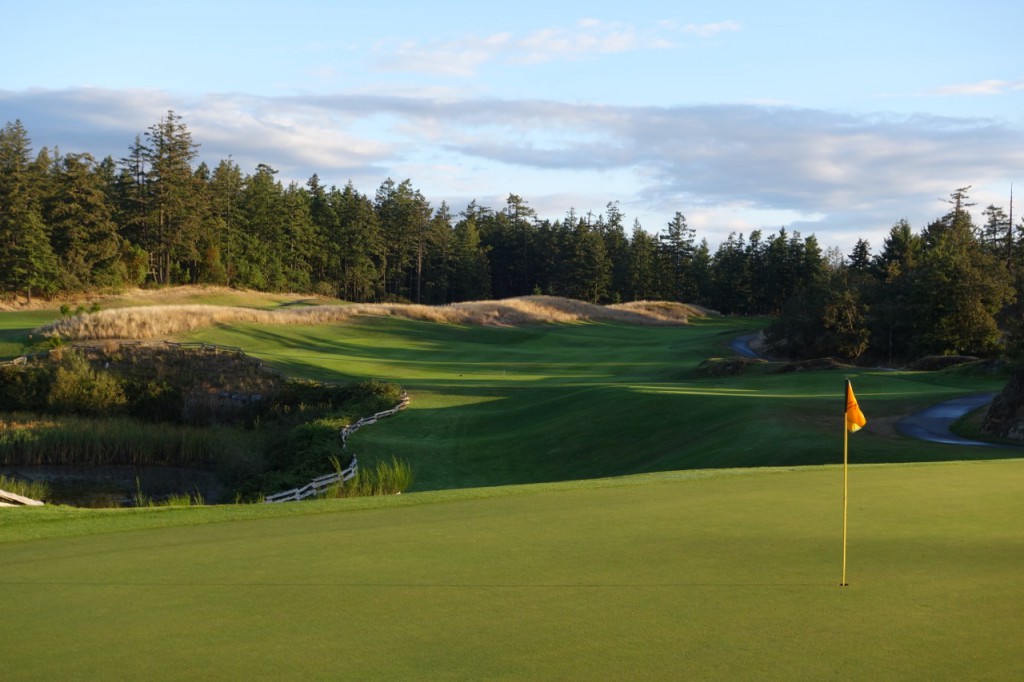 By this point, I was already so pleased to have discovered Highland Pacific, what would the Pacific Nine hold. Situated on a lower portion of the property, the land appeared a little less rugged looking, but the fescue grasses and several scenic though penal drop-offs made the course just as memorable and impressive. In fact, as I was thinking about this write-up, it was too hard to select a most notable hole (I absolutely detest the term, “signature hole”). Two splendid par-threes set up in opposite directions with very differing looks from elevated tees might be one choice. Or I could have chosen one of several challenging two-shotters that all play so different from one another. And no one would fault me for picking the 4th hole on the nine – the longest hole on the course at 562 yards long. The Pacific Nine as the Highland Nine is very playable and scenic, yet challenging.  See the video for this nine at:  http://youtu.be/fsehg9Mon-U 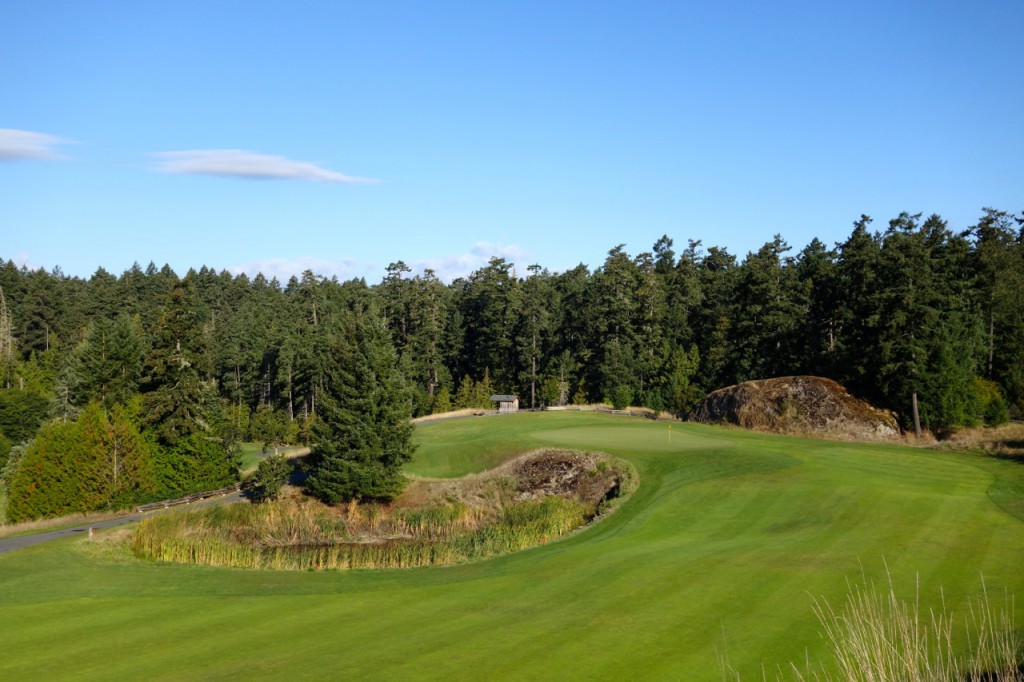 The 4th Hole on the Highland Nine is the longest one on the course and the green’s false front and pit make par a coveted score.  (Photo by Robert S. Fagan)

Highland Pacific enjoys an easy-to-get-to location from Victoria and together with array of wonderful holes and spectacular views along with its value pricing, excellent conditioning, and good playability thrust it into one of the region’s best golf courses – another pleasant Vancouver Island Golf Trail surprise!