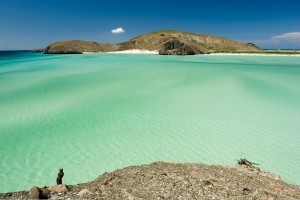 Picture rugged desert mountains with glistening sunsets on one of the most interesting bodies of water on the planet, and then add spectacular golf.  Calm turquoise waters wash the rugged coastline while below the surface exotic creatures live.  Combine that with luxurious lodging, and array of delicious food, and friendly, safe surrounds, and you have the CostaBaja in La Paz, Mexico.  This full-service resort is the epitome of rest and retreat coupled with warmth and hospitality.

La Paz in the southeastern area of the Baja Peninsula has been long famous for its aquamarine activities.  Termed “The World’s Aquarium,” by Jacques Cousteau, I recently had the thrill of enjoying the water, but also experiencing the opening of Gary Player’s CostaBaja Golf Club associated with CostaBaja.  Wow! 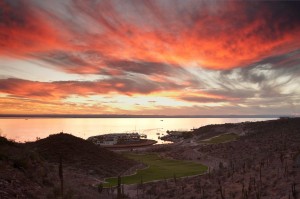 I’ve enjoyed many golf courses in a host of wonderful locations, but this golf course ranks among the most spectacular sites.  Set in the desert mountains overlooking the Sea of Cortez, the Player organization encountered a very difficult site filled with rock and severe elevation changes.  They worked their magic and just a short time later this wonderful golf course emerged. 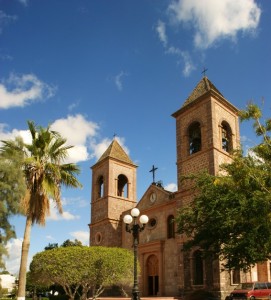 Founded in 1535, the city of La Paz remains a secret to most, but is about to be revealed.  It has long been “the other city” cast in the shadow of busy, noisy, bustling vacation spot of expanding Cabo San Lucas, which is about two plus hours to the south by car.  In contrast, La Paz has been characterized by it quiet, peaceful lifestyle, one which inspired the author John Steinbeck to write his famous novel, “The Pearl.”  Strolling along its beach boardwalk, dining in one of its many eateries, or enjoying the art, sights, music, and people are but a first step to uncovering this Mexican jewel.  This city also has a population of approximately 250,000 people, five universities, and excellent health care facilities.  It is no wonder that the New York Times and Money Magazines listed La Paz as one of the Top Ten Best places in the world to retire.

The golf story here is two-fold.  The lodging has been limited as has been the golf options.  No more. 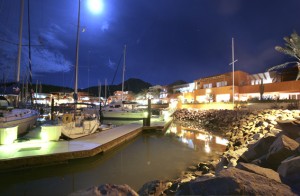 The CostaBaja Marina and shops and restaurants at night.

Less than a ten-minute drive from downtown La Paz is the 550-acre CostaBaja and its adjacent Gary Player Signature golf course.  It is all world-class from the 5-Star hotel to its double-basin 250-slip marina (“best marina in Mexico”), beach club on-site restaurants, and other amenities, making for a scrumptious getaway.  Doubtless, many will be tempted to buy one of the villas or condo that surround the beach, harbor or hillsides; most all with breathtakingly exhilarating views of the Sea of Cortez!

Across from the marina high atop the rugged, arid hillside is the 18-hole CostaBaja Golf Club.  While I’ve already stated it to be a spectacular site with tantalizing views in every direction, it is also a very fine golf course.  This is Player’s first and only Mexican design and his pride in its outcome this time far more than the usual marketing hype. “The landscape of the CostaBaja site in La Paz excited me from the beginning,” Player said. “There is so much contrast in what we were able to create there with the green fairways against the desert conditions and the beautiful blue Sea of Cortez. It is a very strong layout set against such stunning visuals. I just love the different experiences golfers will have throughout their rounds.” 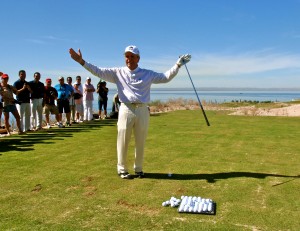 Always the "Showman," one of Golf's greatest competitors, Gary Player, at the opening of the CostaBaja Golf Club - his first and only "Signature Design in Mexico, November, 2010.

From the clubhouse you can see portions of the holes that weave as ribbons of green fairway stretching into the mountains above and then tumble toward the water and homes below.  The Sea of Cortez is in view on no less than 14 of the 18 holes.  To the east are mountains that combine to provide the best of mountain and desert-by-the-sea golf.  Everywhere there are cardon cacti and an abundance of colorful desert flora.

Beyond the views, why did I enjoy and rate the CostaBaja Golf Club so highly?  First, the course is very playable, but with enough challenge to keep your attention.  While Player provided ample fairways and landing areas in most locations, the novice player will still be challenged not to lose balls.  The bright-white bunkering is striking and deep-faced adding an artistic contrast to the green paspalum grass.  There is a pleasant versatility to the holes with the longer ones typically playing downhill and the shorter ones up the slopes.  The total yardage extends over 7,000 yards down to just over 5,000 yards.  Particularly memorable are the elevated tee shots on 6, 7, 9, and the “All-World” 14th, a 612-yard par-five that can be reached by the longer hitters.  However, that particular hole also features the narrowest landing area – comparable to a US Open test according to Gary Player. 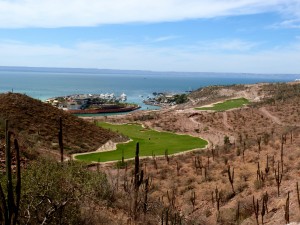 The fantastic view from the back tee on the par-5 14th is just one of many spectacular vistas at CostaBaja.

The most controversial hole may be the 446-yard downhill dogleg-left par-four seventh that big hitters may nearly drive as the hillside spills sharply left and down toward the green situated at the bottom of the slope.  Gamblers have to content with desert area that squeezes the fairway.  Whether it is a good hole or not with its severely downhill approach is debatable, but it certainly is a fun hole that is bound to make one think.  I certainly enjoyed it! 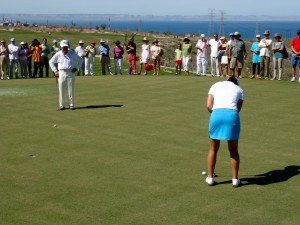 High above the Sea of Cortex and playing their first hole, Mexico's "Golf Ambassador," Lorena Ochoa is about to roll in the first birdie ever at CostaBaja. A few moments later, Gary Player would match her!

The course is well appointed with a clubhouse providing world-class views of the Sea of Cortez, surrounding mountains, the marina, hotel, and La Paz in the distance.  Helping with the golf cause, there is a wide grass practice range also overlooking the Sea of Cortez that makes you want to extend your practice session even longer, complemented by a nice short game area as well.  The layout design essentially requires a golf cart to play because the transitions between holes and elevations make walking impractical.  As for rates, the green fee is $160 with the cart included and room rates start at $149.  By springtime, the golf course conditioning should really round into top shape and make for an enjoyable time, though be aware that the summers are very hot.

Now should all of this pique your interest in living in La Paz, there are seaside and mountain villas and 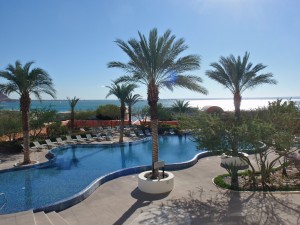 A good place to relax after your round.

condos starting at a half a million dollars as well as building lots for sale.  The local airport has five flights a week to Los Angeles International (LAX) through Alaska/Horizon Air while there are many more flights/connections to Cabo San Lucas, about a 2-hour ride to the south. 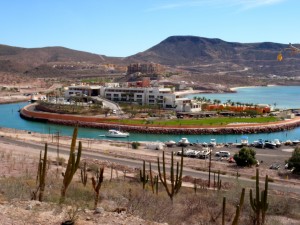 Looking down at the CostaBaja Resort from the golf course.

So there you have it.  I am now another voice in a growing chorus encouraging you to come and explore La Paz.  CostaBaja and the CostaBaja Golf Club make for a spectacular, luxurious, but also safe, fun way to do so.  And tell them that Roberto Fagan sent you! 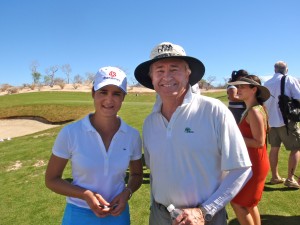 LPGA Hall of Fame member Lorena Ochoa with the author, Bob Fagan, at the Grand Opening of CostaBaja. She played a 6-hole exhibition with Gary Player.