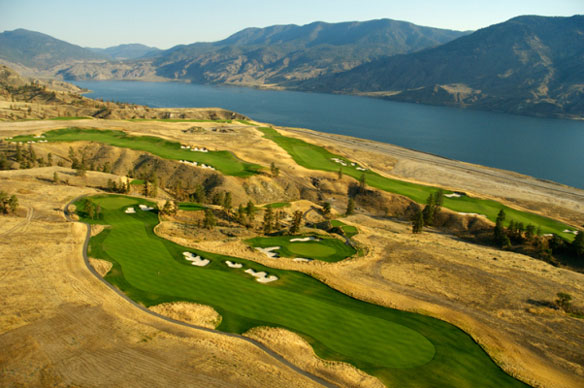 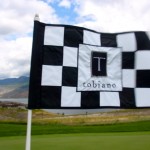 There are really very few courses that qualify as a destination golf course.  By “destination” I mean that a course is so attractive that by its own force, it causes people to want to visit the area just to play that course.  Tobiano is one such course.

Named for the famous painted horses of the American Southwest, you would be correct if you conjured up images of sagebrush, arroyos, and fenceless rolling hills.  Add in mountains, a gorgeous lake, and the tussled high desert terrain and you have Tobiano. 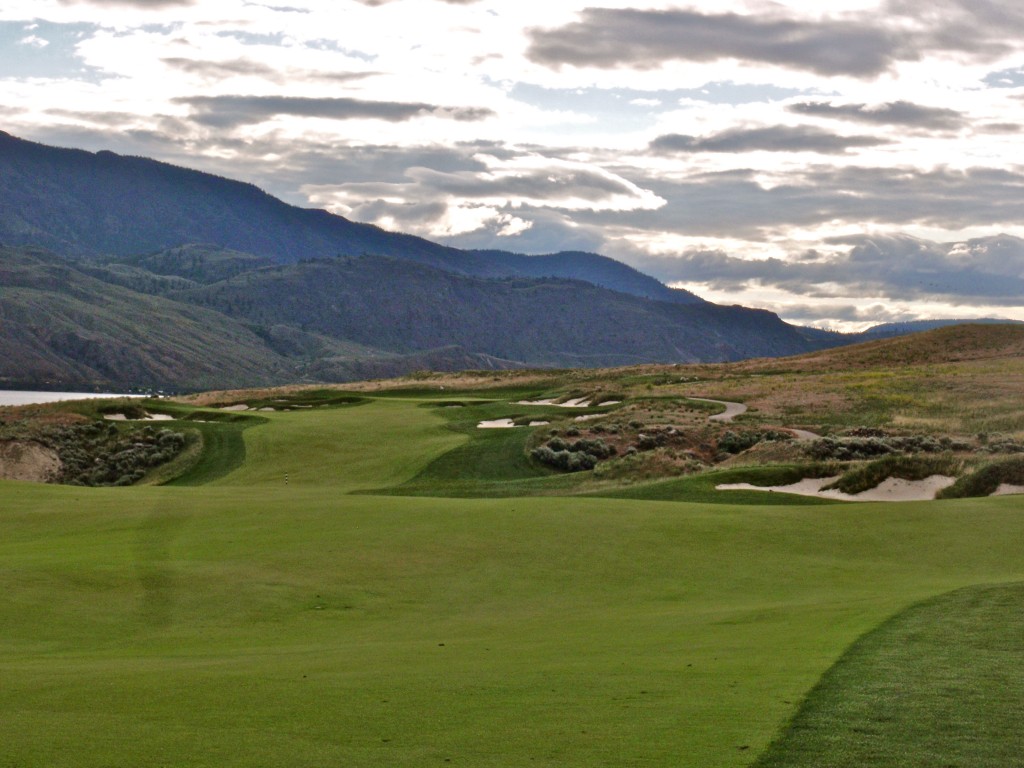 Tobiano is located an easy twenty-minute drive west of the town of Kamloops on the Trans Canadian Highway.  Situated on a gentle bluff of high desert terrain above the south shoreline of Kamloops Lake, this Thomas McBroom-design is really a spectacular test of golf.  Driving out of town, you can begin to see the ribbons of green in the distance and your pulse quickens.  There is nothing to disappoint you once you set foot on this 1,000-acre resort development property either. 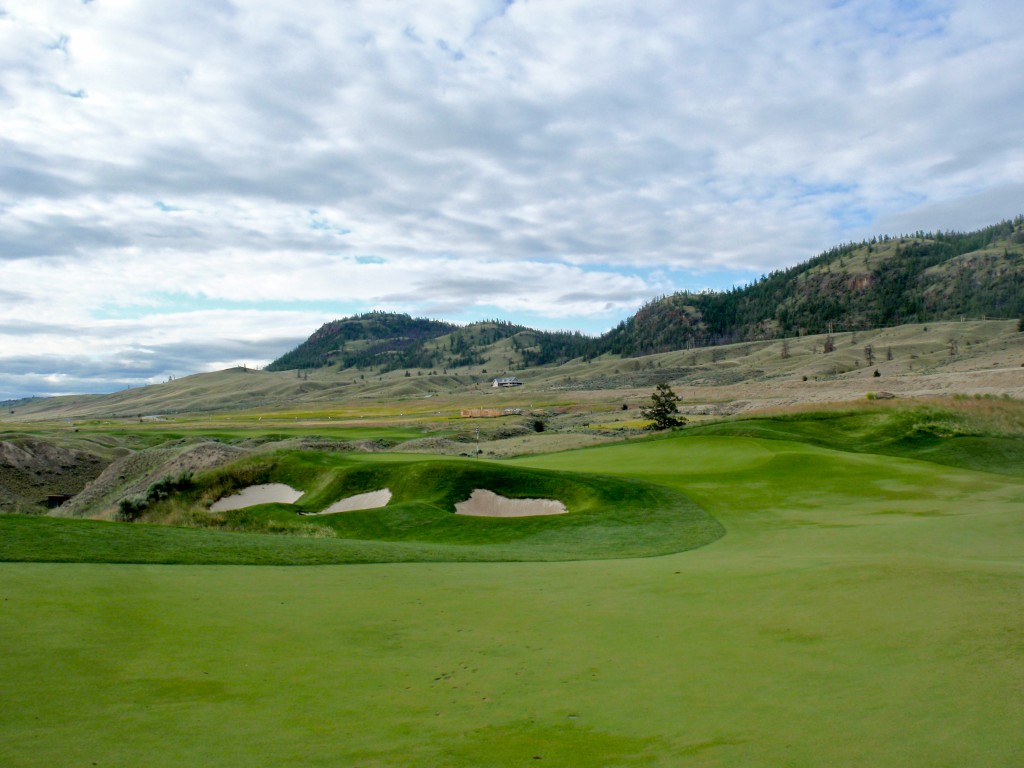 The exacting approach to the short par-four 2nd lets you know that the game is on at Tobiano.  (Photo by Robert S. Fagan)

From the clubhouse, you are treated to a pretty enticing preview of what awaits on this treeless fissured landscape interspersed with gullies.  Links-like in nature, the property is more of what I would describe as high desert ranch land.  Thoughtfully, McBroom did little to alter the landscape, but rather he routed an engaging layout amongst it.  And the fairways do stretch out on this rumpled landscape like green ribbons among the desert terrain and canyons, smartly punctuated by bold bright white ragged-edged bunker complexes.  The putting surfaces appear like suspended green billiard tables above the background Kamloops Lake, which is visible from every hole. 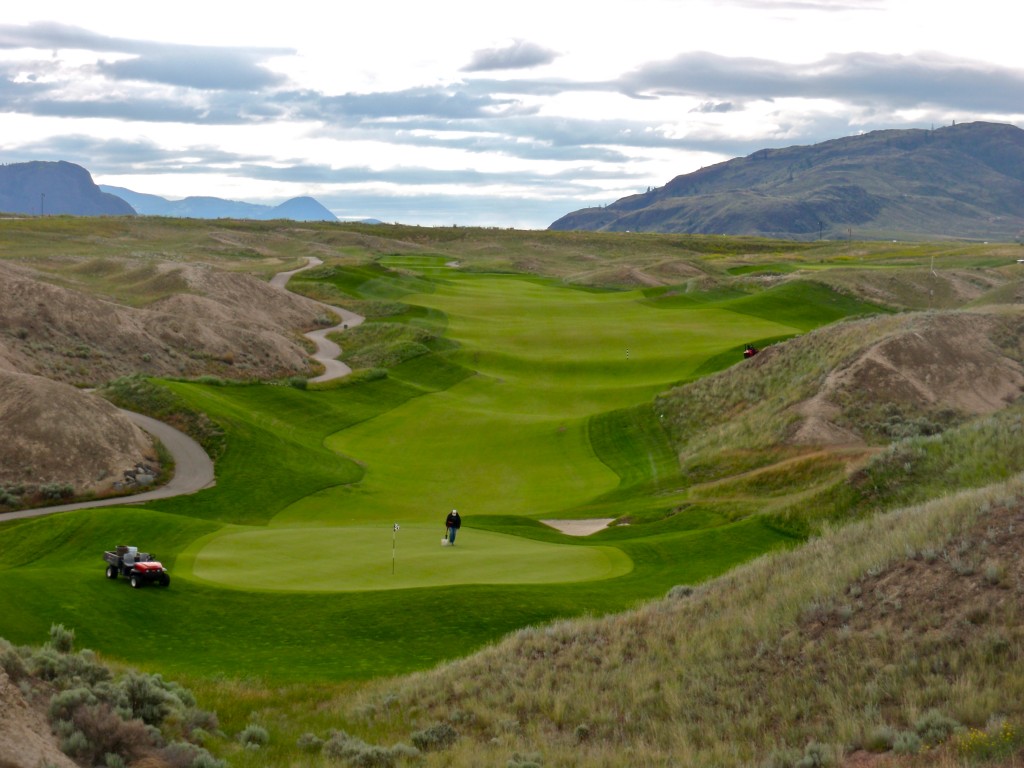 Looking out from the clubhouse, the outgoing nine is to your right back toward Kamloops while the back nine is more to your left.  The quality of the golf is just as solid as the layout is dramatically presented.  McBroom takes you on a tour of this very powerful landscape in, out, and over the desert canyons that cross the property.   The background of the desert, lake, and mountains complement what McBroom has crafted. 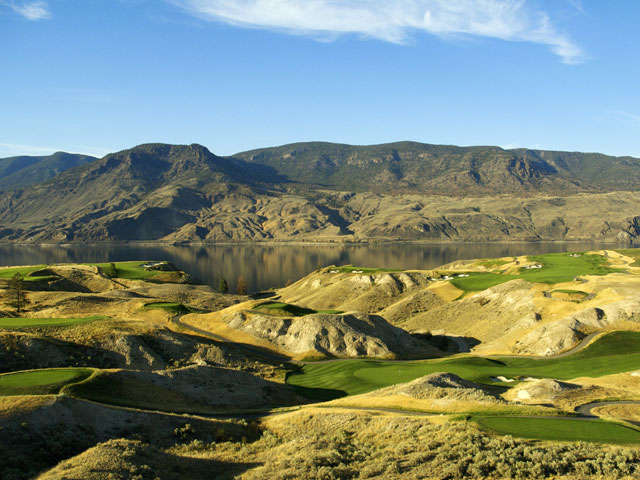 The “All-World” stretch of holes 5-8 are partially featured in this dramatic shot.

Most of the fairways are generous and designed to be played in the often-present wind there, but err into the bunkers and you will be hard-pressed to recover.  And a word about the conditioning – it’s immaculate and plays delightfully firm and fast.  You can use your putter a fair distance off the green should you want.  The other interesting aspect is that McBroom has routed the design to allow for a minimum of uphill holes with the ninth, tenth, and thirteen being the major exceptions.  Most of the holes either cross canyons or you play from elevated tees.  When you throw in the backdrop views, it’s one of the most spectacular layouts in the Western Hemisphere. 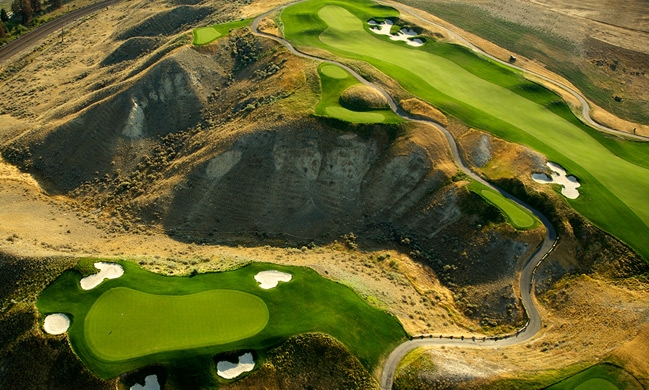 At the top is the “infinity green” of the par-four 6th and the tees to the par-three 7th.  The shallow 7th green is at the bottom of the picture across the “forced-carry” canyon.

As far as the holes are concerned, there is nary a weak one at Tobiano, but my favorites were the stretch between the fifth and the eighth, which is no less than “all-world.”  Playing between canyon walls, then across them, McBroom features two par-fours, a spectacular one-shotter, and an equally impressive par-five that are sure to “wow” you provided you have any sort of pulse. 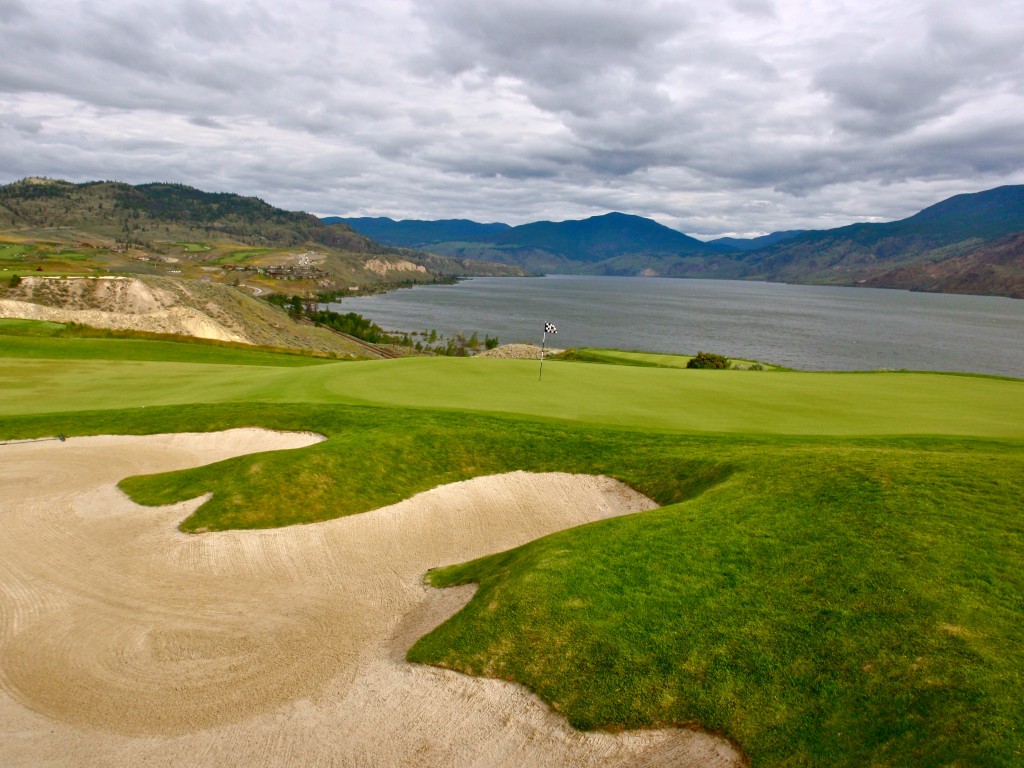 The layout plays from 5,358 to 7,367 yards and most golfers would be advised to play at the middle markers (6,616 yards) or shorter lest you be promptly humbled.  While very playable, it is not so docile that you would want to begin your golfing career here, though because of the scenery you would certainly be tempted. 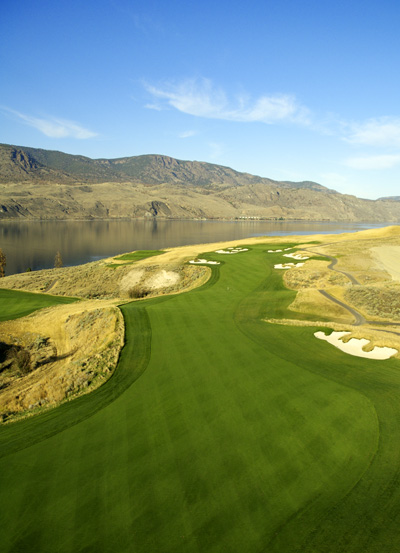 The home hole at Tobiano.

While flying into Kamloops makes the most sense, visitors to Kelowna less than a two-hour drive to the south will tempted to visit here as well.

I can’t imagine a golfer leaving Tobiano not being extremely impressed. 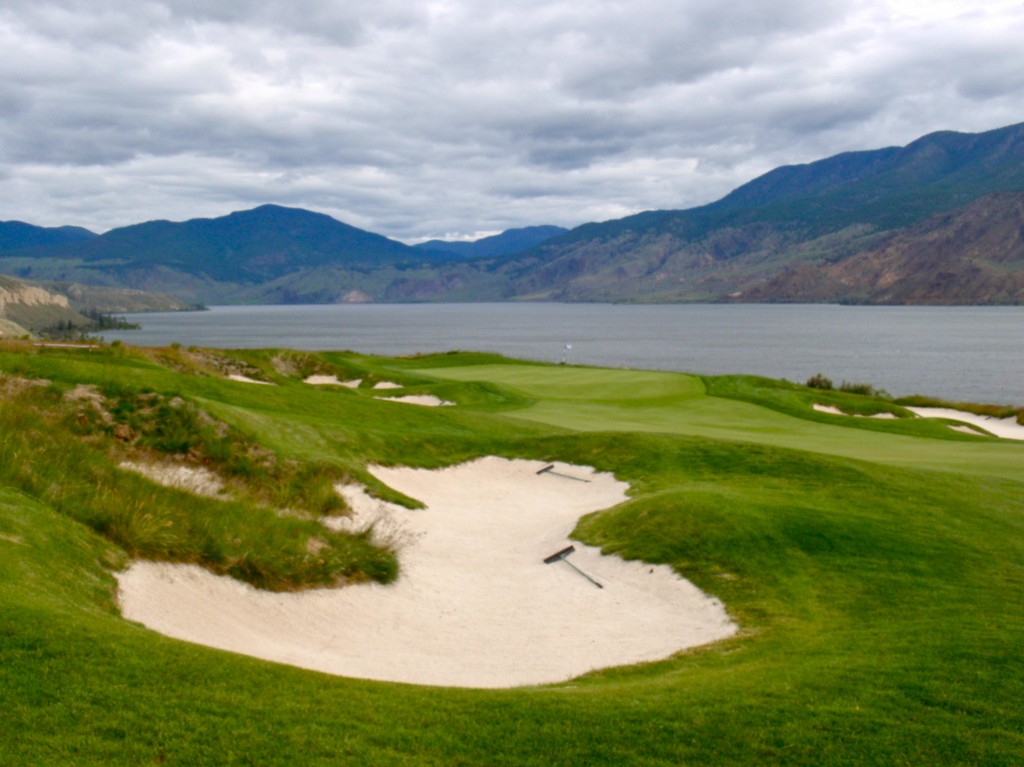 Recoveries are difficult as shown by the finish of the spectacular par-five 8th hole.  (Photo by Robert S. Fagan)

Fagan Rating:  A. Tobiano is one of the most uniquely ruggedly beautiful golf courses you will likely ever encounter.  It is as much fun to play as it is to gaze upon or photograph.  It is demanding though fair and features an excellent routing, pleasant flow, great shot values, and as you can tell by the photographs is very memorable and aesthetically pleasing.  As such, Tobiano should be included in your “Bucket List” of courses to play. 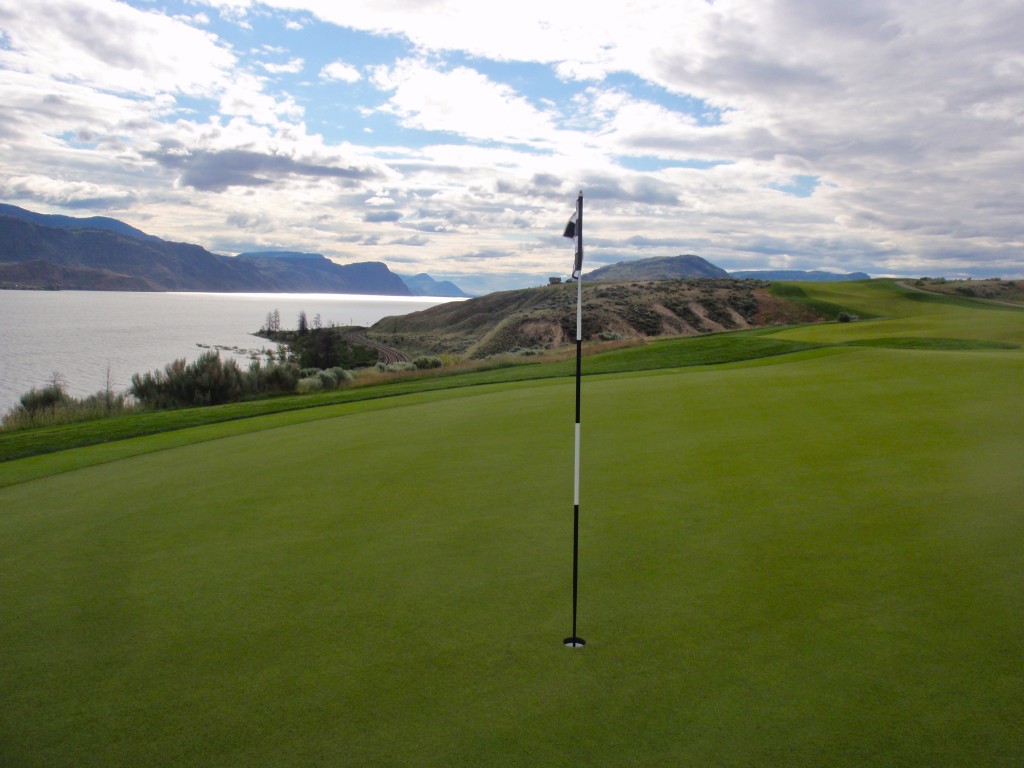 Looking eastward from the 8th green in the direction of Kamloops.

Below, at 155 yards, the 15th is the shortest hole at Tobiano, but is not short on its eastern view!  (Photos by Robert S. Fagan) 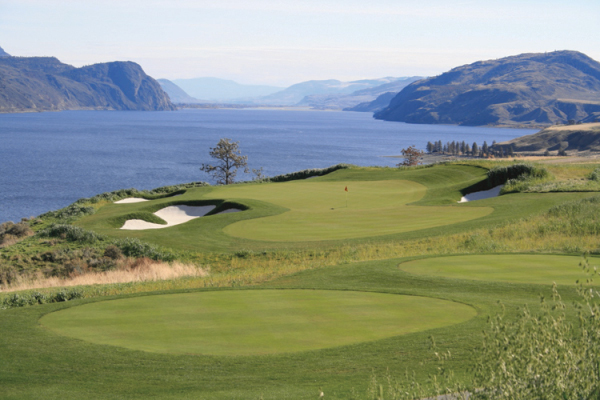