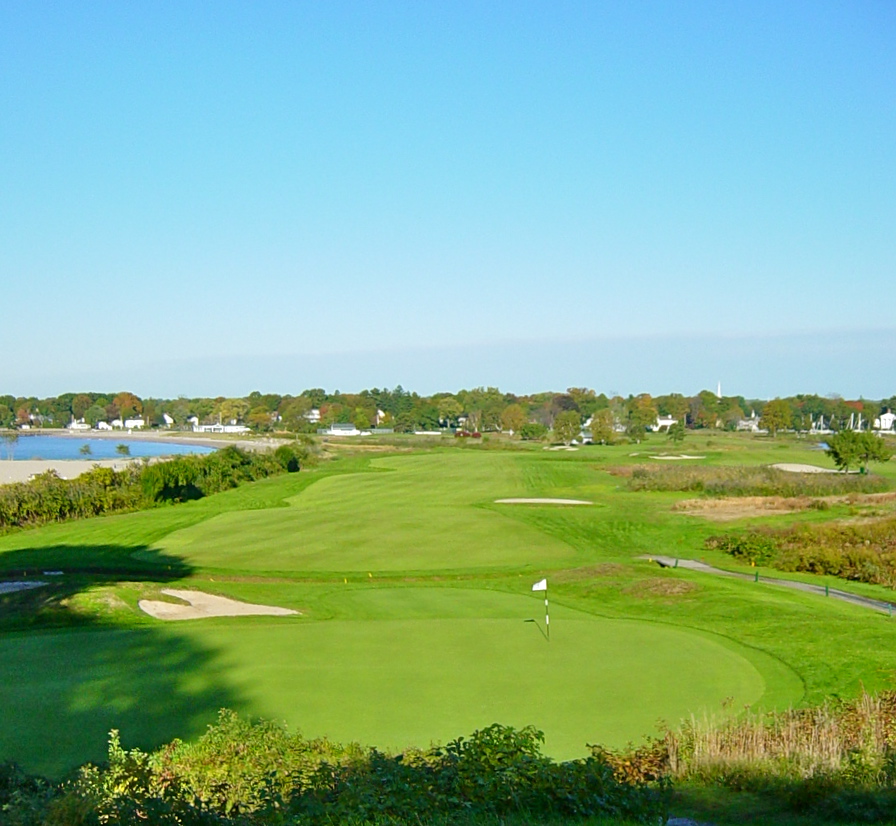 Looking back down the par-five 8th hole at the wonderful Country Club of Fairfield. (Photo by Robert S. Fagan)

The Country Club of Fairfield is one of those special exclusive private golf clubs that inhabit the northeastern United States.  Opened in 1921, it is located on a spit of land adjacent to Long Island Sound that was once onion fields and marshes.  Highly regarded golf course architect Seth Raynor in one of his first solo efforts fashioned a wonderful linkstyle layout that ranks with the best “hidden gem” courses in America.  Speak to any local golf professionals in the metropolitan area about great golf courses and mention the Country Club of Fairfield, and their eyes will inevitably light up.  Despite its overall short yardage, it has admirably hosted many a high-level local competition.  In the land of magnificent golf courses that surround New York City, this Connecticut layout easily ranks alongside the best of them.

The property was once known as “Mosquito Hill” due to its proximity to the swamps, and before a golf course could be built, a massive landfill was necessary to fill in the swampland on the lower part of the property.  “CCF” is just another example, albeit an early one, of golf transforming an ugly piece of unusable land into something artistic and fun.

The look and feel is one of a low-laying course with mostly flat bunkers.  There are no steep push-up greens as one would encounter at Raynor’s Yeaman’s Hall outside of Charleston – due to the cost and availability of fill in the area at the time.  Raynor took what nature provided for as you encounter the hill on the east side of the course, you will find some deep bunkers carved into the side of the hill.  Otherwise the layout is a peaceful mostly flat walk in the same unforced manner and look of the inland holes at Long Island’s Maidstone.

Unlike many old layouts that have been lengthened and stretched their frames to accommodate the few powerful modern players, the Country Club of Fairfield caters to its membership, the 95 percent of players who play the game.  Its 6,400 yards may first appear as a pushover, but with good strategy, fast greens, and the breeze by its waterfront location, it is usually testing and always interesting.  And when the breeze turns into wind, the layout becomes downright tough as there is nothing to impede this invisible defense.

The likes of A.W. Tillinghast, Robert Trent Jones Sr., and Bruce Hepner have refined the layout with Tillinghast moving the par-three 4th green right up next to the water hazard for a rather intimidating little shot and also moving the 6th green closer to the adjacent lagoon.  Jones then adjusted the fifth hole to play more to the water in the same manner as Tillinghast had earlier done.   Jones’ also revamped the order of the routing and suggested some other changes that the club’s maintenance crew affected.  And that treacherous eighteenth green is Jones’ design.  Hepner’s contributions were more to restore the look and feel of the course to its original design.  Many trees that had overgrown the landscape and impeded the views were thankfully removed.  Today the architectural spirit of Raynor continues to shine.  As was his style, he copied many of his other famous holes and would often employ angles and provide choices to constantly make you think – a reason why Fairfield is always so entertaining and timeless.  One could even say the layout is invigorating! 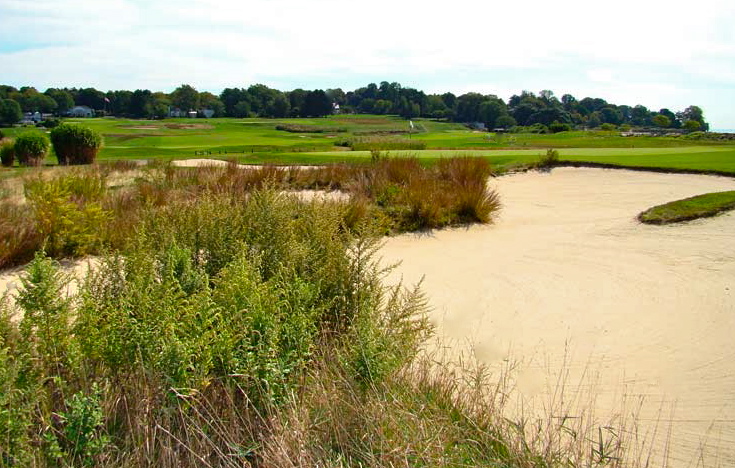 Looking toward the 7th green. (Courtesy of Bill Clymer.)

Aesthetically, rich textures and contrasts greet the senses at the Country Club of Fairfield that combine the green fairway ribbons speckled with the white bunkering and the rugged brown fescue and then the blue waters and verdant swamps.  Golf around the Country Club of Fairfield defines a “great walk” and is an idyllic spot that reminds me of the best British Isles golf experiences.

Fagan Grade:  The Country Club of Fairfield defines traditional playable, yet challenging golf at its finest.  The membership has thoughtfully and successful kept the luster on the gem that I would call one of the Western Hemisphere’s best seaside golf courses.  There is nothing forced or artificial and the conditions are usually excellent.  I consider CCF to be quietly the best all-around golf course in Connecticut and one of the game’s best walks.  If you should ever be fortunate to gain an invitation to play here, by all means take advantage of the opportunity.  Its golf course is a model for others to consider.