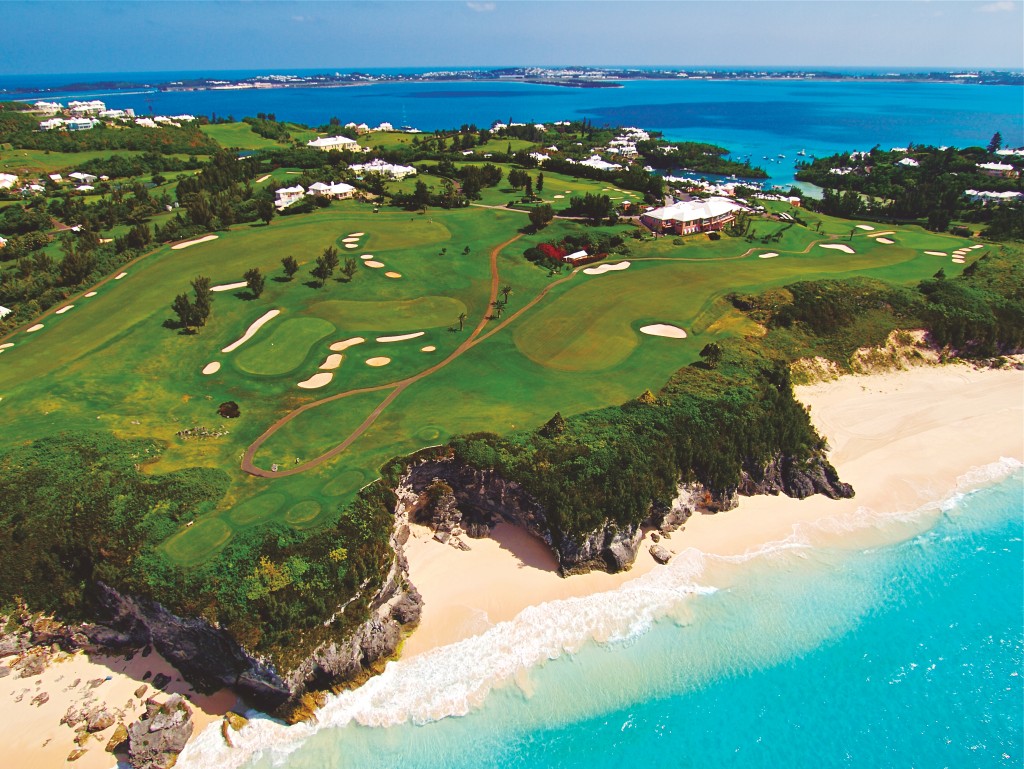 From the left to right, the first, seventeenth, and eighteenth holes play around the Mid Ocean Club’s clubhouse.

In the entire world outside of America and the British Isles, there are few compelling examples of truly outstanding classic golf course architecture, but the Mid Ocean Club stands tall, maybe taller than the rest. Built by American Charles Blair Macdonald and opening in 1921, this private club course defines classic and semi-tropical beauty that remains as entertaining and valid as it did the day it opened.

For those not familiar with Macdonald, he might be called the Father of American Golf. A player, a leader, and a golf course architect, he studied the great holes in the British Isles and his copies are often considered as good or perhaps even better than many of the originals. Much of his work featured these holes and Mid Ocean is no different. The Mid Ocean copies rate among the best of his work, particularly the par-three holes. 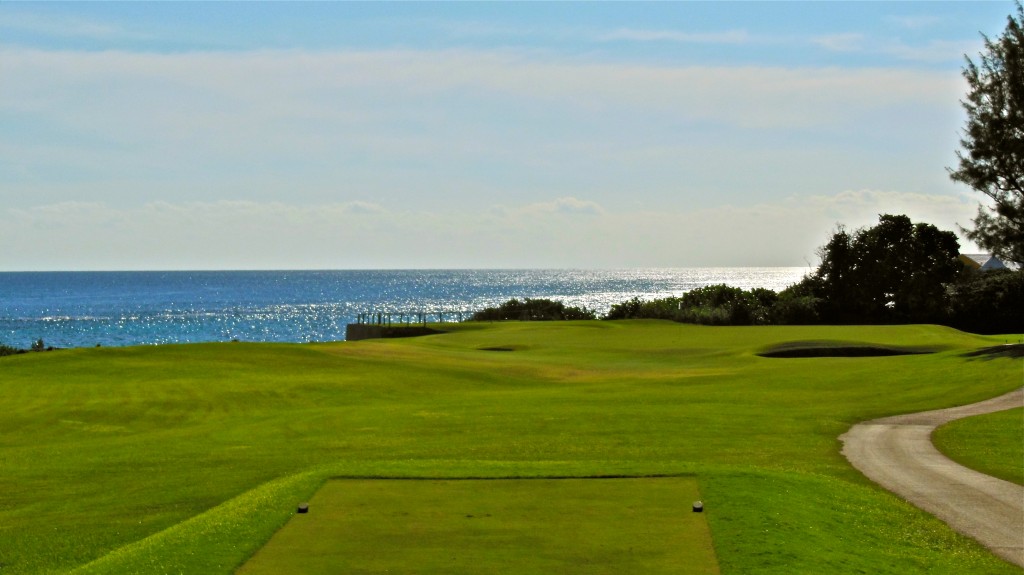 The Eden (third hole) plays toward the ocean and begins a quartet of architecturally interesting one-shotters. This is the closest putting surface to the ocean. As the flag suggests, the ocean breezes are the invisible challenge.

Macdonald was originally brought in to build a golf course to help develop Bermuda as a tourist destination from North Carolina for the Furness Withy Steamship Company. Though his friends favored that he work in Cuba, he chose Bermuda. After scouring the Island, he fell in love with the Tuckers Town property, which included thick forests and two lakes. As is typical, his courses were “manufactured” to accommodate his greensites and quirky design aspects, but somehow they magically work. (It should be noted that his Mid Ocean team included chief engineer Seth Raynor who went on to become an equally accomplished golf course architect and Charles Banks who designed the adjoining Tuckers Point Club.)

Built upon hilly terrain on a site adjoining the ocean, the course really features only one ocean hole (18th) and another green (3rd) and tee (4th) that border it. And yes, the course is walkable with short distances between holes. While it possesses many views of the water, the adjacent Tuckers Point Club course has even more commanding vistas, yet the ambiance, strategy, landscaping, and quirky lines at Mid Ocean make for an idyllic setting and a relevant engaging challenge. In keeping with its semi-tropical setting the Mid Ocean canvas is a scenic one with  oleanders, bougainvilleas and hibiscus complementing its forested areas. Set above the clubhouse, the first tee occupies one of the highest points on the property with the totally exposed first green being the highest.  You head out on a golfing adventure on the 418-yard opening hole that has no less than 22 bunkers gracing its topsy-turvy terrain – simply one of golf’s great opening holes. Yes, you are in for no ordinary round of golf as evidenced by the 8 made by Angel Cabrera in the 2007 Grand Slam of Golf contested here.   Mid Ocean is not your typical club. An interesting aside, as you will note on the scorecard, there are no out of bounds. “Please do not damage plants while search for, or playing a ball from private property” reads the scorecard. Continuing in keeping with plant care, it is “compulsory” that balls in flower bed get relief. And make no mistake, in bold letters “there are no later water hazards.” These are just some of the rules at “MOC.” And this is a club where gentlemen remove their hats inside and jackets are the minimal uniform of the evening. 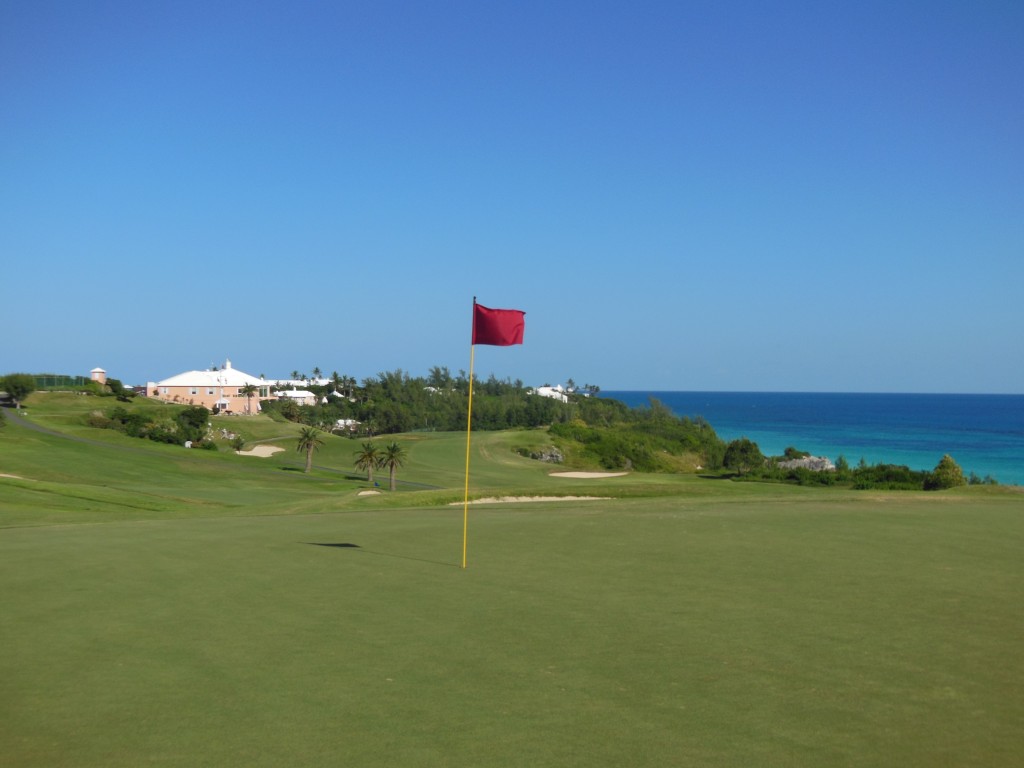 Putting is anything but routine as you will immediately discover on the first green at the Mid Ocean Club.

Yes, the first three holes and the last two play in full view of the ocean, but the rest of the layout is just as engaging. The par-71 layout is presented in a relatively modest 6,530-yard package with the 504-yard Punch Bowl 15th the longest of the lot. (Robert Trent Jones Sr. lengthened the golf course in 1953 and turned this hole into a par-five adding 85 yards to the hole). None of this will likely intimidate today’s long hitters, but there’s plenty of challenge for most of us as the two-shotters are relatively long with many playing uphill. It is the putting surfaces that will give many of the better players notice that breaking par is not a given. Plateaus, false fronts, ridges, dips, and some canted surfaces along with uneven approach lies keep you on your toes if you hope to score well on these quick, well-maintained surfaces.  It should be noted that Macdonald used that invisible defense, the wind, to serve and affect strategy on his masterpieces and that is ever so the case with Mid Ocean where you can usually expect a good dose of it. Play it on a calm day, and this will be your time to score. 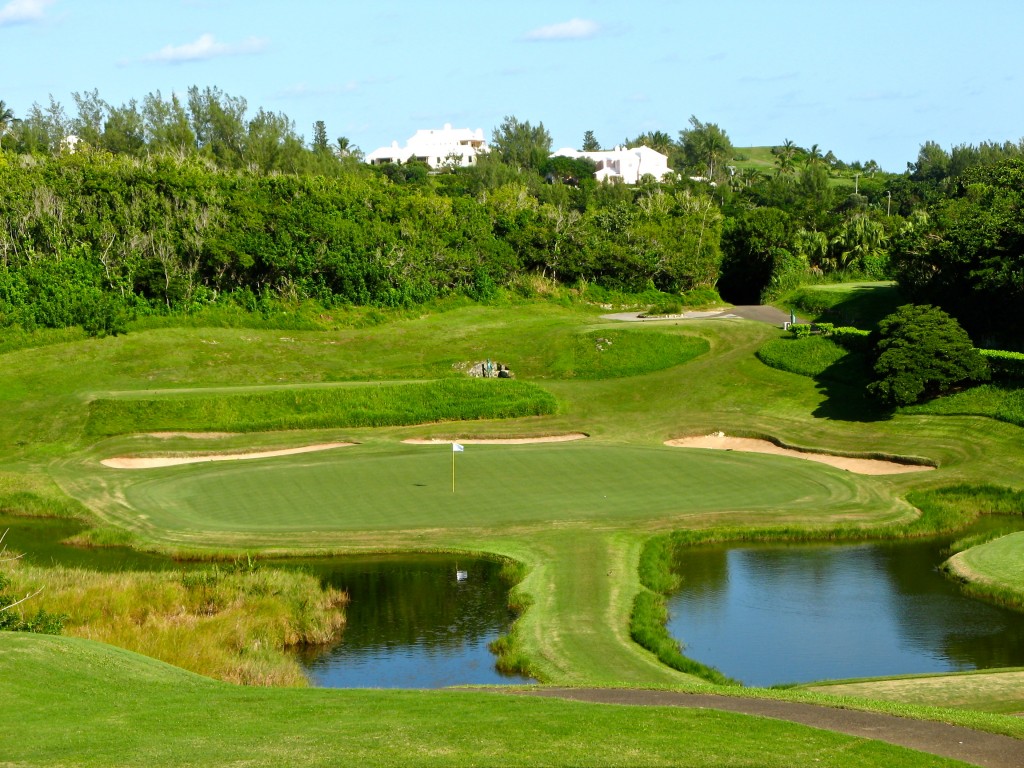 The Short – the par-three 7th hole from the tee and below is the view from behind the green. 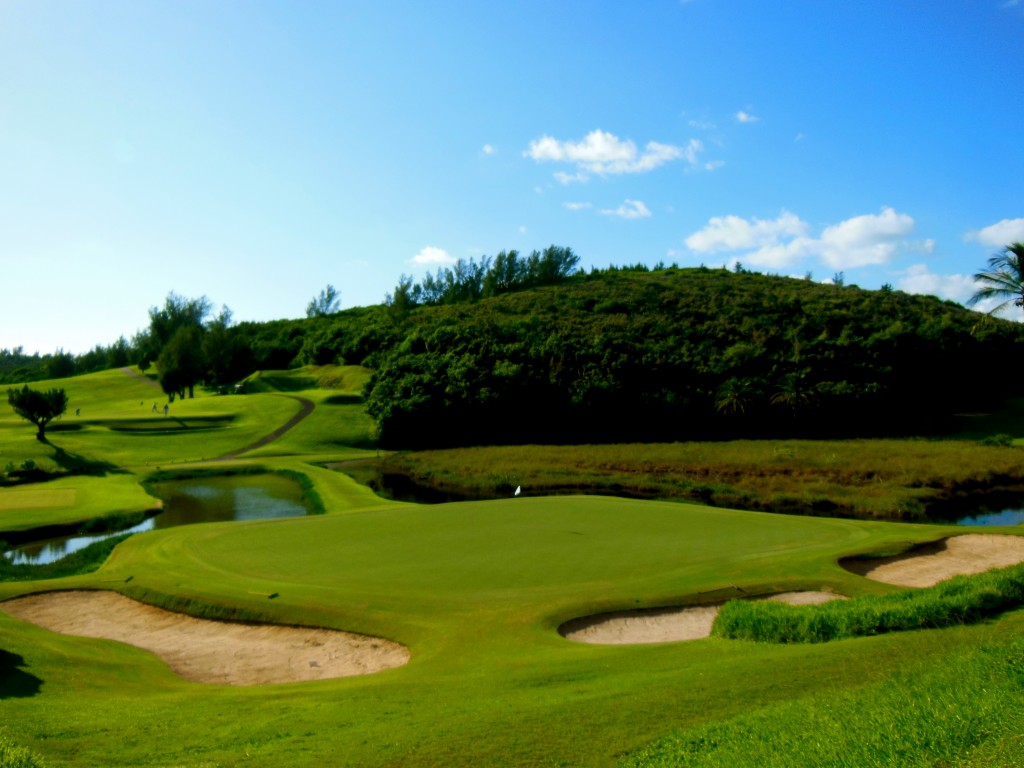 The quartet of par-threes with the Eden (3rd), Short (7th), Biarritz (13th), and Redan (17th) ranks among the best in golf. Jones also added length to the Short so that the short iron today likely matches the same clubs used in Macdonald’s day.  The Eden plays right to ocean cliffs edge. If you have ever played other Macdonald courses, you will immediately recognize the Biarritz, though the Club has only maintained the back half as the putting surface, perhaps for the cost of maintenance or maybe the fear of a shorter overall course yardage. There is no better Redan for me than Mid Ocean’s. You are introduced to it just to the left of the first tee so you know you will be visiting it late in your round. With its sublime views and shadows cast by a setting sun, it ranks with the best you will likely ever play. 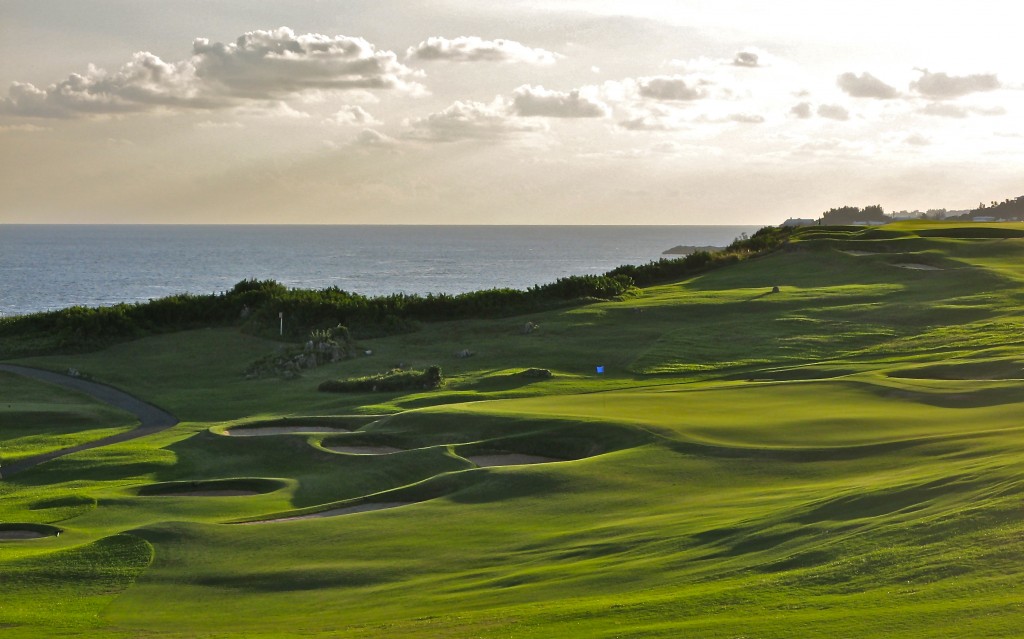 If there is a weakness for Mid Ocean, in my opinion it is the three par-fives that don’t quite translate as effectively to the original ferocity of the original Scottish holes with second hole minus its Hell Bunker as a good example. The two-shotters feature all sorts of postures, personalities, and cheekbones so to speak. Playing them is like being at a dance and enjoying a twirl with every belle – an engaging time that passes quickly. 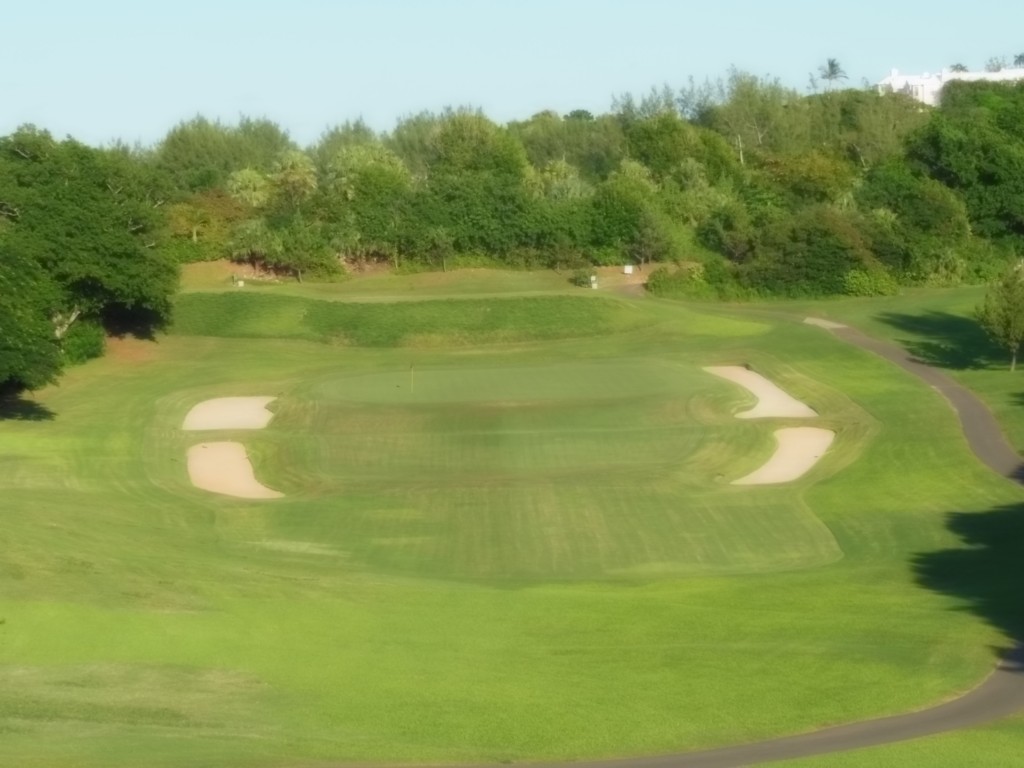 The Mid Ocean Club maintains only approximately the 40% rear section of the general area of the 238-yard Biarritz Hole (13th)as a putting surface. All of the area is maintained at some other renditions. If they were to do so, the yardage of the hole (and course) would shrink as well as there would be the obvious added costs of maintenance.

I will resist the temptation to go into a further treatise of the wonderful architecture that is on display at Mid Ocean, but cannot leave the par-four 5th or Cape Hole alone. The idea behind this hole is that the fairway is angled slightly over a hazard (Mangrove Lake here). The more the golfer cuts off, the closer they can get to the green and the closer they play to the water, the better angle they have into the green. I have seen pictures of this hole since I was a teenager and have heard the stories of baseball legend Babe Ruth being goaded into trying to cut off the entire pond only to lose a reported eleven ball (pictures of him adorn the clubhouse), but the real thing was even better. Though vegetation has been allowed to grow by the water’s edge, the tee shot elevation was even higher than I had imagined, and the putting surface was far more severely canted as well. Though the 433 yards plays far shorter due to the drop and modern equipment, the design theory still shines. Not only is the hole visually spectacular, but it is really fun as well. Even you aren’t previously aware of its history or cognizant of its design theory, it’s an “Oh Wow!” golf moment. 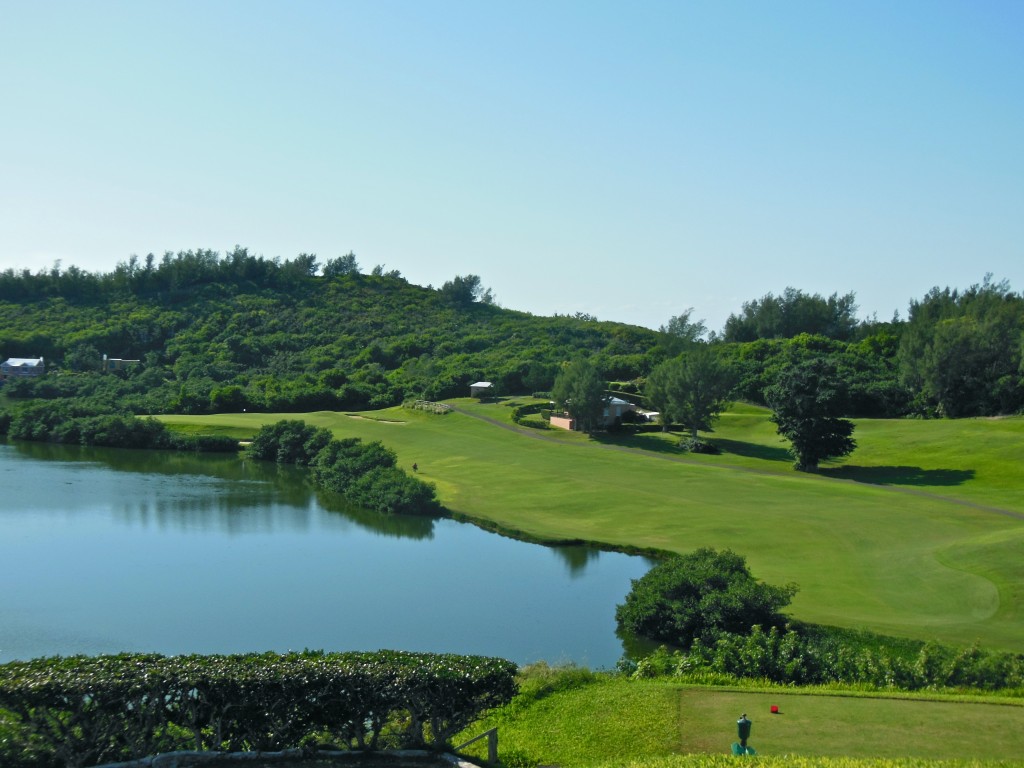 The tee shot at The Cape (5th) tempts you to cut off as much as you dare while the greensite below reveals a much more sloped, canted putting surface as you get closer. 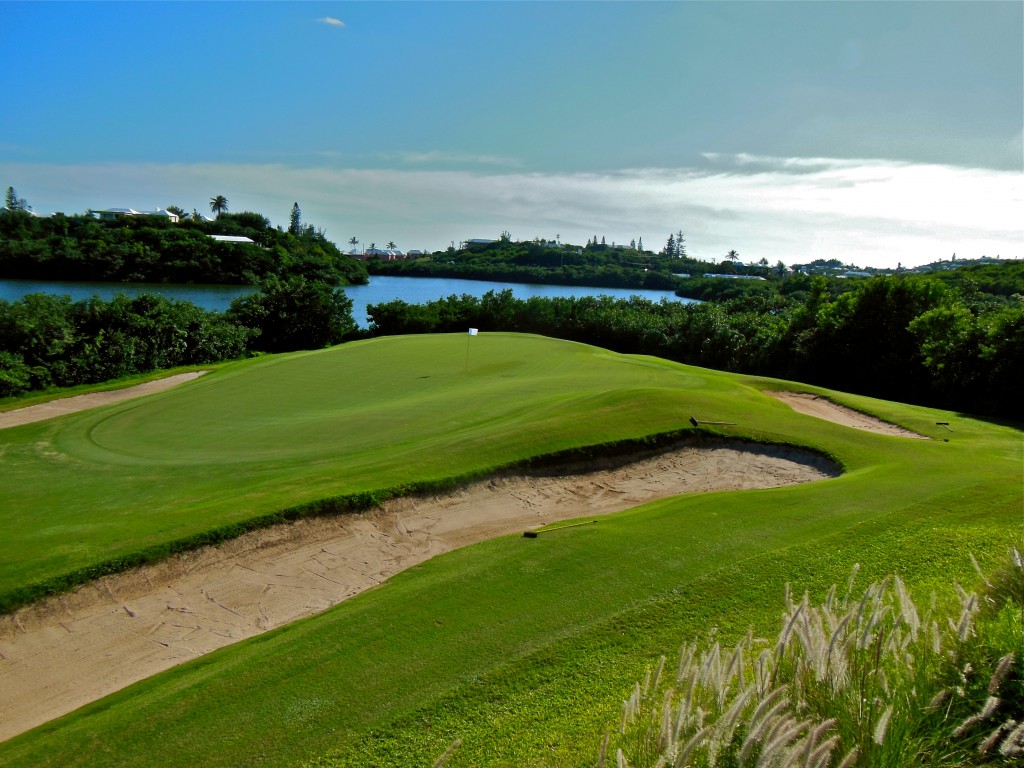 Fun and exercising your creativity is the common thread in playing all the Macdonald layouts. In 2008, architect Tom Doak came in and restored the firm quickness to the putting surfaces again emphasizing the angles, placement, and strategy that is so integral to the Mid Ocean Club magic. There are blind tee shots, automobiles passing by, and angular shapes fashioned into the landscape – and it all somehow fits. 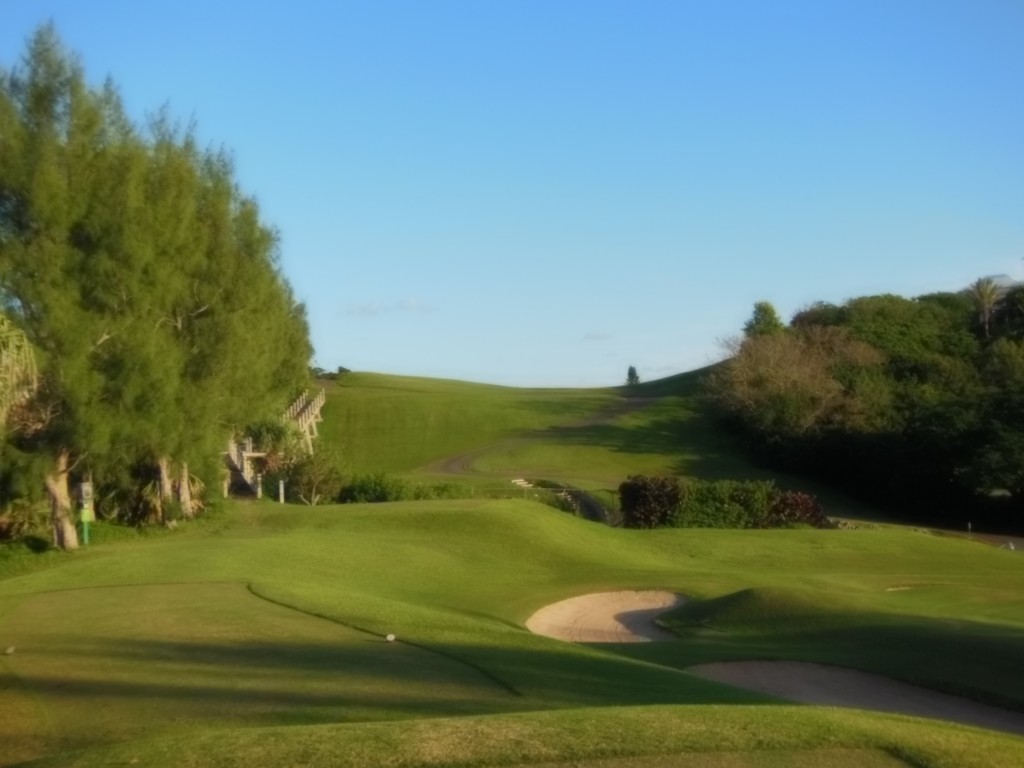 The blind tee shot on the par-four 16th is one of several at the Mid Ocean Club.

Mid Ocean is a private club, but thankfully advance arrangements can be made to play there through several of the hotels or alternatively being a guest of a member. The setting is only equaled by the tradition that its membership lovingly carries forward. Like Bermuda itself, Mid Ocean is dignified, friendly, beautiful and engaging – a puzzle that you never tire of and look forward to revisiting. If you are looking for a longer golf course, there are many others to consider, but if you prefer a magical walk, one with character with a capital “C,” and a challenge that never gets old, the Mid Ocean Club ranks with the World’s best. It has and will continue to define the standard of golf in Bermuda and beyond! 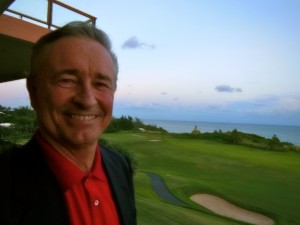 Author Bob Fagan is framed by the Mid Ocean Club’s 18th. He has played more than 2,600 courses at the time of this writing, many of the famous and remarkable ones, and counts Mid Ocean as one of the best.