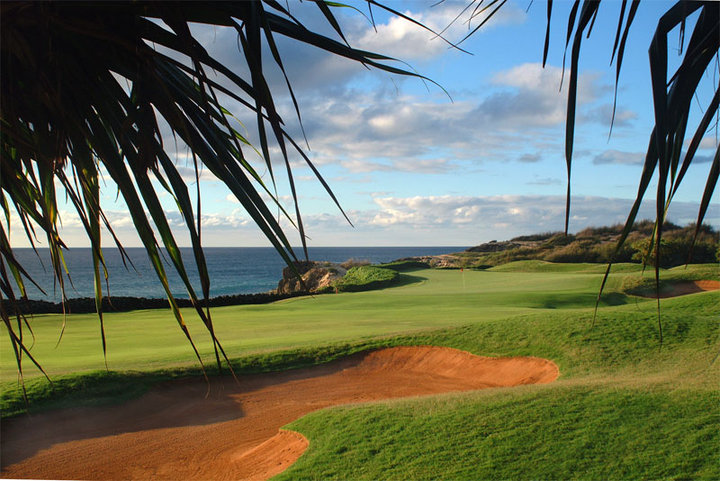 The long par-four 16th at Poipu Bay evokes comparisons to Pebble Beach and is one of the world’s great golf holes.

Set alongside the very comfortable surrounds of the Grand Hyatt Kauai Resort & Spa, you have to believe that golf course architect Robert Trent Jones, Jr. had to be salivating when chosen to design Poipu Bay. This is one splendid design of a golf course that is one of the “must-plays” when visiting Kauai. 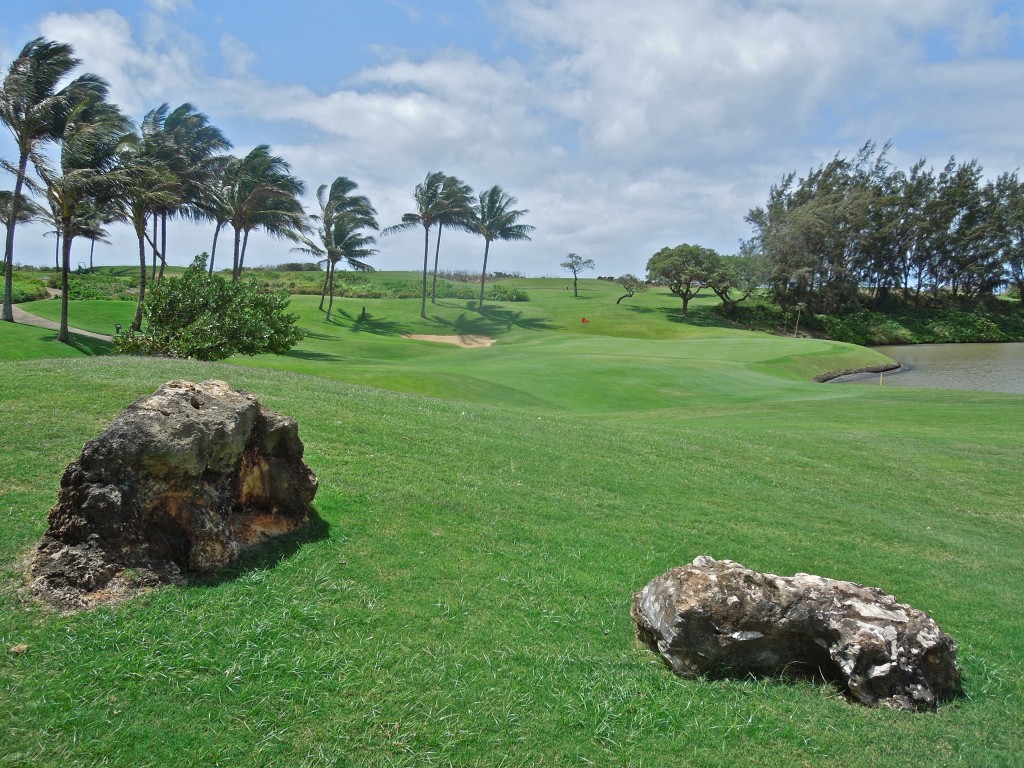 Like the rest of Poipu Bay, the par-three 11th appears easy enough provided you don’t miss the ball in the wrong place … and then there’s that invisible defense called the tradewinds!

If you have already heard of or seen pictures of Poipu Bay, you are not alone. The course has a much photographed stretch (holes15-17) that evokes comparisons to the iconic cliffs of Pebble Beach only these ones are higher. From 1994 through 2006, the layout also annually hosted the PGA Grand Slam for the winners of the four major men’s professional titles. 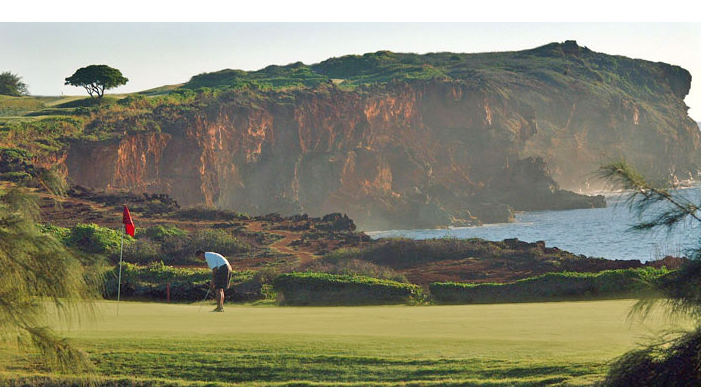 Looking back up from the 16th green toward the massive cliffs is a breathtaking sight!

If you remember, not only did Tiger Woods shoot a 10-under par 62 here, but Phil Mickelson fired an amazing 59 at Poipu Bay. Chances are, as you tackle the 7,123-yard challenge from the tips, you will discover how incredible those scores are for there is nothing easy about the test. (Reportedly, Phil only hit four fairways during that round, but the man can putt!) 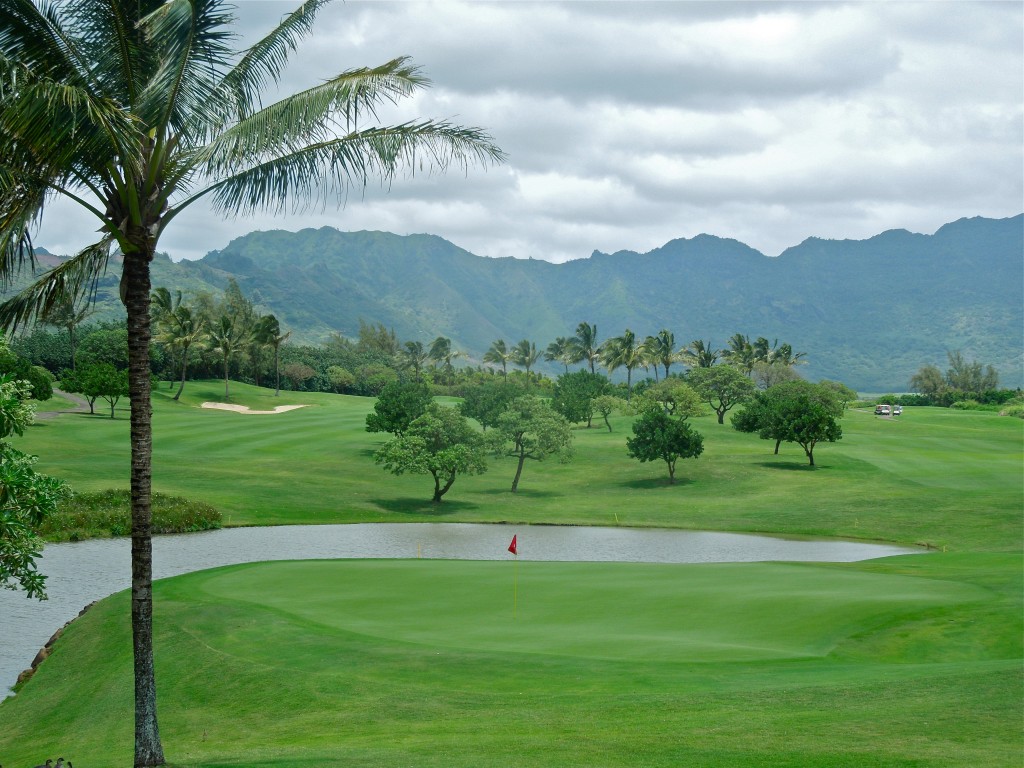 Looking back on the drive (or often less) and pitch par-four 13th – a playable, but potentially dangerous little hole.

My take on Poipu Bay is that it is an immaculate garden spot with a dash of Pebble Beach cliffside golf thrown in. The course closest in comparison would be on the north shore of Kauai – Princeville, which was also designed by Robert Trent Jones, Jr. Poipu features a different drier look with shorter trees and, of course, different backdrops. Like the other premier Kauai courses, Poipu Bay has undergone extensive improvement with seaside paspalum grass being the new grass of choice and the course now plays magnificently.

More than the other courses, Poipu Bay is exposed to the brisk tradewinds heading out of the east. Jones took this into account as he fashioned his shorter holes into the wind and longer ones downwind. He built many deep greens to provide stopping room to accommodate downwind approaches. The deception is that the course actually plays longer than its stated yardage. If there is an easier feature on the layout, it is that the par-fives are very docile. If you expect to score well here, you had better play them well. For me, the meat of the course and the best holes are the two-shotters. They are typically well-bunkered and those particularly situated in the middle of the course play considerable longer due to the brisk prevailing breezes.

Located left of the par-three 17th hole is an ancient sacred place of worship estimated to be about 500 years old.

It is no secret that you, like designer Jones, will revel in the two spectacular ocean holes at 15 and 16. Measuring 427 and 510 yards respectively, these two shotters are thrillingly picturesque – and tough! Also distracting are the world-class views from each of the tee boxes. While you may drive it a long way on 15, trying to get close with your approach given the false front and then securing a par is no automatic procedure. The 16th is one of the great two-shotters in the world and the longer you drive the ball, the tighter the landing area becomes. The putting surface is also boldly contoured making it not only tough to hit and hold, but a challenge to putt. Again playing downwind, the par-three, par-five finish makes for a scenic finish to a most pleasurable golf experience that is Poipu Bay!

Below is the attractive par-five finishing hole (from behind and right of the green) and a good opportunity to end with a birdie! 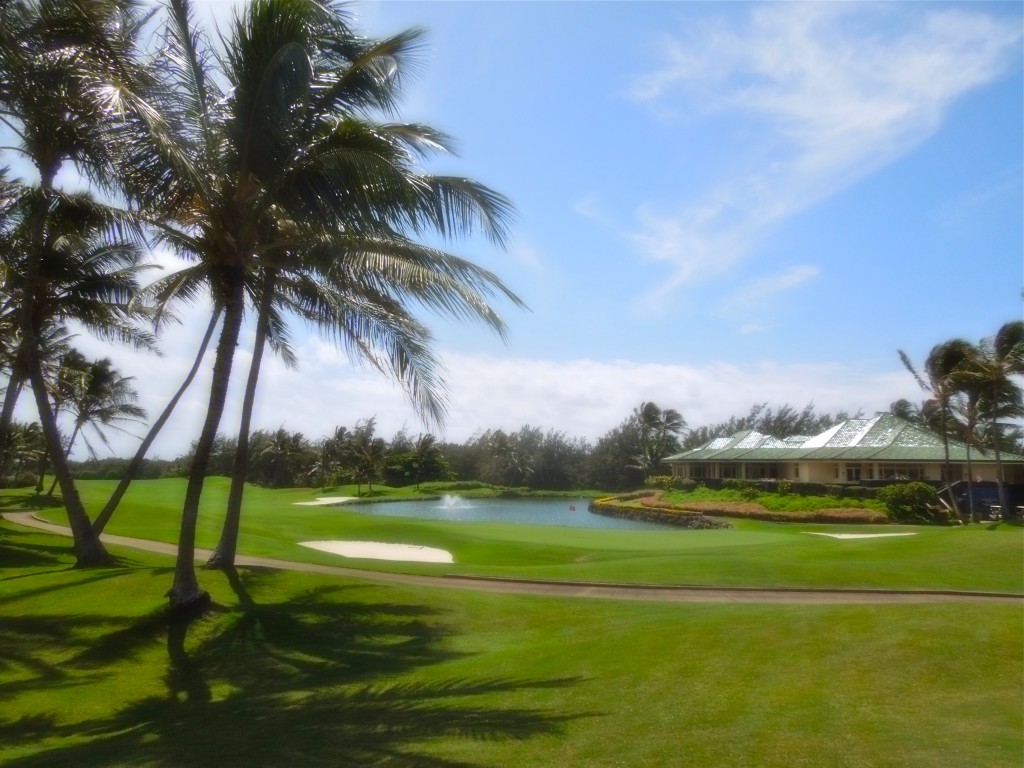