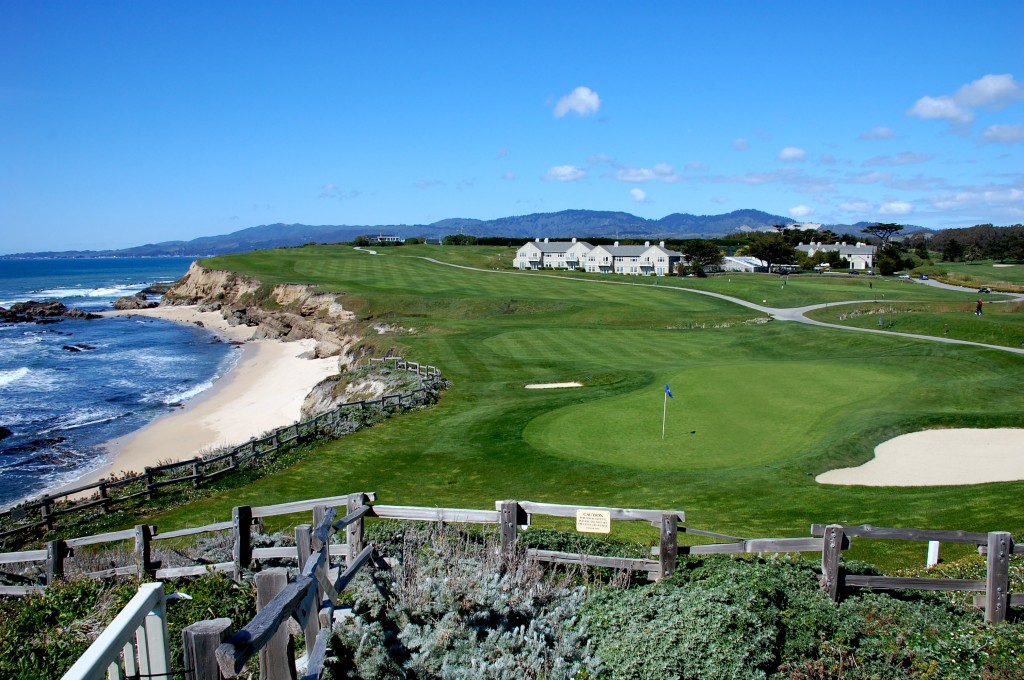 Looking back from behind the par-four 18th green toward the tee. This the left-side of this putting surface used to be situated out over the ocean before erosion forced it to be moved inland. It was a very scary approach shot!

Arnold Palmer, and more accurately his former architectural partner Frank Duane, designed precious few courses in Northern California, but the Old Course at Half Moon Bay is one you will likely enjoy and the only one done with Duane. Along with the well-acclaimed Hiddenbrooke Golf Club in Vallejo, the Old Course at Half Moon Bay is the other original Palmer-design. Built in 1973, the layout is the centerpiece of the upscale Ocean Colony real estate development that also now adjoins The Ritz-Carlton Hotel just south of the quaint town of Half Moon Bay. 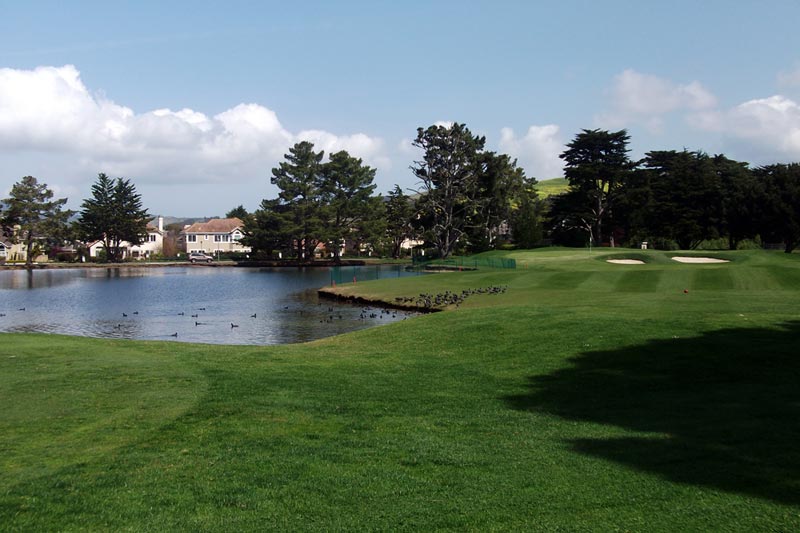 Early in your round on the Old Course, sand, trees, water, and houses form the backdrop for this traditional parkland variety layout. Shown above is the par-three 3rd.

Situated just west from the San Francisco International Airport, the town of Half Moon Bay seems eons away from its urban neighbors just north and east.  A vehement no-growth area, the locality has been the home to Costanoan Indians, Spanish explorers, and Canadian rumrunners during Prohibition. Today, it is known for it artichokes and pumpkins as well as the Mavericks surfing contest. And it just happens to be one of my favorite day-getaways.   As its name suggests, the Old Course is the older of the two layouts at Half Moon Bay. With 16 of the holes being a traditional parkland variety, it is distinctly very different from its sister course, the open links-style Ocean Course created by architect Arthur Hills. 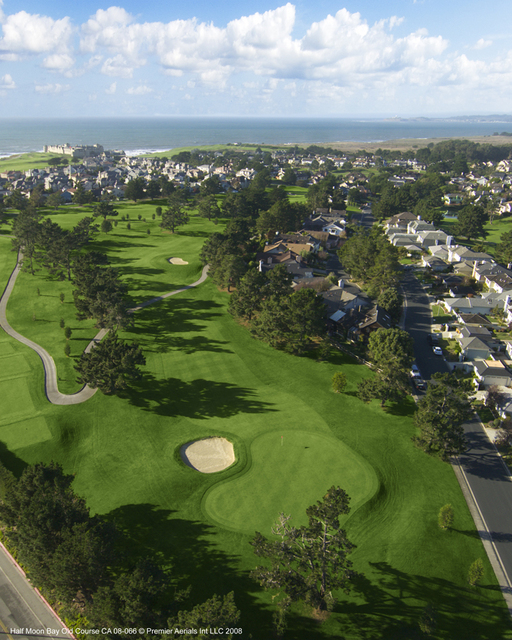 Bold bunkering and trees form the visible challenge at the Old Course as shown on the par-four 6th.

Both nines on the Old Course begin down near the ocean and head back into the wooded housing development. Though about half of the holes have homes on both sides of play, mature trees and reasonable setbacks cause the test never to become claustrophobic. There is also enough tumble to the terrain to make the layout interesting, but it is the sand bunkering and large trees that dominate the look and play of the course. With a yardage of 7,001 from the tips and a 75.2/135 rating/slope, you can appreciate that the layout has enough challenge. 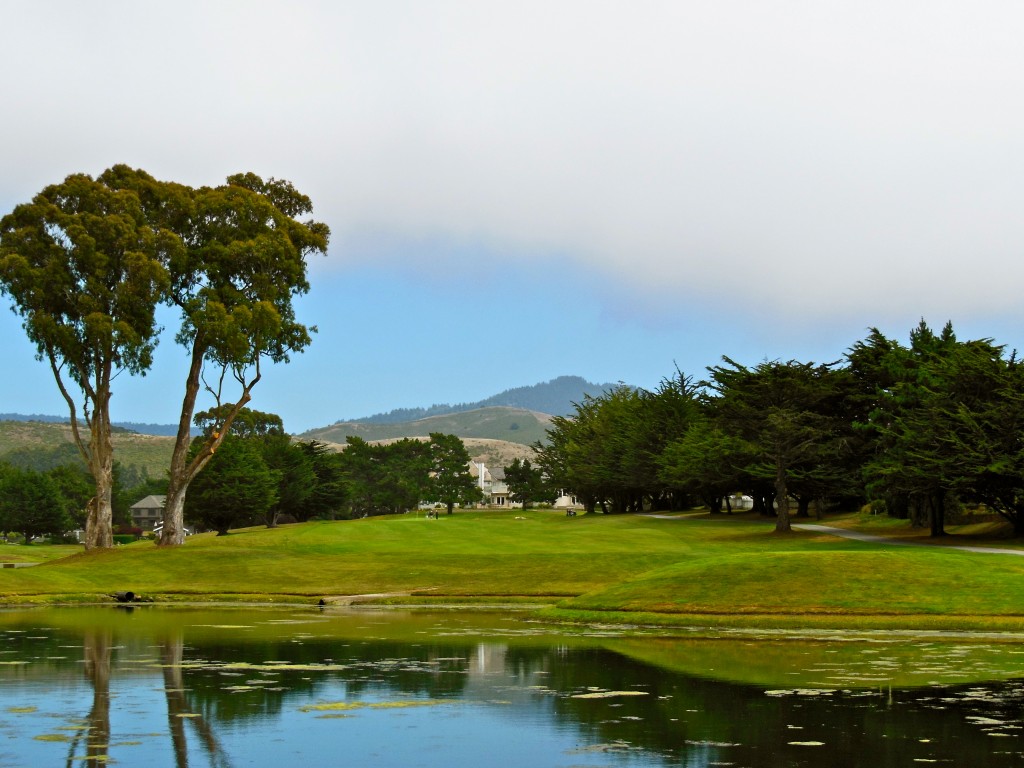 The putting surfaces are generous in size and there are no routinely straight putts though there are no readily exaggerated slopes either. Suffice it to say that you may experience some long and challenging putts. Likewise the fairway corridors are generous enough to be more than reasonable for resort play, though there is sufficient trouble in the way of out-of-bounds and trees should one stray. The course usually plays relatively firm and fast despite the cool fog and wind that often dominates the environment. While there are several water hazards and a couple of forced carries, most are easily avoided with reasonable play.   Big hitters can reach the par-five in two exceptional shots, but most will not. Likewise, most players will be hitting drivers on the majority of holes, which is fun. 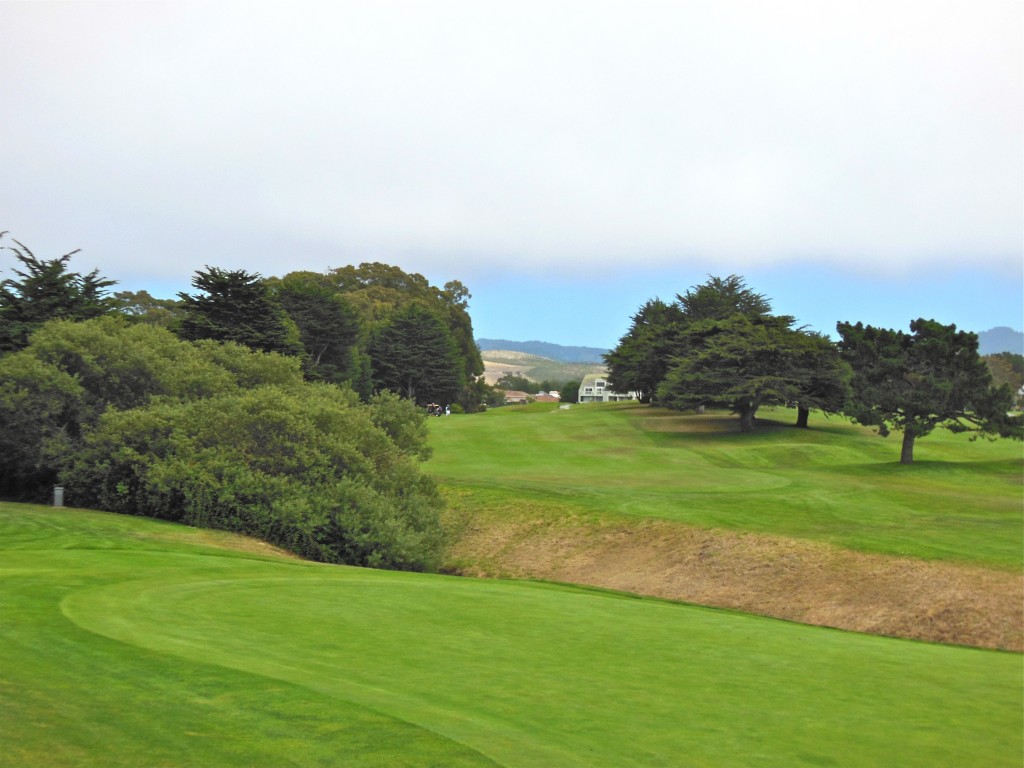 The downhill par-four 16th heading back into the breeze toward the ocean will typically be your toughest challenge in the closing four-hole stretch. Here it is pictured from behind the green looking past the barranca and back up the fairway.

“Consistent and solid” defines the Old Course, and the finish is quite memorable. Starting with the par-five 15th you head back toward the ocean often into the wind. Water guards the entire left side of the hole though the fairway is more than ample.  For my money, the downhill 410-yard par-four 16th is the best hole – relatively narrow, but usually also into the breeze. The key feature is a shallow canted green that sits just beyond a deep barranca. You have to bring all your game to succeed here for the sloped green makes no putts automatic.   As you climb to the par-three 17th, you get your long awaited glimpse of the Pacific. A wide-open exposed hole, if there is any wind, you will certainly experience it here. The green is well-bunkered, but generous in size – provided you hit it straight and solid, and are not distracted enjoying the views.

The dramatic cliff view from the 18th tee is quietly one of the best in American golf. This hole was often been used in television commercials well before the stately Ritz-Carlton Hotel graced the property just a few yards off the 18th green. The other interesting fact is that the putting surface had to transferred well inland from the ocean due to continuing erosion.  Part of it once resided well out over the present cliffs where there are only birds flying now. Anyway, this iconic image will no doubt burn an indelible image in your mind as you recall the very solid Old Course at Half Moon Bay. 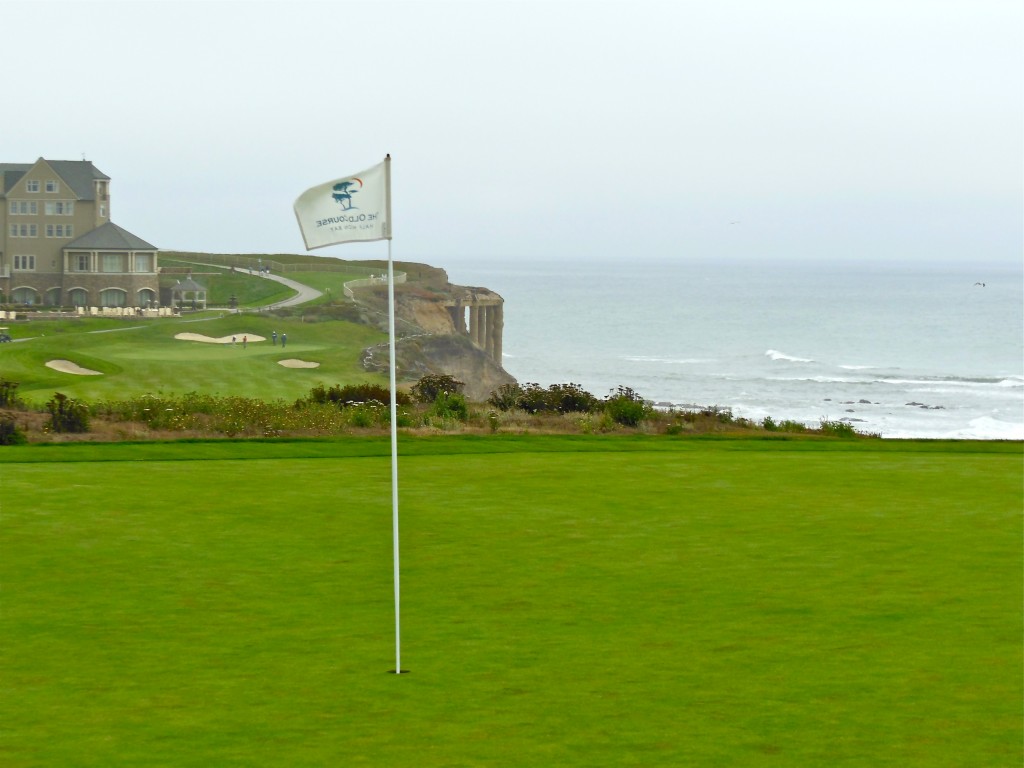 The par-three 17th green is pictured with the 18th and the ocean directly behind it. They all combine for quite a climax to a round of golf! 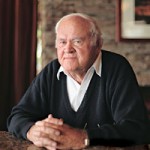 After your round, another round (of libations) or a hearty meal is recommended at Mullins Pub adjacent to the golf shop. Named for the late colorful Moon Mullins, Mullins was my friend and one to countless others as well. He was a long-time club professional who was an ambassador of sorts for the course. He had also spent many years on the PGA Tour and this was his favorite spot to spin many a yarn. Doubtless too, your round at either course here will furnish you a few of your own to tell.

The golf course, the real estate development, and the hotel complex are all separate entities, but cooperate with one another making the Ocean Colony or Ritz Carlton sublime places to respectively live or stay to play golf in California. This traditional golf course and adjoining Half Moon Bay community are convenient to the San Francisco International Airport, yet provide a uniquely different and naturally peaceful atmosphere – one I heartily recommend. 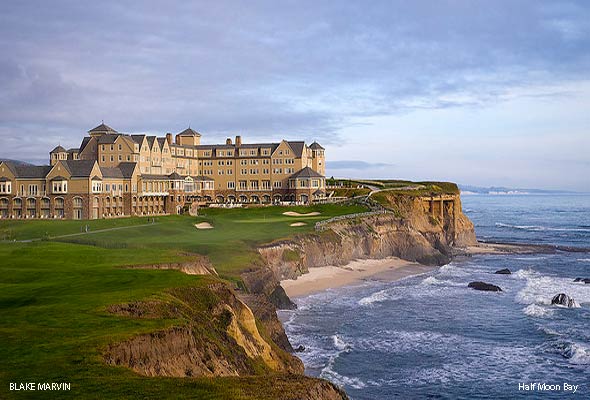 The Ritz-Carlton Hotel along with the adjacent 18th hole on the Old Course at Half Moon Bay has become one of American golf’s more fascinating iconic images.

P.S. The house just north behind the 18th tee 9 (or right of the 17th green on the other side of the hedge) was reportedly the western-most situated private home in the continental United States. It is now owned by the Ritz Carlton.

Below is a high aerial view of the 36-hole Half Moon Bay Golf Courses, the Ocean Colony development, and the Ritz-Carlton Hotel. 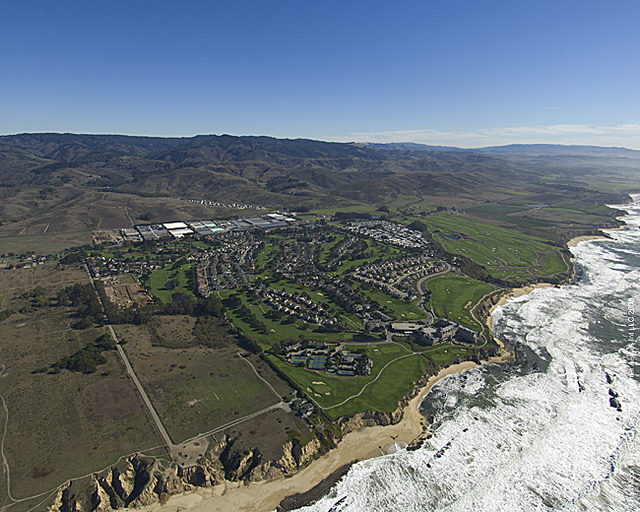