Deane Beman today seems an overlooked and forgotten man, but the PGA TOUR and its players owe much to this golf visionary who came from the playing ranks to transform the PGA TOUR into the 800-lb. gorilla it is today.  While the rest of American golf has suffered for more than decade of decline in play and spending, the TOUR and it’s players continue to play as if the economy was healthy.  Some may say it’s because of Tiger Woods, but it all really goes back further than that to Deane Beman.

I suspect that not many of today’s players or golfers really understand or appreciate the genius of Deane Beman.  A short man of average build and strength, Beman was a remarkably talented player, but it is his leadership as Commissioner of the PGA TOUR that really brought him to the forefront and made him one of the most important figures in American golf.  Today’s touring professionals can thank two players, namely Arnold Palmer and Tiger Woods for putting many more dollars in their pockets and elevating their lifestyles into the realm of the rich, but they can also thank Deane Beman, Commission of the PGA TOUR from 1974-1994.

Beman, from the University of Maryland, was a college contemporary of Jack Nicklaus.  He first gathered international notice when, together with his stellar victorious Walker Cup teammates in the field, he beat them all to capture the 1959 British Amateur at Royal St. George’s.  Twice winning the United States Amateur, being a member of four Walker Cup teams, and four professional titles would later validate his victory.  Meticulous in method, confident and competitive by nature, he employed outstanding hand and eye dexterity to hit his fairway woods as accurately as others could hit mid-irons.  He was one of the early players who charted courses for yardages and shared the practice with Nicklaus who popularized it to later become commonplace.

Beman always was ahead of his time and together with a Washington, D.C. golf course architect, Ed Ault, initiated the conceptual idea of the TPC or stadium golf courses.  It may surprise you to learn that this occurred in the early 1960s, well before the advent of the PGA Tour.  Beman approached the United States Golf Association about the idea to build championship layouts specially designed for spectators and to rotate their championships among them.  Well, it took merely a minute and a half for the USGA to dismiss the idea, but Beman filed it away.

Upon becoming Commissioner of the PGA TOUR that had only five years earlier broken away from the PGA of America, Beman was faced with the challenging task of negotiating a television contract with a noticeable lack of prestige events outside of the four majors.  He needed to improve the new Players Championship, and then added The TOUR Championship, transformed the World Series of Golf from a four-player exhibition into an international event.  Arnold Palmer and Jack Nicklaus also wanted to host their own events so the Bay Hill Invitational and The Memorial were born and added to the mix.  In just a couple of years, five new prestigious events graced the calendar and would soon fetch far more lucrative television contracts for the PGA TOUR. 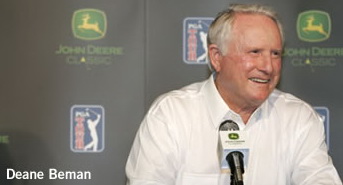 Beman then resurrected his idea of “stadium golf” duplicating the concept from the Stadium Course – TPC Sawgrass all around the country.  The story of Sawgrass is noteworthy.  Beman envisioned a special premier event for the PGA Tour and while the nearby Sawgrass Country Club was a very challenging golf course, it was simply not in a position to be a premier venue. The PGA TOUR at the time had little money and no desire to spend much to acquire or build a golf course.  Just inland from the Sawgrass Country Club in Ponte Vedra Beach near Jacksonville, Florida was some available swampland.  A developer needed amenities nearby to sell his properties and he sold the 415-acre parcel to the Tour for $1 who used it to obtain a non-recourse loan.  Beman then solicited fifty local businessmen to put up $20,000 apiece to help finance construction.  Beman brought in his old friend from amateur golf days, Pete Dye, to design the golf course.  For six months, all efforts were focused on building an 18,000 lineal foot canal around the perimeter simply to drain the property.  Once finished, it took another 18 months to build the course.  The result was diabolical and the pros were upset with the severity of some of the challenges.  Modifications were made and the course evolved into one of the country’s best layouts, especially ones open for public play.  In the last year, the original pyramid-shaped clubhouse was razed and replaced with a palatial 77,000 square foot one, and the golf course infrastructure was modernized with state-of-the-art subterranean irrigation and drainage systems.  Bunkers were deepened as well. 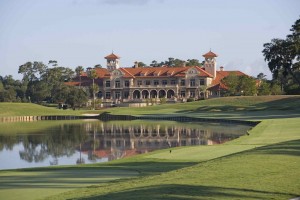 TPC Sawgrass - the 18th Hole and Clubhouse Beyond.

One sideline is the story behind the famous island green par-three seventeenth.  As is customary in Florida, architects will typically dig sand for use in mounding and course features and then the vacant pits become lakes and water hazards.  It is a practice known as “cut and fill.”  The area adjoining the sixteenth hole was simply that.  Dye had dug a huge pit to service fill for the rest of the course and had little idea as to how he was going to finish the 17th hole.  It was his wife, Alice, an outstanding player and de facto golf course designer who suggested that he leave the pit as a lake and simply put in an island green in the middle of it.  This was hardly the first such island green, but other ones usually had bail-out or grassy areas to accommodate shots missing the putting surface.  That was Pete’s choice.  With time, Alice prevailed with this all-or-nothing island green that has since been often copied both by the Dyes and others.  So there you have the rest of the story. 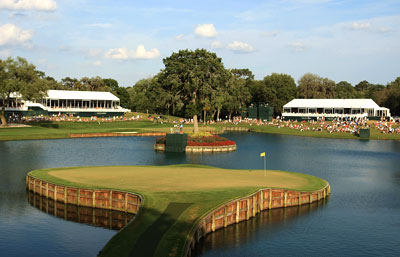 Back to Deane Beman, I had the pleasure of lunching with him twice and found him to easily be one of the most astute leaders in the golf industry, if not beyond.  However politically adroit, he did not suffer fools easily, and is quick on his feet and always prepared.  It has been my experience in meeting “captains of industry” or “leaders” that often “the job makes the man.”  In Beman’s case with the PGA Tour, there is no doubt for me that “the man made the job.”  Suffice it to say, Beman’s concepts and careful execution created a golfing empire and a money flow that continues today.

Beman’s contributions also extended to adding both the Champions Tour.  Two tournaments and a total purse of $250,000 evolved into a schedule of 45 events with prize money in excess of $54 million. “When we started, the players didn’t want to play more than 10 tournaments a year. They wanted to play a little bit to get out of the house. Then, when they started playing, they found out how much they missed it-the competition, the camaraderie. They said, ‘Let’s play more,’ and here we are,” Beman said.

In 1989 Beman then created the Ben Hogan Tour (now the Nationwide Tour) which has served as an extremely successful proving ground for young professionals that also took the sport into 30 additional markets and created a launching pad for the careers of John Daly, Tom Lehman, David Duval, Jim Furyk, and Zack Johnson just to name a few..

In May of 1998, another of Beman’s ideas became reality when the World Golf Village, home of the World Golf Hall of Fame, opened. Beman had the idea of constructing a PGA TOUR Hall of Fame somewhere in Northeast Florida, near tour headquarters in Ponte Vedra and near Interstate 95. However, the concept grew in scope as golf organizations, such as the LPGA and others around the world, learned of the project and asked to participate. “It was too big for just the PGA TOUR,” said Beman. “We had to ask the rest of the world to join us.”

One of golf’s most interesting secrets is the amount of money the PGA TOUR contributes to their member’s pension program.  Average players who successfully compete for twenty years or so and often make the cuts at events will retire with multiples of tens of millions of dollars in their pensions!  That does not include their winnings or endorsements.  Tom Kite once relayed that a player the likes of Justin Leonard, a steady performer, but hardly a superstar, might retire with more than forty to fifty million dollars in his pension account.  Properly invested, even his great-grandchildren will never have a financial worry.  Beyond appreciating that Leonard was a talented professional golfer, they can thank the vision of Deane Beman.

In 1994, Beman retired as commissioner.  As TOUR Player and former TOUR Policy Board member, Peter Jacobsen said, “Deane built a Mercedes; all Tim (Finchem) has to do is keep his foot on the gas.”   Whether innovating or executing, Beman really changed the face of American professional golf.  In 2000, Beman was elected into the World Golf Hall of Fame for “Lifetime Achievement.” 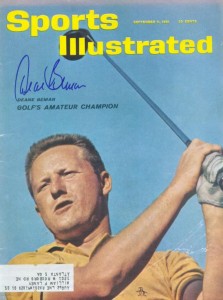