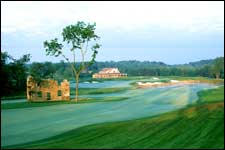 I am an owner in the sandwich category. “My” course, Whiskey Creek in Ijamsville, Maryland, opened in 2000, the year when golf courses were opening at the rate of one per day.  This was the height of the boom, before the word “boom” was replaced with “bubble.”  I wish that I could take pleasure in knowing that I was part of a collective frenzy that already has the stature of an historic aberration, but I can’t, not when I look at the balance sheets.   The punch line on golf, as a clever friend once remarked, is great game, lousy business.

But I have no buyer’s remorse.  The experience — unlike the investment — has paid marvelous dividends, and continues to do so.  The amount that I put into Whiskey Creek is about what I would have paid to join a good club, but I didn’t just write a check   My friend, Sam Dunn, and I launched the undertaking with the idea that we’d do the moving and shaking  and maybe even some of the designing and eventually build ourselves a lodge on the highest point of the property from which we could survey our domain.

Didn’t turn out that way, of course.  Our own private bubble burst pretty quickly as it began to dawn on us that the days of the mom-and-pop course were over (they never really existed at all, though there are a few exceptions that prove the rule).  To build a competitive golf course at the edge of a big metropolitan area, we needed more strength at the bank than either of us had.  So we went a-courting, looking for a well-endowed partner (yes, bad pun, but unavoidable).  And by this point we realized that we needed more than money; we needed someone with the know-how to get the course built and then to run the place.  In short, we needed a management company.

There’s no need to tell the stories of how we were spurned.  We made it all the way the altar with one honcho, a charismatic guy who announced at diinner, “We’re married now and we’re having this baby!”  He changed his mind when he figured out that we had expensive tastes — specifically, that we were going to need a mile-long road to get from the highway back to the property we’d found.  But some rejections really are blessings in disguise, for we ended up in partnership with KemperSports. The terms were clear and correct — Kemper wanted a majority position.  They wanted control.  It felt as though we were handing over our dream, but it didn’t take long to realize that some of the tasks of developing a course – not just managing the construction but dealing with various agencies, vendors, bankers, and all the other types who have a role to play – are best handled by an outfit with depth and experience.

The people from KemperSports were as committed as we were, and far more alert to the pitfalls.  In retrospect, it seems remarkable that they listened to us at all.  They selected the architect, but in a few key matters they let us have our say.

From the outset, we’d been determined to keep the clubhouse in the center of the property, avoiding the cliche of siting it on the highest point of ground. How many times have you played a round where the 9th and the 18th are weary slogs up the hill?   Our idea was to have the two finishing holes play downhill so that you could roll down to the clubhouse like a horse going to the barn.

And we won a skirmish with Kemper about how close the golf could be to the clubhouse.  We wanted it no more than steps away, so that the loungers on the porch provided a gallery for players on the finishing hole.  Even those inside the clubhouse, we argued, should never lose sight of the fact that they were at a golf course.  But Kemper had legal anxieties.  They didn’t want anyone to get beaned with an errant shot while quaffing a Rob Roy on the porch.

But they saw the light, and the Whiskey Creek clubhouse sits in a glorious little bowl, a kind of amphitheatre, and the porch has a fine view of the 18th hole as it sweeps down past the ruins of an old stone farmhouse.   The stone house represents a small victory, too.   One of the golf architects Sam and I had asked to do a routing  (this was pre-Kemper) wanted to tear the thing down.  Terrible hazard, he said.  Dangerous, artificial, right where a good drive should finish, and so forth and so on.  But the architects who ended up designing the course — Mike Poellet and Brian Costello, with Ernie Els on board as a consultant — loved the old house and left it standing, where it has everything to do with the strategy of the hole.  Many level-headed people think this is one of the best finishing holes in the mid-Atlantic, and it’s certainly one of the most memorable.

So I feel a glow of satisfaction every time I come up the steps to the clubhouse, walking under the bag shelter (where I helped set the upright beams because the carpenter was short-handed that day) and through a screen of white pines.  Sam gets the credit for way the clubhouse is hidden from the parking lot.  He’s a building architect, and he designed not only the site but the clubhouse itself, a shingled building that has the look and feel of a lodge.  With a lot of exposed wood inside, and leather chairs parked in front of a big stone fireplace, the clubhouse is basically a single open room, comfy and inviting.

There are a few artifacts around — old barrels and kegs, some souvenir whiskey bottles — that are meant to serve as reminders of the once-thriving whiskey business in this part of Maryland.  I dug up most of this stuff in local antique shops, and that striking mount of a wild turkey in flight that hangs over the fireplace?  I didn’t shoot it but we have a flock of wild turkeys that likes to roost in the pines along the creek, and it seemed that if we were going to try to keep the decor local and authentic, a mounted turkey was to be preferred to yet another print of Old Tom Morris.  Anyway, I spent weeks calling taxidermists all over the country, and finally found a bird with a powerful, aerodynamic quality.

I’m biased, obviously, but I think that the Whiskey Creek clubhouse is one of the best perches in golf.   It’s my favorite perch, in any case, and the feeling that I played a tiny part in creating it  reinforces my preference.  Sam had far more to do with the way the clubhouse looks, and he’s justifiably proud of his design; he has an eight-foot, black-and-white blow-up of the clubhouse, seen from the 18th fairway, with a stone-rimmed pond in the foreground.

I can’t speak for Sam, but for me Whiskey Creek turned out better than anything I had envisioned.    The course is a beauty, but it’s the clubhouse that sets the tone of the place.   Whiskey Creek is a daily fee course, but the setting is peaceful, isolated, and removed, and the clubhouse plunks you down right in the middle of it.   It says, You’re here now.  You’re in a special place.  Forget everything else and enjoy the game.

To say the truth, I am a little awed when I stand on the porch or practice green and look around.   To my eyes, it’s exactly what a golf course ought to look like.  And I can’t entirely forget how the place used to look, when most of the  land was one big field of poison ivy.  It took a lot of work, a long time, and a lot of faith to transform it.   We did this, I think, and we did, even if I am just a tiny fraction of that “we,” even if the business hasn’t made anyone rich.  I would have paid to be a part of this.

Come to think of it, I did.

You don’t have to take my word that Whiskey Creek provides exceptional golf.  Here’s a link to some local reviews.  The few harsh reviews date back a few years, when we lost a couple of greens.  Note, though, that some reviewers have compliments for the way the situation was handled.  Our greens now are satiny smooth.