“This is déjà vu all over again,” said Yogi Berra, giving the fancy French term a good old American body slam.  Yogi was describing his reaction to seeing back-to-back home runs by Mantle and Maris, and what he meant was, Hey!  I’ve seen that before!

Hats off to Yogi the Phrase-meister,  but he got it ass-backwards, and every now and then the original, actual meaning of deja vu can be worth remembering.   The French words translate literally as “already seen,” and the term déjà vu originally meant the exact opposite of what it meant in Yogi-speak.   It didn’t refer to something that had become familiar through repetition, but to something new — a new sight, a new person – that seemed wierdly, powerfully familiar.  People who fall in love often have a sense of déjà vu, a feeling of having known the other for year.  There’s a strong jolt of recognition, heightened by a sense of the strange or uncanny, a sensation of encountering something that has been previously dreamed or imagined.  It can feel like having a pair of jumper cables hooked directly to your cerebral cortex. 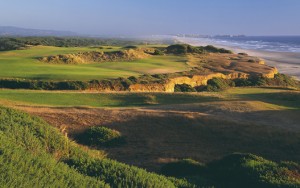 It happens to lovers, and it can happen to golfers.  On a recent trip back to Bandon Dunes, I was reminded of how the place can overwhelm a first time visitor.  I happened to play nine holes – the back nine at Bandon Dunes – with someone who was seeing the course for the first time.  He was a professor from Connecticut, a golfer familiar with plenty of East Coast shrines, a man whose well-honed analytic faculties were short-circuited as we played out toward the bluffs on the Pacific Ocean.   It was a sparkling day when everything seemed to be in perfect focus and high definition, and he couldn’t stop saying, “My God!  This is just so beautiful.  It’s astonishing!  Incredible!  It can’t go on like this!”

But  it does go on.  The 12th hole at Bandon Dunes gives you a first look at the Pacific, and then you turn inland for two holes before returning, at the 15th, to the edge of the headlands above the Pacific.  The ocean was ridiculously beautiful that day, a deep blue with lines of crisp, white surf.  It had come out that I was the writer of “Dream Golf,” and the professor worked that into his commentary.  “It is like a dream,” he said, “a dream I’d forgotten but please – don’t wake me up.  My God, I can’t believe this place exists!  It’s a amazing!”

And so on.  I thought he was going to faint when we reached the 16th, when nature piled on a few special effects.   Wispy clouds raced overhead and the cloud-shadows flickered across the brawling, divided fairway.  Way off in the distance, on the highest point of land, we could see the flag against the horizon, and I could feel the hair on the back of my neck standing up.   I can’t claim that I was experiencing a moment of déjà vu, since I’ve been to Bandon Dunes many times and this wasn’t a new sight for me, but that hole remains a kind of vision.  As often as I’ve played it, I still have the electric secnsation that I must have imagined this hole long before I laid eyes on it.

Well, that’s the déjà vu effect, and I think it’s what sets Bandon Dunes apart and makes so many visitors feel a personal connection to the place.  For me, anyway, its a completely been a completely difrerent experience to play golf at Bandon Dunes than to play at Pinehurst, say,  or Winged Foot.  Great courses, but they don’t light up my psyche.  The thing about Bandon Dunes is not just that it’s beautiful but it seems as though some place just like it had been sitting there in my subconscious for my whole golfing life.

I’ve gone on about the 16th hole at Bandon Dunes, but  for me, the shock of recognition isstrongest on the 15th tee of Old Macdonald, a high point where the whole Bandon panorama opens up and, for once, I can wholeheartedly agree with a slogan.  This is golf as it was meant to be. 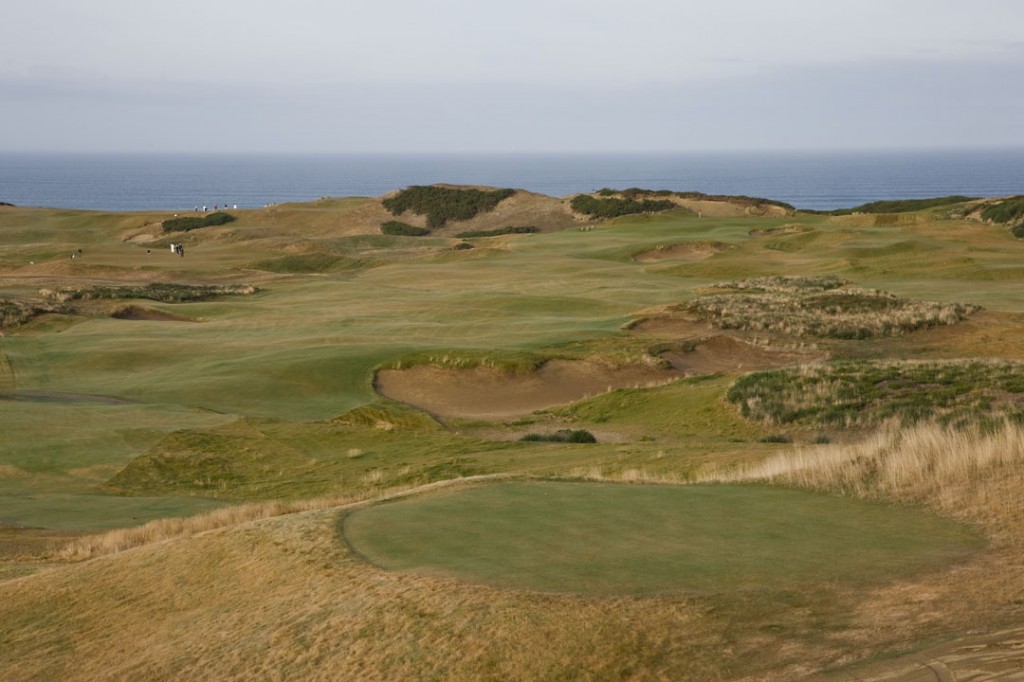