“The course should have beautiful surroundings, and all the artificial features should have so natural appearance that a stranger is unable to distinguish them from nature itself.”
—Alister MacKenzie

On the cusp of Masters week, it’s appropriate to savor the genius of Alister MacKenzie, the Scottish architect of Augusta National. With the collaboration of Bobby Jones, he designed a masterpiece for the ages with its beguiling contours and green surfaces that still confound the world’s best players. But MacKenzie was not a “one course” wonder. His design signature graces some of the finest courses in the world, including Royal Melbourne, Lahinch, Cypress Point, Pasatiempo and two revered courses in Michigan: Crystal Downs in Frankfort and the University of Michigan GC in Ann Arbor. Considering only 16 courses in the U.S. were designed by MacKenzie, having two of his designs in Michigan is impressive.

As I learned to my surprise at the PGA Merchandise Show in Orlando earlier this year, MacKenzie’s iconic name and design stature are being tastefully branded by an apparel company headquartered in South Carolina. The Alister MacKenzie Apparel Company (www.alistermackenzie.com) offers a classy collection of both on-course golf wear and clubhouse apparel. At the PGA Show, its well-appointed booth was highlighted by a wide array of fashionable yet understated pieces that neatly synched with the MacKenzie design style: classic, unadorned, subtle and with an emphasis on natural fabrics. Along with a framed illustration of the Scottish architect in his tartan plaid kilts, what caught my eye was the company’s sharply designed logo: MacKenzie’s signature superimposed over a leaning Monterey Cypress tree. Very clever and spot-on. The tree image conjured up the famed Lone Cypress on 17 Mile Drive between Cypress Point and Pebble Beach. 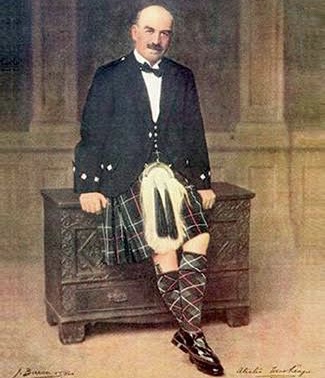 As good as the logo is, the company maintains an understated design mindset by not lavishly applying it to its lines. Instead, the logo is predominantly found only as a label and not splashed on the chest or sleeve. Obviously, the company’s signature is stepping “aside” to make appropriate room for a club’s or a resort’s logo. 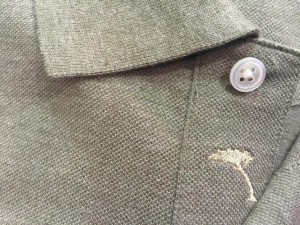 However, on several pieces the leaning cypress logo (minus the signature) is visible yet unintrusive. On its all-cotton and performance line (with added wicking properties) of golf shirts, the cypress tree logo is embroidered on the placket. If the shirt were buttoned up like Bubba Watson, the logo wouldn’t be seen at all. 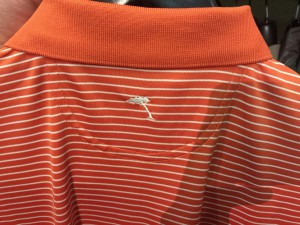 On its Action Wear Collection and outer wear, the cypress tree embroidery is on the center back just below the collar. Again, nothing flashy or ostentatious, just as the good Doctor would prescribe for one of his designs. Of special note is a handsome stone-colored sleeveless nylon vest with a zippered front and zippered pockets. Its quality construction is evident in terms of the lining, the shell and the zippers. And the cypress tree adorns the center back of the piece.

On the people side of the biz, the company’s principals are successful and experienced leaders in the golf apparel sector. Ray Giurico and Bert Hand each spent decades at Hart Schaffer and Marx where they managed the Jack Nicklaus and Bobby Jones (Alister would have appreciated this collaboration) golf apparel lines.

Oddly enough, this line is not currently available at Augusta National and the Masters although it would seem to be a perfect fit there. And the company is just starting to call on clients in Michigan including Crystal Downs and the University of Michigan. As a humble suggestion to Mr. Giurico and Mr. Hand, tell them Mr. MacKenzie sent you.