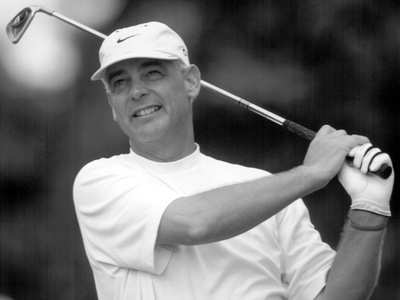 Although Pontiac native Tom Gillis came close last year when he lost in a playoff to Jordan Spieth at the John Deere Classic, Marshall’s John Morse remains the last Michigan pro to have qualified for and played in the Masters. A Michigan Golf Hall of Famer, Morse played in both the 1995 and 1997 Masters. In ’95, Morse won the Hawaiian Open thus earning an automatic invitation to the Masters while in ’97 he made a return trip to Augusta thanks to his fourth place finish at the ‘96 U.S. Open at Oakland Hills CC. The former Big Ten champion at the University of Michigan and the 1990 Australian Open titleist, Morse is now retired from the PGA Tour after competing on its Champions Tour for several years. Recently, he spoke with Terry Moore about his Masters experiences and recollections.

When leading the Hawaiian Open during the final round did your mind ever wander and think about the Masters?

Luckily, I stayed in the moment. I made a nice up and down on 15 which helped me stay focused. With only a one shot lead, I was definitely nervous on the 18th tee. But I hit a pretty good drive which left me with a good lie for a downwind second shot to the par-five. Avoiding the bunkers near the green, I hit it straight and the ball rolled up to within six feet of the cup. So right then I knew I could handle it. I made the putt for eagle and won by three shots. But as soon as I holed my final putt, I knew what it meant. Qualifying for the Masters was an immediate thought.

Talk about that first official invitation to the Masters. When did you receive it?

I believe it came in the mail in February because I had enough time to organize my itinerary for Augusta. I still have that invitation as I do the one in 1997. Although I could play practice rounds there as soon as I qualified, I didn’t play Augusta National until I arrived for the tournament in April. There wasn’t enough time to break away from the Tour calendar.

What are your recollections about arriving in Augusta for the tournament?

At the time we were wintering in Orlando and a friend of mine arranged to fly us up to Augusta in his company plane. We flew into Augusta on Sunday and landed at the airport where we were greeted on the tarmac by Augusta National’s van. We were driven up Magnolia Lane and then I registered inside the clubhouse around 1:30 pm on a beautiful sunny day. It was thrilling. I didn’t play the course that day as we tended to details like picking up a courtesy car and checking into the house we rented for the week.

And your practice rounds?

I played with Ian Baker-Finch, Wayne Grady and Frank Nobilo, all friends from the Australasian Tour where we all competed. Before the tournament, we talked about a practice round and then it was just a matter of one of us putting our names on the starting sheet. Thinking back, I probably overplayed the course that week; I played on Monday, Tuesday and Wednesday and also played in the Par-3 on Wednesday afternoon. You have to be careful about your preparation because the course is a difficult walk and can wear you out.

What were your first impressions of Augusta National?

Like many first timers, I was amazed by how undulating it is. I walked out of the clubhouse and headed toward the first tee and then I saw how the golf course was spread out below the 9th and 18th greens. I felt I could see the entire course as it worked itself around the property. It’s phenomenal.

What’s your memory of that first drive on Thursday?

As I recall, I hit a solid drive up the left side of the fairway and at the top of the hill. Of course, that was before the course was dramatically lengthened and where the first hole is now considerably longer. In ’95, it was only 260 yards to the top of the hill; now it’s 300 yards.

You had a pair of 74s—respectable rounds—but you missed the cut by three shots. How did you play that week and what were the key holes?

I played alright that week but I didn’t make enough putts. On the par-three 16th hole one day, I had a four-putt which really hurt. I hit the green in regulation and walked off with a double. But that’s the nature of Augusta and its greens; you get in the wrong spot and bad things happen.

How did you and your caddie prepare for the greens?

Well, we did our homework by asking other players and caddies about them but there’s no substitute for experience. When I played in the Masters, it was before players had access to the mapping books about the greens. Nowadays, players have detailed yardage books which include every green being mapped out in terms of its slope and break lines. They’re a tremendous help. These books have been around the last 10-15 years. I believe it was Fred Funk’s caddie who first came up with the idea and produced them.

After you missed the cut, did you stay in Augusta or head out of town?

No, I stayed until Sunday. We had the house rented for the full week and the Masters allows you to take the courtesy car to the next Tour stop which was the Heritage Classic in nearby Hilton Head, SC. On Saturday afternoon, I practiced at Augusta National which was commonly done by players missing the cut. Essentially, I just decompressed from the tournament and relaxed with my family. We left for Hilton Head on Sunday afternoon but I recall later watching Ben Crenshaw play the last few holes and win the Masters.

The first round weather was tough and the scores were generally high that day. But I probably made a tactical error in the second round where I went for the 15th green in two. At the time, I thought I needed to make a birdie to make the cut. In hindsight, I should have laid up because that was more my style at the time. But thinking about the cut, I forced it. I did manage a bogie there but finished with three pars for a 73.

What can you tell the average golfer about playing in the Masters? What are its playability factors?

Two-fold: how severe the greens are and how precise the approach shots must be. You learn to be precise by often taking alternate routes to certain hole positions. The straightest line is not the best line. The second hole is a great example. When that pin is on the far right of the green, players aim for the middle or the far left side of the green and just let the approach shot fall down toward that pin. No one tries to fly it toward that pin because you’re risking trouble. It comes down to the severity of a poorly placed shot.

Another example is the first hole. It’s one of the toughest greens on the course and most people don’t even know it. It’s very difficult. We’ve talked about how Charl Schwartzel won his Masters (2011) by starting off his final round by chipping in— from way off the right side of the green— for an unbelievable birdie. He easily could have made double there due to the pin position. And the greens at 3, 4 and 5 are equally treacherous. There’s no let up.