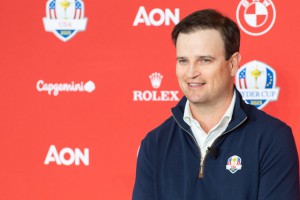 On Monday, Zach Johnson, 46, was named the Captain of the U.S. Ryder Cup team that will play their European counterparts on September 25-October 1, 2023, at Marco Simone Golf & Country Club in Rome, Italy.

Johnson was impressive in his remarks on several levels. First, he showed how deeply he cares about the Ryder Cup and was humbled by being named a Captain. When noted golf writer and author Michael Bamberger, in his press conference question, recited the names of Sam Snead, Arnold Palmer, Jack Nicklaus and Tom Watson as the only Captains prior to Johnson to have won a Masters and Open (British) Championship, Johnson was visibly moved.

Secondly, he attributed his success to others—“I’m a product of great people,” he said. He credited the upbringing by his parents, friends, family members and teachers, including PGA pros Larry Gladson and Mike Bender, who started his career in Iowa. Although he now lives in Sea Island, GA, and is the next door neighbor of two-time Captain Davis Love III, Johnson is a proud native of Cedar Rapids, Iowa.

Johnson was also careful and politically adept, probably due to savvy anticipation by the PGA of America, at avoiding any discussion of Phil Mickelson being named an Assistant Captain as he was last time under Steve Stricker. Mickelson has recently apologized for his supportive statements about the Saudis funding a proposed rival league to the PGA Tour. He also was highly critical of the PGA Tour and its commissioner which prompted a strong backlash from his fellow Tour players.

“Given basically where we are right now, I have no idea what lies ahead as far as my vice captains and who is on this team,” Johnson said. Spoken like someone campaigning for the Iowa Presidential caucus!

I like how Johnson embraced the challenge of playing on European soil, a place where the U.S. team hasn’t won since 1993!

“I love going over there and competing,” said Johnson. “I love stretching myself. I love being uncomfortable,” Johnson said. “It is going to be hard. But it’s also just a beautiful opportunity to go out there and give these guys an avenue to be themselves and play with freedom, and that’s kind of how I’m going to approach it.”

As mentioned, the venue is Rome’s Marco Simone Golf & Country Club. It has served as the host of the Italian Open and, as such, some European players will be more familiar with it. However, now that the PGA Tour is the home to the game’s best players, including the top Europeans, the Italian Open and its course haven’t attracted a Ryder Cup-calibre field. In fact, last year only Tommy Fleetwood competed there and also Whistling Straits.

However, it may be more convenient for the Europeans to play in Rome within the next two years as it was for Americans to play Whistling Straits leading up to the Ryder Cup last September.

“That’s where we’re going to stay. We don’t feel like we need to change it; and I say that, it was The Ryder Cup Committee of three of my peers and Jim (PGA President Jim Richerson) and his peers (making the decision.)

Incidentally, one of those PGA of America’s Ryder Cup Committee members is CC of Lansing’s John Lindert, currently serving as the Vice-President of the PGA of America.

photo courtesy of PGA of America.