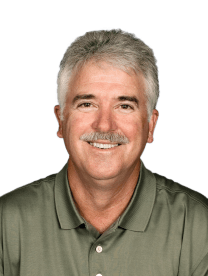 Forty years ago, Mt.Pleasant’s Dan Pohl made his Masters debut. He qualified for the prestigious tournament in Augusta by virtue of his 3rd place finish at the 1981 PGA Championship. The previous two years he led the PGA Tour in driving distance (274 and 280 yards respectively.)

An all-around star athlete at Mt. Pleasant HS, Pohl excelled in basketball, baseball and golf. In his senior year, he was a point guard in basketball and led his team to a 20-0 record. In baseball, he was 10-0 as a starting pitcher and caught the attention of Major League scouts. He attended the University of Arizona and played on the Wildcats’ golf team. In 1975 and 1977 he won the Michigan Amateur championships at Belvedere. In 1977, he turned pro and joined the PGA Tour in 1978.

He won twice on the PGA Tour, both in 1986: The Colonial National Invitation and the NEC World Series of Golf. In ’87, he won the Vardon Trophy emblematic of the lowest scoring average of 70.25. That same year, he played on the U.S. Ryder Cup team at Murifield Village, OH. He’s the last Michigander to make the team.

Pohl also spent some with NBC-Golf as an on-course commentator and as a radio personality in Phoenix, AZ where he resides in the winter.. In the summer, Pohl manages Pohlcat Golf Course, which he designed in Mt. Pleasant. He savors spending time with his children—Michelle, Joshua, and Taylor.

This conversation was conducted and edited for clarity and length by Terry Moore.

Talk about the weather on the opening two rounds at the ’82 Masters. One writer described Thursday “as miserable as anyone could ever remember for the Masters or any tourament.” In fact, two pros—Frank Conner and Jim Thorpe—shot 88 and 89 respectively. There were only three scores at par or better. And Friday morning, when play resumed, wasn’t much better.

POHL: The weather conditions on Thursday and Friday were tough for everybody, especially for someone like me who trapped the ball on the irons. My iron play was always my strong point. My consistency was with distance control, allowing me to dial in with my irons. But that strength was negated by the weather. People often say one’s handling of the greens is important at Augusta but equally critical is controling the spin and the distance on iron play.

POHL; I thought my score was better than it looked. With that weather, it was tough to make birdies. After 36 holes, the lead was at even-par at 144 (Craig Stadler and Curtis Strange) so yes, I thought my chances of winning weren’t good. But I was happy to make the cut and really my goal was to finish in the Top 24 on Sunday, guaranteeing me a spot the next year.

Before you talk about the weekend, who was your caddie and how much did he help you?

POHL: His name was Slim, a regular caddie at Augusta National. He was excellent at reading my emotions and knowing how they might affect a shot, particularly with my irons. He knew what type of shot I should hit, with spin or no spin. As I said, the strength of my game was distance control with my irons and Slim grasped that. As far as putting, he knew the greens but no caddie can really tell you precisely about how soft or firm to hit a putt. I knew that was on me. 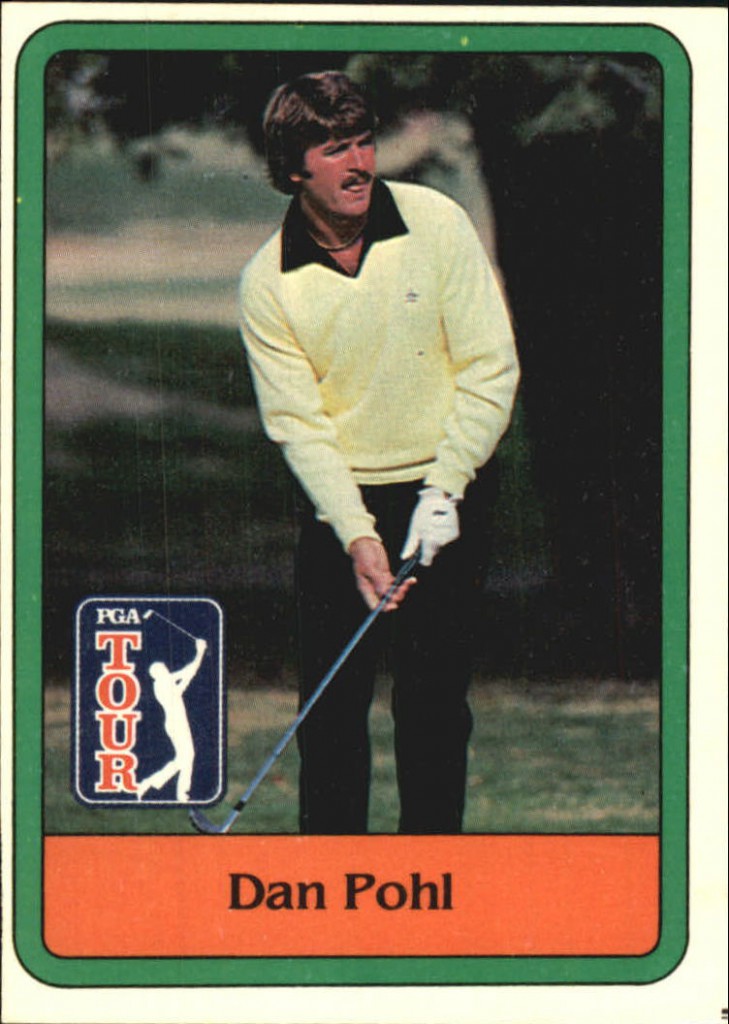 Please talk about Saturday’s round.

POHL: I always thought the front nine at Augusta was three or four shots harder than the back.
For example on the par-five 2nd, that was a hard tee-shot for me because I was a cutter. I had to aim down the left side and it had the chance of hitting a limb on that side. And on the eighth, the second shot to get it close to the green requires a draw. So to me, those holes might be birdies but not eagles.

That’s an understatement! You set a Masters’ record by going 6-under in a four hole stretch—eagles on 13 & 14 and birdies on 15 and 16. What do you remember about that?

POHL: My eagle at 13 wasn’t a big surprise. I had eagle putts there all week. On Saturday, I hit a three-wood off the tee and then I found the green with an iron. The flag was in a gettable position, lower left and middle of the green. Made the putt.

On 14, that’s the toughest driving hole for me, again being a cutter. There’s a big tree down the left side which I had hit in an earlier round. So I leaked my tee shot and found the right rough. With the pin in the back right corner of the green, I hit a wedge just behind the hole and it spun back into the hole.

What were your thoughts then?

POHL: I was still only three-under for the round and 1-over for the tournament. I did think at the time: ‘No matter what, I got two pairs of crystal goblets!’

Yet I knew at Augusta you can’t get ahead of yourself. And the 15th hole was still tricky. It was reachable for me with a 4 iron, but if the ball on the green was a tad short it could fall back into the water and turn into a six. But I made birdie at 15. Then on 16 I hit a little six-iron to a pin on the top right shelf, only three-and-a-half feet away but above the hole.

It was a devil of a putt because if I missed the cup it would easlily fall down the slope and it would be tough to make bogey. It was the toughest putt I had so far in the tournament. But I made it and it was a big relief.

That stretch of six-under in four holes brought me back in contention. In fact, it’s a sequence under par no one has duplicated at the Masters since 1982. But there was a lot of golf left.

How did you sleep on Saturday night even though you were six shots behind Stadler, the leader?

POHL: Because my family was staying in the same house, I was at an even keel. I mean, six shots is a lot of shots to make up in one round. But that third round showed me I could play the golf course. Plus, I felt good about my chance to make the Top 24 and be back next year.

You got off to a great start on Sunday with birdies on holes one and two.

POHL: In those days I was one of the only guys who could carry that fairway bunker on #1 so I only had a wedge or so into that green. And then I followed up with another birdie on #2. Though I shot 3-under on the front nine so did Stadler, so I was still six shots back going to 10.

What do you recall about your back nine?

POHL: I made my only bogie of the day on 14 which was a tough driving hole for me with my cut. I made a great par on 15 after a well-struck three-iron found the green but fell back into the water. But I got up and down to save par. I still wonder to this day what would have happened if that second shot had stayed on the green.

But I made birdie on 16 after a shot to within a foot and parred in.

Did you watch the scoreboards and know where you stood?

POHL: I wasn’t a big scoreboard watcher. At that time, my good friend was Mark Lye and he was obsessed with watching the scoreboard in terms of making cuts, finishes and where he stood throughout the round. It made me too nervous so I didn’t do it. Too much scoreboard watching at the Masters will make you get ahead of yourself.

On 18, I had a twenty-footer for birdie and I hit a good putt but left it short. I didn’t want to get too aggressive and get above the hole on my first putt. Still, I was very happy posting another 67.

With whom were you paired on Sunday and what did you do after you signed your card?

POHL: I was paired with Tom Watson, the defending champion. Afterwards I hung out with my parents, family and friends from Michigan near the putting green. Stadler was five pairings or so behind me. In hindsight, maybe I should have spent more time preparing for a possible playoff. But that was never my mindset at the time. I just stayed loose with my family. Then I heard Stadler three-putted 18 and we were tied.

Talk about the sudden playoff starting on 10.

POHL I wasn’t worried about the drive because I was cutter, as was Stadler, and we both hit three-woods. For our second shots, we both hit six-irons. Craig hit first, kinda chunked it and came up 35-feet short of the flag but below the hole.

I hit a better shot, I thought, but it leaked off to the right fringe which meant I had to deal with a little knoll between me and the pin. It left me in a tricky position even though I was closer than Craig. Anyway, Craig putted up to within a foot so I knew he had a par.

My putt all depended on speed. I didn’t hit a good putt and left myself with a five-footer. I hit it a little too hard and it didn’t take the break. Game over. 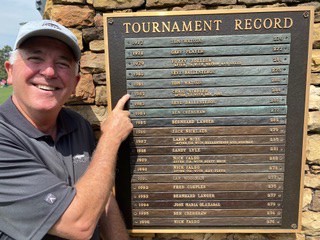 Besides the obvious disappointment, how did you feel at that moment?

POHL: Some people came up to me afterwards and told me they’d been sitting on 10 green most of the day and said no one had two-putted from where I had been. So that was somewhat consoling. It just reinforces the point that playing well in the Masters is being in the right spot on the greens. There are some places from which two-putting is difficult. Unfortunately, I found one on 10.

When did you last attend the Masters?

POHL: Having last played in the Masters in 1989, I didn’t go back until last year, 32 years later And the first place I visited, you guessed it, was no.10. If there was one shot I wish I could do over it would be my second shot. I just needed to be left of the flag. Making par was key because due to my length the advantage goes to me if we tie and play no. 11. Thinking back, it wasn’t my putts on 10 that foiled me but rather my iron shot.

Talk about your special prizes and memorabilia from the Masters. In checking the record book, in ’82 alone you received a silver medal, a sterling silver salver, crystal vase and four crystal goblets. And you earned more in other appearances.

POHL: I know where they all are. They’re special. And the records probably don’t show the crystal that I earned for making an ace one year in the Par-3 Tournament.

After all these years, how to do you sum up what happened in 1982?

POHL: Sometimes I wish I took it all in at the time and really appreciated it. But I always tell people when they say I finished second at the Masters, ‘No, I didn’t. (With a chuckle) In ’82, I tied for first and lost in a playoff.’