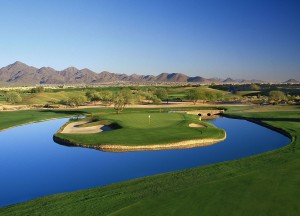 The 15th green at TPC Scottsdale

Let me tell you flat out, it was tough being a wounded Golf Road Warrior (I pulled a lower chest muscle the day before) and not able to play the eagerly anticipated TPC Scottsdale Stadium Course. For weeks I’d been thinking about my tee shot at the famed par-three 16th hole, locus of the loudest fan party in golf during its annual PGA Tour stop. My dream was to stiff my iron shot next to the flag and then tip my cap to the imagined throng of rowdy onlookers.

But stuff sometimes happens to us senior players and so instead of being “a player,” I became a “veteran observer” and “astute notetaker” during the round. Surprisingly, not only was it an enjoyable diversion, it kept me occupied and out of trouble. As the bumper sticker seen on the way to the course opined, “I’m out of bed and dressed. What more do you want?”

Anyway, here are some observations and notes taken during my non-playing walkabout at the Stadium Course:

Reader, permit me now to suspend further notes of my visit to the TPC Scottsdale. It’s just too painful to relive the pain. No, not the pulled chest muscle; rather the sheer ache and horror of traveling so far and not playing this worthy test of golf.