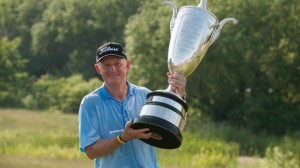 In spite of it being an awkward venue for spectators to get around, the Senior PGA Championship held at Harbor Shores in Benton Harbor was a resounding success on many fronts. First, the weather was summer-like and virtually void of weather delays and rainfall. In fact, it may have been almost too good with hot and humid temperatures. One observer said a year ago on the same date, the weather was gray, cloudy and with temperatures only in the mid-forties. Ah, Pure Michigan. The favorable weather over the Memorial Day weekend certainly contributed to a strong turnout. Even on Wednesday and Thursday, the crowds were very respectable.

One must commend tournament organizers, starting with presenting sponsor KitchenAid of Whirlpool and KemperSports, for aggressively marketing tournament ticket sales throughout the past year. In my tenure in the golf industry in the state, I’ve never seen an event promoted as widely as this event. In the Grand Rapids media market, television ads touting the Senior PGA ran on all of the major outlets for months. No one could say they hadn’t heard about Harbor Shores. And even losing defending champion Tom Watson, due to an injury, didn’t dampen the attendance.

In the pre-tournament interviews, there were some player concerns about the penal nature of the Jack Nicklaus design, particularly in relation to the green complexes and putting surfaces. Specifically, the tenth green came in for some valid criticism for its over-the-top mounding and huge “bunny hill” drop-off. Mild-mannered Fred Couples even said it was “a little too much.” Bernhard Langer said, “I think it’s a phenomenal golf course from tee to green.  One of the world’s best, I would say, but could be the most severe or worst green complexes I’ve ever seen in my life.” Fred Funk said, “the greens I think are a little too busy, but they are what they are… I don’t mind a lot of movement to the greens or even terraces, but give us some flat areas where you can have the officials go out there and…have five or six or four really good pin placements.”

The galleries were impressive all week

During the opening round, such criticism was compounded when the prevailing wind direction switched and made scoring particularly difficult. In the afternoon teetimes, only one player broke par. Pre-tournament favorite Michael Allen shot 77. But on Friday, the winds switched back and conditions were more forgiving. Allen’s score improved by 13 shots. From then on, the players were off to the races and birdies arrived in bunches. So in spite of all of the concerns about the difficulty of the design, the players ate it up. Eventual champion Roger Chapman put on a ball-striking clinic, hitting fairways and greens throughout the week. On Sunday, Kenny Perry fired a 62, establishing a new tournament record. In sum, the game’s best players didn’t have any problems with Harbor Shores.

The course itself, thanks to Superintendent Brad Fry and his staff which also included a host of volunteering superintendents, was in superb conditions and looked spectacular on television. Considering the course only opened two years ago over some difficult and  unsightly terrain, this was a remarkable achievement. How this once forsaken land, a favorite dumping ground and a site of dilapidated, vacant buildings, was transformed into a world-class development is really the compelling story of Harbor Shores. With a total investment of a half-billion dollars, this 530-acre residential, golf, recreational and waterfront community is a showcase for the cities of Benton Harbor and St. Joseph. More importantly it has galvanized the area and fostered new and strong civic alliances.  In addition, the development has nurtured the Boys & Girls Club and The First Tee of Benton Harbor. Whirlpool Corporation and the Whirlpool Foundation have been stalwart citizens in all of these endeavors.

Kudos to the Michigan PGA for its collaborative efforts with the tournament. I noticed many Michigan pros in attendance and also volunteering at the practice range. Heck, one West Michigan pro even picked up a chipping lesson from guru Stan Utley. Tournament organizers smartly implemented a spectator trolley system which lessened the “hard walk” posed by the vast layout (6.2 miles of cart paths.) But to get to some scenic holes—say 7-9 or the infamous 10th green—spectators still needed a long trek. And sadly there were only a few observations stands for spectators. More stands should be planned for 2014 when the event returns.

All in all, a notable week for the PGA of America, Harbor Shores, southwest Michigan and golf itself. It will only get better in 2014. Count me in again.

Photos courtesy of PGA of America