OK, I’m admittedly biased but one of the best state travel initiatives has been the Pure Michigan campaign. It has done a stellar job of recasting our beleaguered state in a lively and creative manner and shedding a positive light on its enormous tourism assets. In particular, the golf aspect of the award-winning media plan has broadened Michigan’s appeal beyond the Midwest. I learned this first-hand when I was in the Philadelphia area last fall. 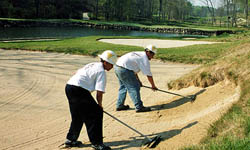 Through the suggestion of a golf writer colleague, Tony Leodora, I played the admirable Golf Course at Glen Mills. It’s located about an hour or so southwest of Philly and it’s on a number of the “state best lists.” But what really sold me on playing it was the story behind the course. The golf course is the product of Glen Mills Schools, the oldest (1826) existing residential facility in the country for troubled youths. Designed by Florida course designer Bobby Weed, the Golf Course is an integral part of the school and its mission statement.  In fact, the course provides a realistic, “hands on” vocational training venue for students in turf management and golf shop operations. Approximately 50 students (several from Michigan) work on the golf course in some capacity. And they do an excellent job. I must admit I have never putted on faster public greens. One needed soft hands without any “hit’ on the blade to manage the slick putting surfaces. Due to its tight fairways and the movement on greens, the overall design is borderline penal. But if one plays from the right tee markers, it’s very playable and fun. 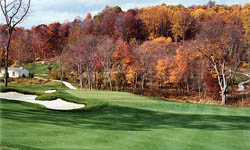 In the fall, Glen Mills is a scenic delight

The other treat about playing Glen Mills was being paired up with some local golfers especially since I was a newcomer to the layout. One player was a manufacturer’s rep, one owned a sign company, and another owned a window and door company. They all knew each through their kids and sports. And they all played at scratch in terms of needling each other. They were friendly playing partners and I enjoyed their company immensely. The sign company owner the night before witnessed with his son the Phillies clinching the National League title and getting into the Series. In spite of being out until the wee hours, he played solidly. And I particularly liked one of his buddy’s lines about a Phillies player’s stunningly beautiful wife seen on the field after the game. “She’s a dime!”

In my cart was Eric, the window and door company owner. We hit it off when we discovered we shared a mutual admiration for the movie “Young Frankenstein” and particularly for actor Marty Feldman who played Igor. Several times, the rolling greens at Glen Mills prompted us to echo that immortal line from Igor: “What hump?”

After our round, I told the guys I wanted to buy them a beer. Since Glen Mills doesn’t serve alcohol, we ended up nearby at a rib joint. In a nice surprise, this place served complimentary brews for golfers bringing in a scorecard. So instead I bought lunch for my newfound Philly friends and still got change back on my twenty. Yes, this is some country.

But before we departed, we talked golf and favorite courses. All of them had seen the Pure Michigan golf ads on The Golf Channel and were curious about the state’s courses. Their usual guys’ getaway destinations have been the Carolinas and Alabama. Naturally, I told them Michigan in the summer and fall was hard to beat for the depth and variety of good golf courses. I possibly even closed the deal on them visiting Michigan sometime in 2010 or 2011. When asked by them how I would rate Michigan’s courses, there was only one apt reply:

2 Responses to “Pure Michigan booster on the road: The Golf Course at Glen Mills”