(Grand Rapids, MI) At an upbeat press conference  on June 10 in Grand Rapids featuring LPGA standouts Morgan Pressel and Nicole Castrale, the inaugural Meijer LPGA Classic presented by Kraft launched ticket sales for the tournament set for Blythefield Country Club on Aug. 7-10. The backdrop was a bright red argyle-design banner boasting the logos of the LPGA and sponsors. Red argyle and the #GRgyle hashtag have been splashed around downtown Grand Rapids for weeks as part of a marketing tease campaign about the tournament, the first LPGA stop in Michigan since the 2000 Oldsmobile Classic in East Lansing and the first professional major Tour stop since the 2009 Buick Open. However, an even brighter backdrop was the announcement of tournament ticket prices.

Available online now at www.MeijerLPGAClassic.com, tickets will be modestly priced at $35 for weekly tickets; $15 for anyday general admission; and a limited number of upgraded reserved tickets costing $50. Kids, ages 17 and under, will receive free admission with a ticketed adult. Hooray for this news—especially considering the oft-told worries about golf and its challenges for growing the game among today’s youth and their families. Meijer President J.K. Symancyk said, “As a retailer, we know our customers are looking for quality products at affordable prices and the Meijer LPGA Classic is no exception to our way of thinking. Ticket prices have been set to encourage families to join us as we welcome the best women golfers in the world to Grand Rapids.” In a sports world gone mad demanding unsustainable ticket prices for most families, Meijer is striking the right chord for the West Michigan marketplace.

At those affordable and attractive prices, strong galleries are expected all week at Blythefield CC, one of West Michigan’s top private courses which hosted the 1953 Western Amateur won by Dale Morey, the 1961 Western Open won by Arnold Palmer and the 2005 Western Junior won by Rickie Fowler.

Other notes and quotes from the Press Conference:

Kraig Kann, a former sportscaster for WWMT-TV in Kalamazoo, and now the LPGA’s Chief Communications Officer after a successful stint with the Golf Channel, said: “This is not a minor league event, this is big-time stuff, with the best players on the planet coming to Grand Rapids.” Along with citing a list of impressive LPGA metrics such as more worldwide tournaments, more marketing partners, higher purses, increased television ratings and higher social media trends, Kann added about LPGA players, “They’re not only the best athletes in their sport but they’re also the best ambassadors of their product in all of professional sports.” Kann said LPGA players, as evidenced by the Pro-Ams, “understand customer first and customer friendly.”

And of course, it doesn’t hurt that out of first 14 LPGA events, seven of the winners are Americans led by Stacy Lewis, currently the no. 1 Player in the World. Barring injury or unforeseen circumstances, Lewis should be teeing it up in Grand Rapids. On this note, this is a major plus about the LPGA over its big brother PGA Tour. The top stars of the LPGA generally play most if not all of the Tour stops and rarely skip events so commonly seen on the PGA Tour. When Grand Rapids and Egypt Valley CC hosted a Champions (nee Senior) Tour event, many of its top stars opted not to play due to scheduling and not wanting to play too many events.

In contrast, Kann told me, “It’s a bad week for us when we only have eight of the top 10 players in the field. That’s the beauty of the LPGA Tour: our top stars are coming week in and week out to these tournaments. On our Tour, no one talks about who’s not playing in a given week and no one will be talking about who’s not playing in the Meijer LPGA Classic.”  Kann said the LPGA schedule of three or four weeks on and one week off allows the best players some breathing room. “When you have players traveling the world playing in events, you need some built in breaks in the calendar.” 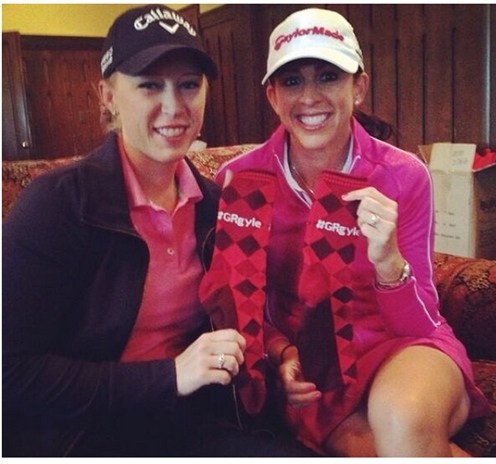 Morgan Pressel, a major LPGA winner before she was 19, talked about growing the game among young girls: “For me, seeing kids coming out to the tournament is a big deal. And it can make such an impact for them just seeing young women playing golf and thinking, ‘Hey golf is cool.’ I hope some of these girls will go home after seeing us and maybe ask Dad to take them to the driving range. Many times they just need a spark or motivation to get them started in the game. We have the ability to get kids interested in the game.”

Pressel talking about her Michigan roots: “All of my family are from Michigan. My uncle, Aaron Krickstein, a professional tennis player, grew up in Michigan and he played many times in Kalamazoo’s national junior tennis tournament. Although I lived most of the year in Florida, I spent my summers in Detroit living with my grandparents. I played and practiced at the Lockmoor Club in Detroit.  I played in junior golf tournaments in Michigan including the PowerBilt Junior Tour which is now the Meijer Junior Tour. I’m looking forward to my Detroit relatives and friends coming over to Grand Rapids during tournament week.”

Nicole Castrale, an LPGA winner and Solheim Cup team member: “PGA Tour players don’t have  to play every week because their purses are so big they have the freedom to pick their own schedules. Our purses are not as big but we can still make a very good living out here. Most LPGA players will play three weeks in a row. This event (Meijer) falls at a really good time as it’s a week before a major (Wegman’s LPGA Championship) so I expect you’ll see a really strong field here.”

Nicole Castrale about being a mom on tour and traveling with her husband and caddy (Craig) and daughter (Eleni) born November, 2011: “We have a lot of checked bags (laughing.) Along with my husband and daughter, my mom travels with us when we’re here in the U.S. On average, we check eight bags when we travel. Other players look at us and say, ‘How do you do it?’ But we wouldn’t have it any other way. The LPGA has allowed me a platform to be working mom.”

The charity tie-in for the tournament will be Meijer’s Simply Give program which combats hunger by supporting food banks and pantries throughout the Midwest.