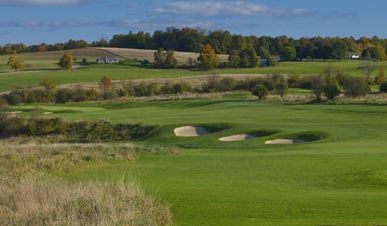 16th Tee. Anything Over the Bunkers Kicks Hard Towards the Green

Architect Steven Kay likens a good golf course to a good movie.  “I like to design holes that absorb golfers while they’re playing them, and that they remember afterwards,” he says. “It’s no different than what moviemakers strive for.  Make something engaging and memorable.”

If golf courses worked like movies, Kay and his senior associate, Doug Smith, might have some metal on the mantle for their Links at Union Vale course.  They took a 200-acre parcel of former farmland in the upstate New York town of that name and created a semi-public layout that is always engaging, and frequently memorable.  Built on a nearly treeless site, its wide vistas give it the feel of a links course, while it’s greenside bunkering calls — on most holes — for a more like a parkland style of play.

Kay calls the blended outcome a heathland course.  Labels aside, it’s beautiful to look at, and offers plenty of opportunities for tactical thinking.  The USGA was impressed enough to hold U.S. Amateur qualifying play on the course several years ago, and now, in the year of its tenth anniversary, we can say it’s held up well with absolutely minimal tinkering.  Besides being virtually treeless, the gently rolling site is festooned with  the blackberry canes, purple loosestrife, untamed fescue and squadrons of the Christmas-tree sized junipers that seize reverting farmland in New York. The property also contains a wetland, narrow and swampy in some places, ballooning into small ponds in others.

Letting the shape of the land influence the shape of the holes, Kay and Smith rode the easy swells and troughs of the site.  They drew from the character of linksland a dependence upon lethal rough (that fescue, loosestrife, and cane gorge themselves on errant shots) along with fast turf (“We keep it a little bit hungry,” is how members describe it), and a smattering of bump and run opportunities.  It’s fleshed out with shaggy-browed bunkering evocative of  the Old Country, and a good number of lozenge-shaped greens set obliquely to the center line of play. They’re quick but not greased.  Pronounced slope and contour make imaginative approaches the most important element in leaving it close.

The result, with four sets of tees providing very different looks ( 5198 from the front and nearly 7000 from the tips), is an eminently flexible course — Kay says he wanted middling players coming in under 100, and better players toiling to break 80.  To that end, the golf course calls upon tactics most of the way, and muscle for a finish. It’s a layout of great beauty, and one that rewards the cunning tactician over the robust attacker.  Shrewd are the players who walk off the 18th green with a score better than their average.  It’s a course that asks for some muscle at the last, but even the long finishing holes can be worked for up-and-down pars.

That the site evokes links-style golf is no surprise, for it is the realized dream of roughly a dozen New York City-area Gaelic golfing societies.  Filled with passionate players, the societies lacked a course of their own.  Their love of the game found them spending Friday nights in the parking lots of  municipal courses, waiting to secure a tee time for Saturday morning.  The waiting was miserable, the rounds long, the playing conditions poor.  They wanted their own course, and they wanted it to evoke the courses of Ireland.  Pooling resources and setting a condition that their course should be within roughly one driving hour of New York, they went site-shopping.  Their purchase, at 200 acres a postage stamp in terms of golf course site size, was made affordable by its location beyond easy commuting distance to New York.  They created a first-rate semi-private club, crowned by a 19,000 square foot Georgian-style clubhouse on the site’s highest spot.

They hired Kay on the strength of a resume that includes a layout, the highly-regarded Links of North Dakota, sited on similarly open terrain. Equally important to Kay’s conception of the Union Vale course, however, was his renovation work, which familiarized him with the light touch of golf architecture’s Golden Age classicists: Tillinghast, Colt, and Ross among them.

“I often design front nines that emphasize tactics and give the player a chance to find his or her game without a lot of distance pressure,” says Kay.  “The finish asks for distance combined with accuracy.”  The pitcher Lew Burdette once explained his success by saying, “I live off the hungriness of the hitter.”  On the outward nine, insistently aggressive players, hungry for birdies, are likely to be bloodied by rough that just doesn’t quit.  The first two holes, a 410-yard par-4 and a 500-yard five, cross a wetlands on the approach, forcing layups off the tee.  The course begins to catch its rhythm on the third, a 200-yard par three.  A bunker is the best place to be for a miss to the right, which falls away into the chaos of the rough.

Here as well, for the first time but not the last, the beauty of the surrounding landscape becomes apparent.  The rolling hills of Dutchess County spread in all directions, the Hudson Highlands rise in the south, and to the northwest the Catskill Mountains form a rumpled horizon.

The next three holes exemplify the hunger Burdette talked about.  Here begin the risk/reward holes that pepper the golf course. Dogleg par 4’s all, they run 358, 364, and 334 yards, but less on straight line flight.  All three cry for a hammered driver which, hit on line, has every chance to run up very close to the front of the green, or even roll on.  To miss, however, is to see the ball vanish into tangles of unplayable rough, a danger most acute on the 4th, which features a dogleg angled a full 90 degrees, or to get wet on the 5th, which requires a long carry over a pond to get close. 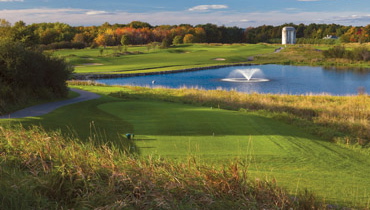 The 5th Tee. Airmail the Water For a Wedge Home.

The observant player is now conversant with the architecture, alert to the fact that position trumps distance and that club selection from the tee has to be considered.  Will it be the driver?  Or the neat one-two of a short wood down the generous fairways and a short iron home?  This theme, high risk for high reward, is the leit motif of the front nine.  The ninth, a rolling par-4 of 354 yards to a plateau green, is one of the layout’s most eye-pleasing and subtle holes.  A long, angular set of bunkers, running fully across the fairway from short right to long left, is easily carried unless the hole plays into the wind.  But a driver down the center drifts left on the roll and leaves a more difficult approach: a half-wedge over a large bunker to a shelved green.

The smart play, a fairway wood well right, leaves a full club in from a lie level with the putting surface.  In fairness, this is knowledge gleaned from experience with the course, or advice from a partner who’s played it before, but it’s a wonderful hole even if it does have a gotcha about it.  And it whets the appetite for another try at it.   It’s also another good example of the value Kay and Smith place on position versus length. When the front nine is finished, the driver will have been the clear club of choice on exactly one outbound hole: the straightaway par-5 eighth.  And with all the meticulous play required to navigate the side, the hole that leaves the deepest impression is the one with the deepest depression; the par-3 7th.  It is a foxy hole, the only one on the golf course that plays truly uphill.  That adds a club—or does it?  The card yardage is 180, but the hulking bunker, dead center, just doesn’t look that far away.  And the green is tough to see up there.  Looks like a flag laid against a backdrop of swarming rough.  Club choice doubt, a recipe for disaster, has been introduced.

What Kay has in fact done is site the bunker a good 20 yards short of the green, where it raises visual havoc from the tee while hiding the most memorable green on the golf course.  Good-sized (as it turns out), its front left quadrant looks as though the superintendent let the air out of it.  Sitting a good five feet below the rest of the putting surface, it turns an otherwise reasonable green into a potential disaster.  There is no pin position, no landing zone, that takes the fear away.  Back right seems best, taking the depression out of the direct line.  But all putts from the rear of the green will swing down the broad contour of the green, and to truly take a run at the cup means coming as close to the crest of the pit as a matador does to the horns of the bull.  A ball on its way down the steep slope into the depression gathers speed as it goes and flees the green completely.  Putting up out of the pit is no less of a problem: not enough oomph and back it comes.  Too much and you’re looking at the yawning jaws of the pit once more.

It is easy enough to gouge a crater into a green.  But Kay and Smith simply used an already existing hollow as part of the putting surface, and they pulled it off without creating a circus, only a very lonely feeling for one standing over a putt.

The tempo changes abruptly on the inbound nine.  The first four holes, including the final pair of par-3s, are nothing to trifle with, but their tenor is familiar.  Then the bell lap begins.

First, a 602-yard dogleg left par 5 with a fairly long forced carry over a wetland on the second shot.  A good long tee shot — a best of the day type — is a must.   A row of bunkers on the far side of the crossing line up the carry shot.  Accomplish that, and  a good short iron play to a deep, narrow green protected by a bunker left and large moguls right is all that remains.  A string of long par-fours follows.  Fifteen measures 430 yards, passing the club’s signature grain silo as it goes, 16 is near 440, and 17 is the let-up at a slightly uphill 400 yards.  The 18th, a 590 par-5 that calls for one last long forced carry, finishes the side, the day, and often, the golfer.  If you like to score, it may not be your cup of tea, but the five-hole run that closes out the course, fraught with beauty, challenge, and peril, is not soon forgotten.

“Mr. Kay goes easy on you for awhile,” says Phil O’Mara, the driving force behind the creation of the club and its first president.  “He likes you to feel good after nine.  After 18?  Well, that’s another matter.”

The clubhouse bar is handsome, decorated with the frosted, cut glass panels redolent of Ireland itself, and as any good grill is, an equal opportunity oasis for the triumphant and the whipped.  And it offers compelling evidence that the course’s antecedents are Irish: Guinness on tap, poured slowly, in traditional fashion.  It’s a last reminder that on The Links at Union Vale, the race goes to the patient, not the swift.