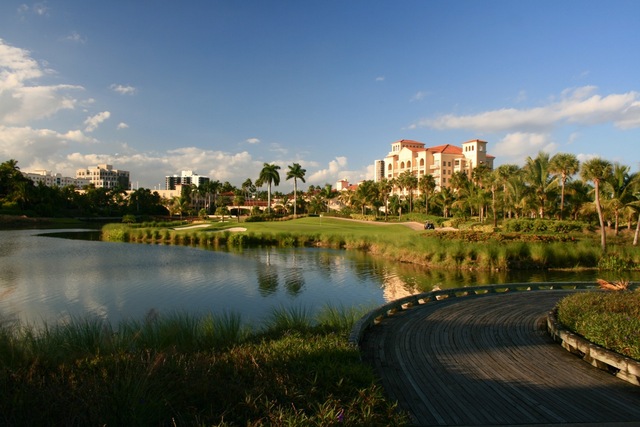 After a $150 million modernization, Turnberry Isle’s Soffer Course is a playground of golf, grass, water and landscaping.

Turnberry Isle in North Miami is a tale of two resorts.

The first was a swinging 70’s-era “Love Boat” style romper room frequented by Hollywood luminaries (according to photos in the restaurants) like Jack Nicholson, James Caan, Elizabeth Taylor, O.J. Simpson, Burt Reynolds and an international cadre of sheiks and princes. It was a place where personalities made the actual accommodations irrelevant, where high-stakes golf and tennis in the morning gave way to yachts and pool fun in the afternoon, and at night…I think you know what happened at night. Turnberry was a legend in its own time.

The second Turnberry is a family-friendly corporate-feeling luxury resort with high-end rooms and breezy common spaces, two modernized golf courses, name brand chef-driven restaurants, courtyard pools and even a waterpark for kids. Debauchery, my friends, has left the building.

I know which version I’d like to go to, but if you’re in it for golf, today’s Turnberry Isle is the place to be.

The original version of Turnberry Isle, which opened in the early 70’s, was the incarnation of Harry Soffer and his son Don, a major player in South Florida real estate. In addition to developing the hotel and 36 holes of Robert Trent Jones-designed golf, Don Soffer and his partners orchestrated the transformation of nearly 800 acres of canals and swampland into a shining Aventura skyline of condominiums that rise like Mayan temples above the once primitive jungle.

The resort changed ownership numerous times in the following decades but eventually landed back in the Soffer family lap in 2005.  In 2006 they commenced a $150 million renovation which transformed the property into a Mediterranean-themed oasis. The old Trent Jones South and North courses, from 1971 and 1974, were revamped by Hall of Fame player Ray Floyd and renamed, respectively, the Soffer and Miller Courses. 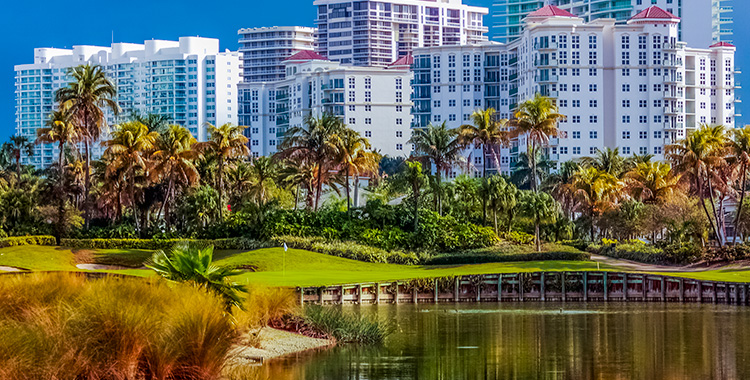 The golf here is basically typical of what you find everywhere in South Florida except for the presence of high-rise condos that encircle the course like an arena. You may not like playing golf in the shadow of towers, but their intimacy provides a unique backdrop and frames holes with unmistakable targets.

The original South Course was full of flat holes with large, stock Trent Jones greens flanked by bunkers and water. Floyd stripped everything down, imported untold amounts of fill and created elevated fairways and greens with flowing movements. During the redesign holes were shifted left or right, dune barriers were built between holes, a new water hazard was created between 9 and 1, and various forms of sedge and flowering vegetation were planted. 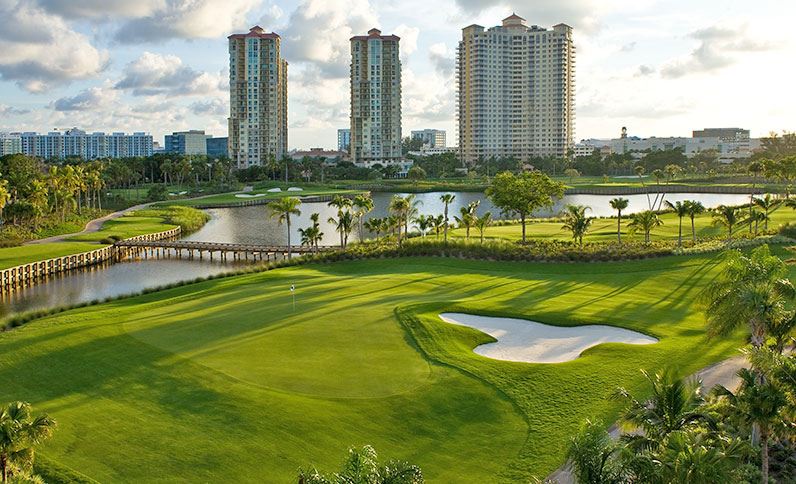 The Soffer Course’s 16th and 17th holes are framed by water and the surrounding towers.

There’s nothing subtle or natural about the course. But on land like this, where even turfgrass is unnatural, going modest is a losing proposition. That’s basically what the Trent Jones course was, and it was lifeless and repetitive. Give Floyd credit for keeping it interesting and adding an air of exhibitionism, a quality not out of place in South Florida.

The monolithic waterfall left of the 18th island green (yes, a waterfall and an island green on the same hole) is obnoxious, but it does provide a refreshing mist as you walk or ride by it. Word is it’s one foot taller than the waterfall at the Donald’s, er, the President’s Trump International in Palm Beach (yes, the two Donalds were in a battle of waterfalls). 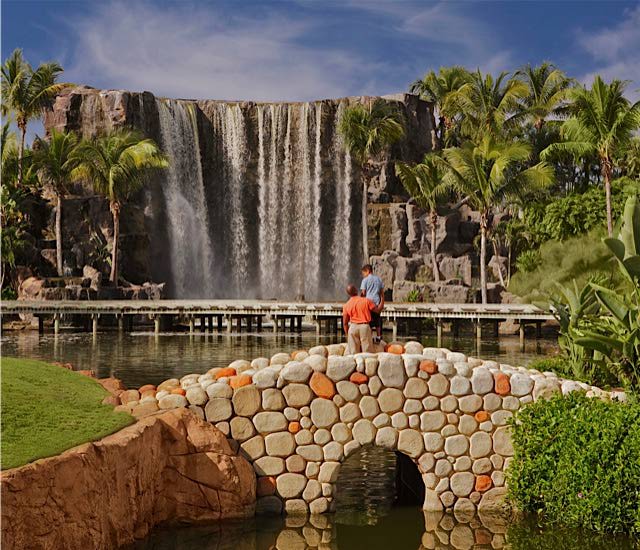 There it is, the enormous wall of water near the 18th green.

The ripple of the fairways and greens keeps the play interesting, Floyd’s bunkering is more harmonious and better scaled than Trent Jones’, there are just enough tantalizing shots to be played over and around hazards and, if you’re like me, you don’t mind craning your neck a little to look around at either the multi-storied horizon or the buffers between the holes.

Golfweek raters recently plugged the Soffer Course as the 14th best public access course in the state. I don’t have it that high, but it’s a fun and never dull round of golf. (87)

The North was always the little brother to the South Course, and the Miller remains so to the Soffer. Not only is it quite a bit shorter, it’s far less decorated, as if the remodel project hit an economic wall. Or maybe they just deemed it wasn’t worth the extra splurge.

11 or 12 holes play along several lakes, with 2 through 7 circling the property’s largest water feature. With so many diminutive holes (it tips out at just over 6,400 yards) you’ll find yourself with a lot of short irons and in-between wedges into the par-4’s. The greens have some joyous contour and if your not on top of your approaches you get a lot of long, breaking putts. But you also might card a few birdies. 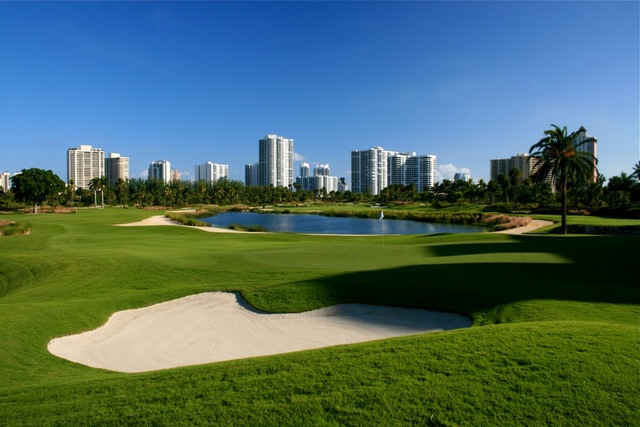 The Miller is a sporty, second-fiddle course, but it can be fun to play, especially as a warmup to the Soffer or for a late afternoon wind-down. You probably won’t be much impressed with the quality of golf, but then again,  it’s South Florida, and what are you doing here anyway? Go out, put your pretensions in the bag, and blast it around the property. Nobody claimed this was going to rival Scotland. (82)