The severely up and down terrain at Sanctuary Ridge is unique in Florida.

Any course that claims to be Florida’s “mountain course” cannot be taken seriously. This is a state that considers a mountain anything that’s higher than the roof of your house.

Sanctuary Ridge, located at the north end of Lake Wales Ridge near Clermont, is in fact situated on some of the state’s most vertiginous real estate. The site features precipitous drop-offs and rambling inclines that the routing tackles from all angles. With the aridness and sandy soils (this is citrus country) of the surrounding land, the course wouldn’t be out of place on the Front Range of Colorado where I grew up, or in the southern California foothills. The highs and lows force you to do something almost unheard of in Florida: calculate elevation changes.

I played the course before housing had overtaken the second nine and it was called Diamond Players Club because some of the initial investors were former big league players. It was thrilling then to experience the rawness of the site, especially in the context of Florida golf. The drop-shot approaches into the par-4’s at 10 and 11 are unique, and I can’t think of a stretch like 14-17 anywhere else in the state. It begins with a semi-blind one-shotter through a gap between two sand dunes, followed by two down-and-up par fours where your ball caroms unpredictably off slopes and embankments. The 17th is just 305 yards but plays so uphill that the fairway is stepped on three distinct levels, four if you count the green.

This was never a very polished course but the once open ruggedness has now been overwhelmed by the development, almost killing whatever widespread appeal it had. But what really precludes a higher score are the sedate putting surfaces, which are anticlimactic after negotiating all the contour to reach them. Perhaps not a great course, but still a must play if you’re tired of the usual Orlando fare. (84) 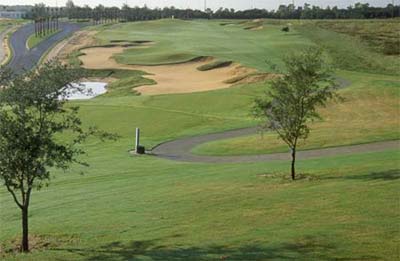