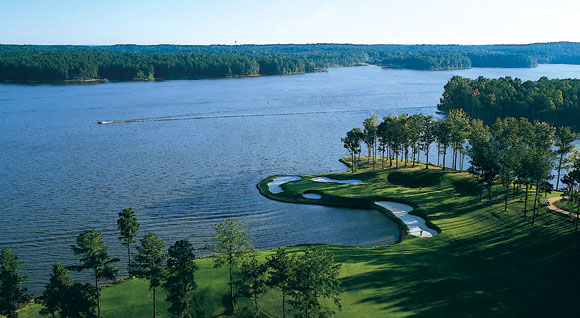 The short 11th, a risk/reward par four, is one of the most severe on an otherwise graceful course.

The development of Reynolds Lake Oconee (formerly Reynolds Plantation) is a little like the biological evolution of the human species. As time passes, organisms (in this case, golf courses) multiply, establishing themselves in their surroundings while slowly developing beyond previous versions. Eventually they become highly specialized within the context of their environment before, finally, they’re so advanced they’re able to overcome environmental limitations and impose their will on nature.

From Reynolds’ nearly primitive original Bob Cupp Plantation Course in the mid-1980’s (now renovated and called The Preserve) to the development of the sixth course, Jim Engh’s hybridized, multi-dimensional Creek Course, there’s an evolutionary through-line of style and complexity, not to mention a progression in how the courses interact with, and sometimes overwhelm, the land.

If this were a human evolutionary continuum, Great Waters, the development’s second oldest course, might fall somewhere between Homo erectus and early Homo sapiens. And for early Homo sapiens, it would be fantastic looking considering this is one Jack Nicklaus’ loveliest and most graceful courses of the 1990’s (it was also renovated, in 2010). Compared to Reynolds’ subsequent designs (Reynolds National, The Oconee), Great Waters is notably restrained and refined.

Nine holes play along the shore of Lake Oconee including eight on the homeward nine alone. They rise and fall through the wooded hills and play evocatively against beautiful watery backdrops.

Aside from the short par-4 11th where water and a necklace of bunkers choke an enormously wide but shallow peninsula green, Nicklaus’s shaping and hazard arrangements don’t compete with the lake views. He clearly wants the water to be the topic of conversation and allows the lake’s shoreline to do the architectural lifting.

Amazingly, 8 of Great Waters’ final 9 holes play along the shoreline.

There are a few designer-imposed flourishes for clubhouse guests and panel raters, I suppose, like the gut-check cross-water approaches on 9 and 18, and visitors will drool over holes like the par-3 14th and 17th holes over Oconee coves. But the best hole on the course is completely away from the lake, the mid-length par-4 5th where a creek crosses the fairway once diagonally and then again in front of a slender green creating elasticity in drive length and approach angles.

This little stream in front of the fifth green is as effective and evocative a water feature as the entirety of Lake Oconee.