How did these outcroppings get here at Fossil Trace’s 12th, and why are they in the middle of the fairway?

The hole people talk about the most at Fossil Trace, a public course in Golden just west of Denver, is the par-5 12th. One reason is because there are fossilized triceratops footprints and other Cretaceous remnants preserved in stone a short distance from the green.

Good enough. But the other reason, and of more primary interest to the striking of ye ball, is the three sandstone outcroppings that rise like Titan molars out of the fairway 80 to 135 yards short of the green. They’re horizontal and vertical impediments that you’ve got to tack around with your second shot or, if not, accept fate when your ball starts bouncing off them a lá a game of prehistoric pinball. Not something you see all the time.

The part of the property where the 12th hole is located was formerly mined for clay, with upright sandstone formations left behind after the surrounding ground was excavated. Satellite photos from 1999 show a series of these long sandstone ridges running northwest-southeast, including one that still forms a wall along the left side of the hole.

The three tooth outcroppings were also once part of the remnant ridges, but what I don’t know is if the sandstone broke down before the course was built or if architect Jim Engh knocked large portions of them away. [As for the fossils, I lived in Colorado at the time this course was first being developed and I recall their discovery brought about additional red tape and delays in the construction of the course.]

Whether Engh found and then oriented the hole around them or purposefully whittled them, it wouldn’t surprise me either way. His vision of golf is more identifiable than just about any living architect and making the outcroppings play such a strategic, confrontational role is a risk he’d relish taking. 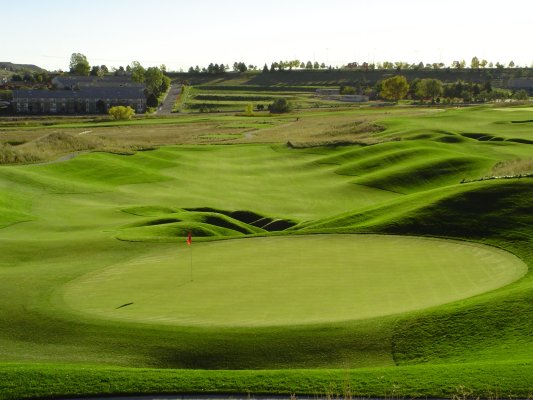 The amount of shaping is evident looking back on the par-4 7th, including the deep muscle bunker that fronts the bowl-like green.

Fossil Trace has all the elements and features Engh’s known for–blind shots, aggressive shaping and molding of the land, exaggerated tiers and punchbowl features on putting surfaces, alternate route holes and squiggly high-banked muscle bunkers. Yet if you were going to place it against the rest of his designs on a severity scale, it would probably fall somewhere in the middle.

The 12th is the most unique hole here, but other nominees would include the long par-3 14th and its rising escalator green, the par-3 11th with a winged putting surface nearly 60 yards deep, the downhill rambling first, and the short par-4 second, even if few of these are terribly original in the Engh canon.

The only real problem with the course–assuming you accept rather than reject this brand of golf styling, and taking in stride rote offerings like the par-5 18th–is that there are too many lackluster holes on the first nine. The uplands to the west and clay pit area around 12 provided Engh an array of interesting landmarks to play with, but the holes that spin out through the lower meadow–especially 3-6–are neither fish nor fowl. They’re too contorted to compliment the subtle nature of the surrounding grasslands, yet not brash enough to add real theater.

That’s kind of the thing with Engh courses. Play enough of them and you start to feel cheated if every hole isn’t a topic of conversation, filled with twist and whimsy and off-the-wall golf shots.

Golf’s Great Depression of 2008 took almost all domestic design business away from Engh and just about everyone else, and it will be interesting to see if his commissions in the future will come out tamer than in his bullish period of the early aughts. Golfers in Denver, at least, have a pretty good Jazz Age rendition of a Jim Engh classic. (90) 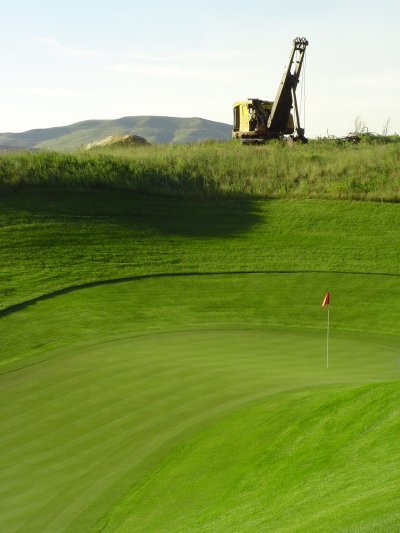 This photo is not warped or compressed–this is the high upper tier of the 14th green, along with some defunct clay mining machinery in the background.