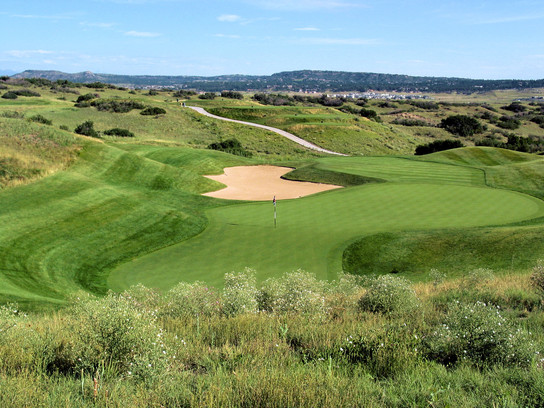 The par-3 3rd at Red Hawk Ridge sits in carved out bowl, a subtler version of the type of hole Jim Engh would intensify in the years following.

Going around Red Hawk Ridge you can see the ideas and embryonic elements of the shapes and playability motifs that Jim Engh would further develop in the early 2000’s at a number of nationally acclaimed courses that launched him into the upper orbit of golf architecture.

Built in 1999 in Castle Rock, just south of Denver, Red Hawk Ridge is a more modest design that loops through a rocky landscape full of ridges, gulches, long up and down slopes and low-growing scrub oak that border fairways like Colorado’s version of gorse. It’s a good property marred by a housing development, but there’s enough action on the ground to keep your eyes on the golf.

The holes are built with early versions of Engh’s patented “muscle” bunkers, oblong greens with rolling tiers and bowls, enormous width in the fairways and heroic set-ups on tee shots and approaches. It’s all here, just less intense than the versions that define places like The Club at Redland Mesa, The Club at Black Rock, The Creek Club in Georgia, or for that matter, Fossil Trace up the road in Golden. 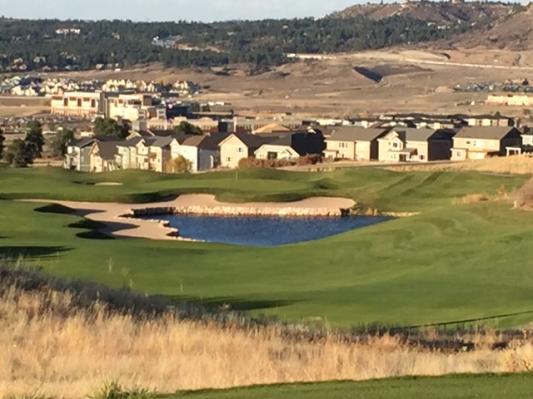 This photo of the gambler’s delight par-5 18th is an almost perfect summation of Colorado Front Range golf.

I’ve never really liked the way Engh’s courses look with all the rounded edges and obvious, artificial shaping, but playing them can be thrilling. Once you accept that there are two parts to every shot–the ball in the air and the ball on the ground–it’s hard to dislike the combination of thoughtfulness and fun intrinsic in the shots. Thinking through each putt and landing area to analyze how all the slopes will move the ball to the hole is what golf should be about.

There’s less of this at Red Hawk Ridge than at Engh’s other designs, but there are standout moments including the par-3 3rd carved into a deep bowl with a sunken back tier, the risk-reward short uphill par-4 8th and the downhill 10th where the pin placement on the angled green should dictate how and where to lay up short of a dry creek bed crossing.

The long par-3 14th is stunning, dropping 80-feet to a green perched over a ravine, but I can’t fathom why the same buckshot bunkering pattern exists at two different one-shotters, the 6th and 17th, each with similar right to left angled greens.

Engh’s courses tend to polarize players, and this one’s a little bit of a conundrum. If you don’t usually like all the heavy shaping and cupping, you might accept Red Hawk Ridge because there’s less of it here than elsewhere. If you do like these features, you might not like this one as much because it doesn’t go far enough. (87)

The shaping and bunker styles will either attract or repel — there is seldom much room between.