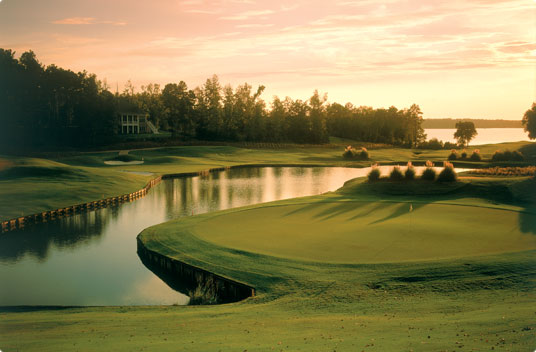 Reynolds Landing’s second green, as well as the awkwardly wedged in third green beyond it.

The Landing (née Port Armor, née Reynolds Landing), was the first course built on Lake Oconee in Central Georgia in the mid-1980’s, and for a while Bob Cupp had the only two courses on the lake when he followed it a few years later with The Preserve (née the Plantation course) at Reynolds Lake Oconee (née Reynolds Plantation). Acquired in 2009, The Landing now one of six courses at the large resort development.

You wouldn’t say the course rests lightly on the land. It was an ambitious design with an underlying muscularity in the construction and comes festooned with broad, shelved fairways and typically small, highly shaped greens. What it does have is variety, largely owing to the lovely property. Most holes have individual character and use a backdrop of wooded slopes, the lake’s shore and Cupp’s aggressive shaping to mostly positive results. 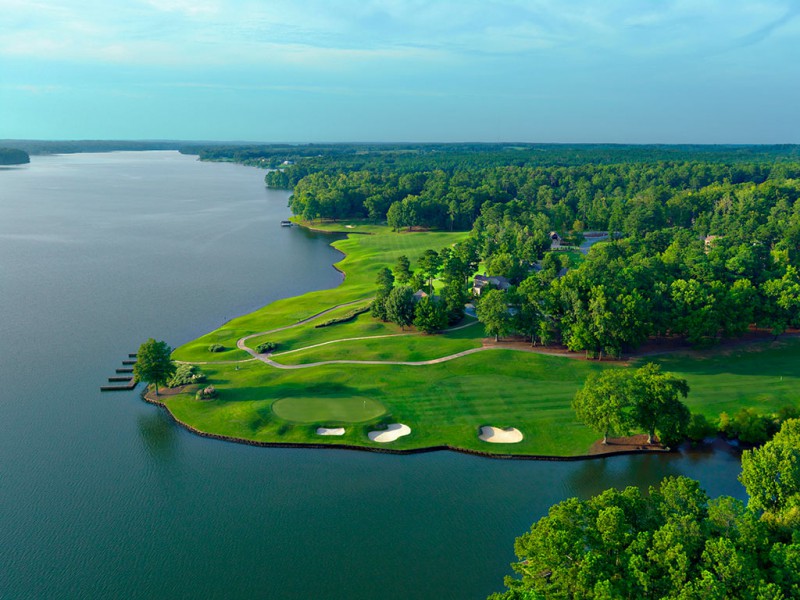 The 4th and 5th hole hug the shoreline. The short 5th is especially strong, with a delicate approach over a small inlet to a narrow green.

There’s one awkward moment as the out nine works its way toward the lake, with the blink-and-you’ll-miss-it 137-yard 3rd hole doubling back across a pond and barely fitting in the space between the 2nd green and the 4th tee. The 457-yard 4th helps make amends, however, tumbling gracefully down toward the shoreline. The short par-4 5th plays tightly along the lake with a nerve-wracking pitch over an inlet to a tiny green that seems to hover over the water.

The second nine begins with maybe the best four-hole stretch on Lake Oconee. The current 10th (which replaced a weaker original) climbs 467 yards toward a large exposed green. Eleven is a stout one-shotter across a valley; 12 is another 450+ yard climb through a valley toward another elevated and well-bunkered green, followed by a slender 371-yard par-4. The balance and rhythm is commendable and helps to counter other forgetful spots like the downhill 16th and the totally unsatisfying 350-yard 18th. (86) 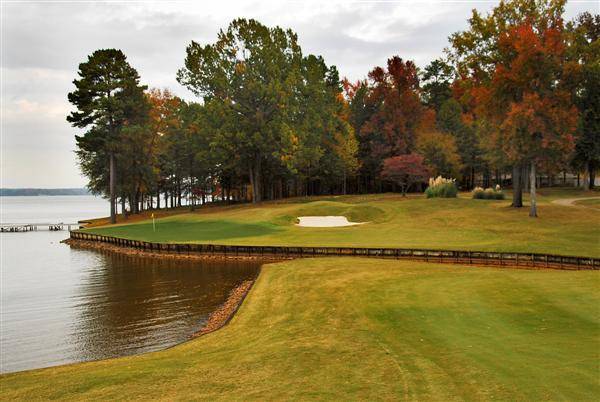 A closer look at the frightening second shot into the 5th green (photo from Blair Howard at about.com)