Osprey Cove is one of those stories we heard over and over again in the 1990’s—boy gets hot girl, boy loses hot girl, boy saunters quietly off into middle age. 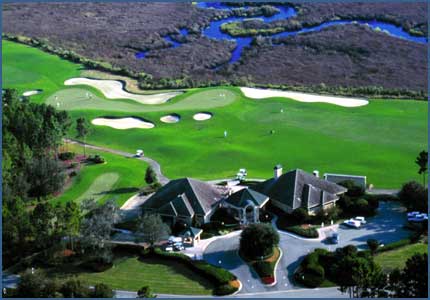 In this case, a new golf course begins receiving press and praise in all the magazines. Its reputation continues to float along largely on the strength of a trademark photograph, here a mouthwatering aerial showing the 9th and 18th holes flowing into each other along the crescent of a vast river marsh. Expectations remain high—one magazine instructs to play it if within 100 miles—and it even flashes briefly on some Top 100 lists. Then, invariably, the press moves onto the next new “it” design, the course realizes it was probably playing out of its league, and everyone settles into their more comfortable, appropriate places.

Nevertheless I still got suckered. When I moved to the Southeast, Osprey Cove was one of the first courses I couldn’t wait to play. Aw well, fool me once. 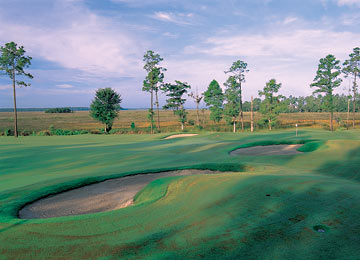 Stunning marsh views, like here at the 8th, are Osprey Cove’s strong suit.

The low-profile design circles through a development set back in a deep, coastal wood. The beginning holes are pretty terrible starting with two straight-away par fours straddling either side of the driving range that should have, at the very least, been routed in reverse in order to eliminate the long walk/ride to the third. That hole is a clumsy par five with a wetland bisecting the fairway forcing most players to club down off the tee.

The rest of out nine spins through the development with long gaps between the holes before emerging, at last, on the open marshes and creeks of the St. Mary’s River at the eighth hole. The second nine is more of the same with three more attractive marsh-side holes, although you might enjoy them more from the clubhouse with a drink in your hand as they lack the strategic interest to match the views.

In fairness, the par five 18th is a good driving hole. If you want to give it a whack in two (it’s only 500 yards from the back tees) you’ve got to cut across more of the marsh and thread the drive through the narrowest part of the fairway. But the double green is out of date and the shallow, flat-bottomed bunkers here and throughout the course don’t pose enough of a threat to really impact either your thoughts or the outcome of your shots. [Note: I have not seen Osprey Cove since a renovation in 2005 that enlarged and resurfaced the greens.] (84)