Getting near the pin at the short par 3 16th is complicatd by wind, lack of depth and multiple green levels.

You could say Ponte Vedra Inn & Club’s Ocean Course had been remolded, revamped and re-mended so many times over the years—by Robert Trent Jones, Robert Walker, possibly Joe Lee, grounds crews and who knows who else—that it ended up an utterly broken mess.

The course’s popularity peaked in the 1930’s when was considered one of the toughest and best courses in America and selected to host the 1939 Ryder Cup (which was never played). For the next 60 years, inexplicably considering its standing, the resort continually softened and modernized the design.

The changes narrowed the course, shrunk the greens, turned the bunkers into lifeless blobs and removed a lot of the golf that actually aided the high handicap player and entertained better ones. (A second, shorter Lagoon Course was built in stages beginning in 1961).

Bobby Weed’s 1999 renovation–some of his best restorative work–returned much of what was lost to the Ocean Course. It looks and plays like it was cut from Golden Era cloth with ample width to handle the site’s coastal winds and a return to an engineered, grassed-down bunker shaping that Herbert Strong would have recognized.

The best greens are angled up against bunkers and water hazards–the par-4 2nd, par-5 3rd, par-3 12th and par-5 14th come to mind–with severe split level putting surfaces that would have been normal for 1938 green speeds. The par-3 16th, for instance, is just 131 yards long, but protected by a canal, ocean winds and a shallow green with about four different interior levels, it’s all you can handle. 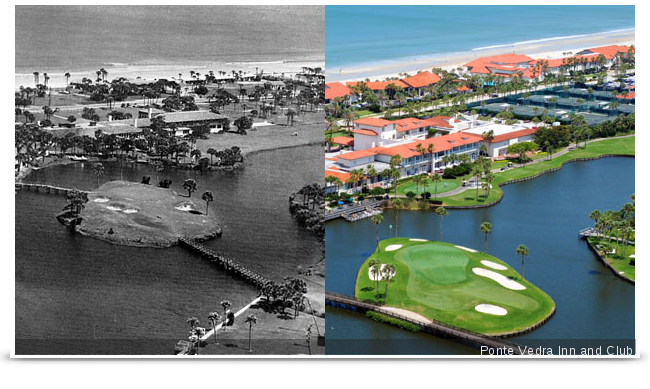 The holes runs north-south on both sides of the aforementioned canal (called Lake Vedra now), created by Strong during construction. A run of forgettable inland holes away from Highway A1A and the coastal breezes mars the first nine, but the entire home half is a winner, especially when it forges into a more isolated patch of nature at the north side of the property from holes 12 through 15.

The broad 3rd and 17th holes—each southward running and featuring centerline bunkers staggered from tee to green and big, elevated putting surfaces—are strategic jewels, and the tempting little 308-yard 10th (from the back tees), bending ever so gradually along a cove of the canal and reachable with driver in season, is not far behind. (91)

Architect: Herbert Strong; renovated by Robert Trent Jones in 1947, and Bobby Weed in 1999