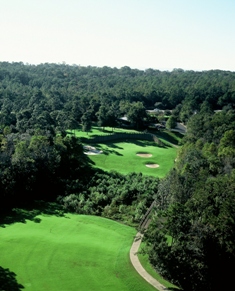 The wild second hole has a little of everything.

This development course southeast of Mobile is less than a mile inland from Mobile Bay, but it might as well be in the mountains north of Birmingham. The land is quite hilly creating some adventurous up and down shots as the two nines circle out casually through homes and thick tree corridors. This is a nice, mature public courses with just enough movement to hold your attention, though the overall design is missing any memorable personality.

Five holes cut across Rock Creek and its deep, wooded drainage basin. The two one-shot holes on the second nine are particularly strong at 197 and 187 yards respectively, each playing across ravines to greens benched into the opposite hillside, but most players will remember the second hole, a long par four that tumbles wildly downhill, cuts across the creek, then climbs up to a terraced green backed by a high wall of vertical wooden bulkheads. (83)