This was the password that needed utterance in order to gain access through the virtually unmarked door on a rather seedy-looking corner in San Francisco’s Tenderloin district. The door cracked. A friend who was heading our party leaned in toward the opening. “Know your…onions?” 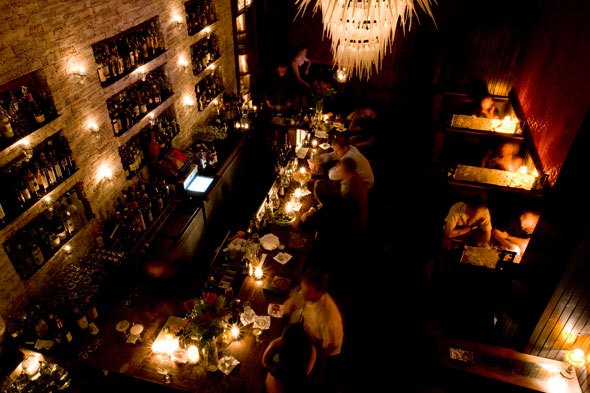 We were at Bourbon & Branch, one of the forbearers of the current movement of retro-cocktail establishments. Nowadays it’s not difficult to find bars that specialize in making classic cocktails, where bartenders spin off Prohibition-era recipes (and maybe even don Prohibition era duds) paying as close attention to preparation and methodology as they do ingredients. Just about every sizable city has one or two or ten, and even at restaurants now you can expect the person behind the bar to be proficient at concocting an accurate Aviation or Millionaire Cocktail.

But Bourbon & Branch remains one of the best in no small part to its pioneering balance of innovation and authenticity. The drink menu is lengthy, with historic and new concoctions mixed from mindfully sourced liquors and aromatics. The different nooks and rooms scream “speakeasy” with paneled woods, brick and textured wallpapers along with dark, lantern-lit booths and tables that make you feel like you’re indulging in something just beneath the bright surface of legality.

In an environment of joblessness, nervous stock markets and an intangible haze of hovering dread, perhaps it’s pretentious to make folks get a reservation for a proper drink. Then again, it’s that password that opens that unmarked door to a hidden world where the drinks are in fact proper and the atmosphere is an escape from everything on the other side of it. “Know your onions.”

One Response to “Bourbon & Branch”