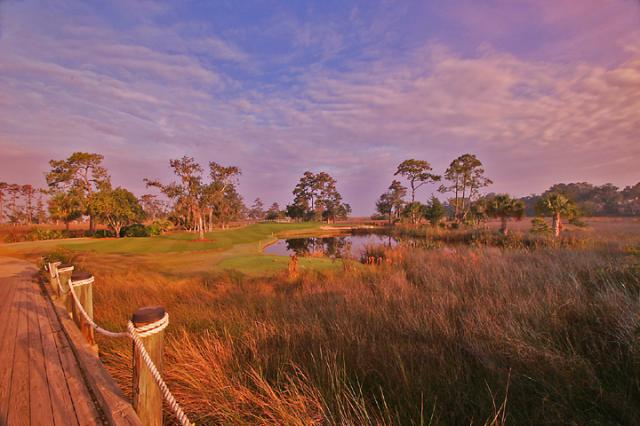 Four of The Hampton Club’s holes are build on an island in the middle of a vast tidal marsh.

The short review of The Hampton Club, out at the north tip of St. Simons Island and owned by The King & Prince Beach Resort, is 14 exercises in rather ordinary Lowcountry-style golf interrupted by an out-of-the-ordinary four-hole foray into a large Intracoastal marsh.

The longer version is that the inland holes, tightly bordered by homes and the island’s dense pine forests, do have a few standout moments like the par-5 3rd that curves out along the edge of the waterway. And the marquee marsh holes that circle a small island a couple hundred yards off the mainland, and connected by a series of bridges, are scenic even if they don’t have quite enough space to move effectively.

The biggest criticism is that too many par-4’s look and play alike—all but three are between 365 and 390 yards. The 16th has a water feature that crosses at an angle in front of the green, but at just 357 yards the approach is too short for it to really pose a serious strategic threat. 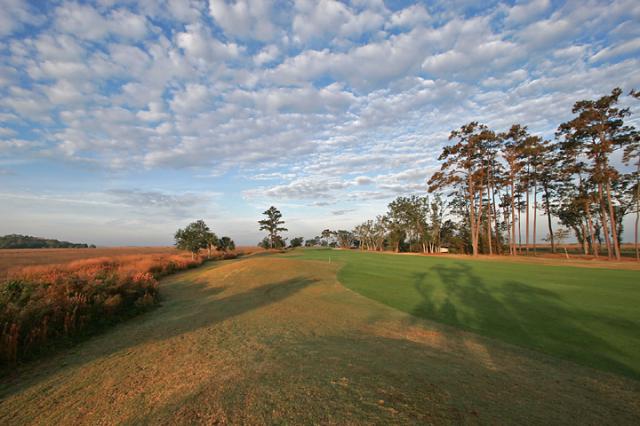 The McKay River marshes run tight along the left side of the par 4 13th.

Joe Lee’s bunkering is also repetitive (that’s nothing new), many holes are exceedingly narrow and others are just awkward (the par-4 9th bends 90-degrees around a lake). The routing is also disjointed (to accommodate housing), especially getting out to the marsh holes and back, but since everyone here rides in carts I doubt they mind much. [Note: A renovation by Billy Fuller that I have not yet seen took place in 2009 that included the rebuilding of all 18 greens, many of the bunkers, re-grassing the holes as well as various other infrastructural improvements.] (84)