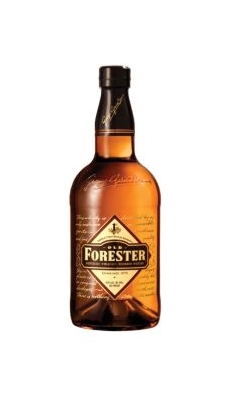 There are so many reinvented and boutique bourbons on the market today that it’s occasionally refreshing to revisit one of Kentucky’s old fashioned money-makers. Brands like Old Taylor, Old Fitzgerald, Old Charter, Early Times and the like largely defined bourbon drinking in the 1950’s and ‘60’s, and tasting them is like stepping back into another era. Find a quart of Old Kentucky Tavern, for instance, pour a few fingers in a tumbler, and you suddenly feel like breaking out the Lucky Strikes, slipping into a slim-fitting suit and tie and discussing advertising in a well-lit upper floor office.

They were never the best whiskeys on the market but they still deliver admirable servings of alcohol and nostalgia as long you’re willing to step into character. Old Forester is part of this heritage as well, one of the whiskey warhorses of yesteryear, a bottle in every cupboard.

In fairness it probably no longer deserves to be compared side-by-side to the aforementioned bourbons—it’s better. Furthermore, the Old Forester label is producing some truly remarkable and decidedly upper class modern bourbons today including the Signature and the annual Birthday Bourbons.

The original 86-proofer, meanwhile (I can’t vouch if the whiskey has changed much over the decades), comes on with fruitcake and sort of a lean ginger briary characteristic. I get a whiff of bubble gum like I do in the Birthday Bourbons (from the new oak), cinnamon and spearmint as well as potpourri spice.

There’s an interesting juxtaposition between these keen flavors and a certain viscosity that wants to break through against the rough, almost searing mouthfeel. In reality the Old Forester is more like Dick Whitman than Don Draper. There’s something intriguing going on above the surface, but deep down it can’t shake its old Kentucky roots.