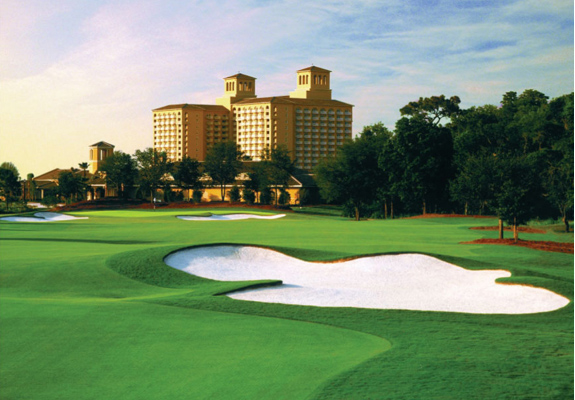 At first glance it might look like Team Norman mailed this one in. There doesn’t appear to be much to the course, especially compared to the size and pedigree of the Ritz-Carlton and J.W. Marriott that overlook it. Granted, Norman didn’t have great material to work with–basically a flat, soggy wetland preserve in south Orlando’s Shingle Creek basin–but everything you’re used to seeing from Norman predictably shows up. There are the low, slinky holes. There are the wall-to-wall fairway cuts. Over there the coral-colored crushed coquina transition bunkers/cart paths. The sharply edged bunkers are lined with Augusta-white sand. The push-up style greens are waxed from the edges into the fairways. 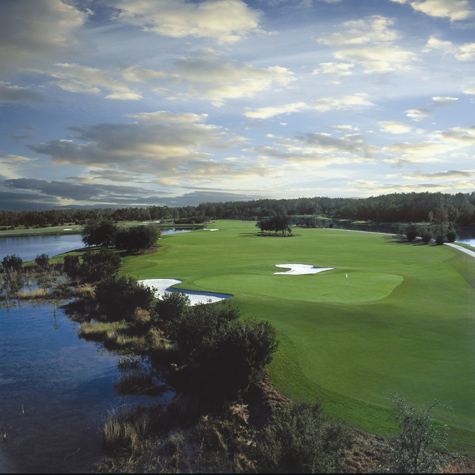 Upon closer inspection, however, there’s a methodology here I respect. The fairways encourage you to drive the ball as far as you can into their meatiest parts, but from these safe positions it’s nerve-wracking to hit approaches into the narrow greens that are positioned uncomfortably close to, and often slope toward, water hazards, bunkers or steep drop-offs. The trick works nicely on the three-shot holes as well as on the heartier par fours. Overall, there’s a lot to consider with green angles and hazard placement.

The second nine highlight is the 410-yard 11th, the second in a run of four very good holes. The fairway is as wide as the Universal Studios parking lot but a tree cluster in the center of the fairway act as a hockey goalie coming out of the net to take away the shooter’s angle. The easier drive is over a short bunker to the right, or you can be brave and try to squeeze one up the left along the lake to open up a clear path to the putting surface.

The total experience could have been enhanced had the course been sequenced in reverse, with the opening holes stretching out through bare space to the north of the resort near two busy parkways, then taking a kind of Heart of Darkness journey through the property’s murky, jungle interior. As it is the round limps home and the exposed 18th hole, stretching abreast a water feature opposite all the sunbathing hotel guests, is a deal killer. (86) 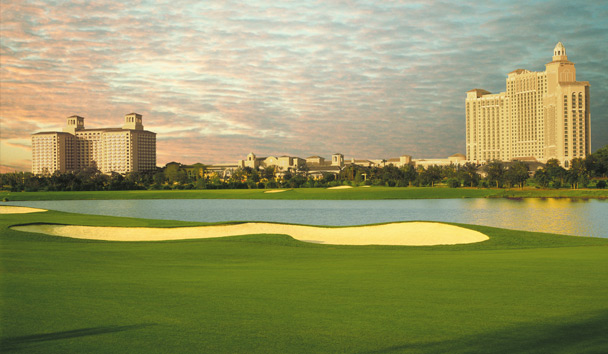