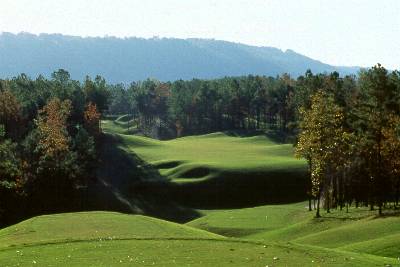 The landscape of Oxmoor Valley’s Ridge Course offers almost no angle of repose.

Some elements of the Ridge Course at Oxmoor Valley in southeast Birmingham are fairly outrageous. I think of the first and second holes (formerly the 10th and 11th, a par-4 followed by a par-5, one going uphill, the other downhill) that are so steep they’re like playing on a life size Q-bert pyramid where the only place a ball can come to rest is on small steps and ledges in the fairway.

That’s the way it is here: relentlessly up and down with enormous bucking fairways. The Ridge plays on the east side of Little Shades Mountain dropping a total of 200 feet, with 17 and 18 tightwalking the ridgeline back to the clubhouse along the property’s highest point.

You won’t forget the par-5’s–or maybe you will, with therapy. After the 2nd hole, the 3rd delves through a low basin to a green perched atop a sheer-faced shale outcropping. The huge 18th requires a third shot to a high, shallow green perched over a ravine.

The 12th offers a lower, alternate fairway to the left of the bigger upper fairway that in theory shortens the hole. But like many alternate fairway holes, the risk (it’s narrow; you can be blocked out by pines) is out of proportion with the reward and most players play to the only slightly longer higher ground. 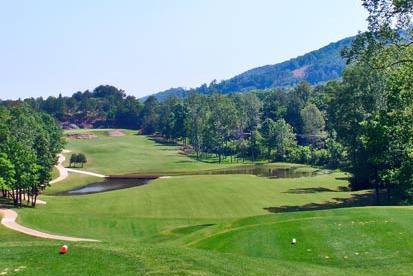 Taking advantage of the natural assets, the green at the par three third is perched distantly atop a shale outcropping.

Oxmoor Valley is indicative of all the RTJ Trail courses—epic in scale, outsize in personality and features—and I understand those who don’t care for the extroversion. To me it’s like jammy, high alcohol, Russian River Valley zinfandels: old world palates aren’t impressed and they’re tough to match with food, but damn if they’re not entertaining one-offs. (88)