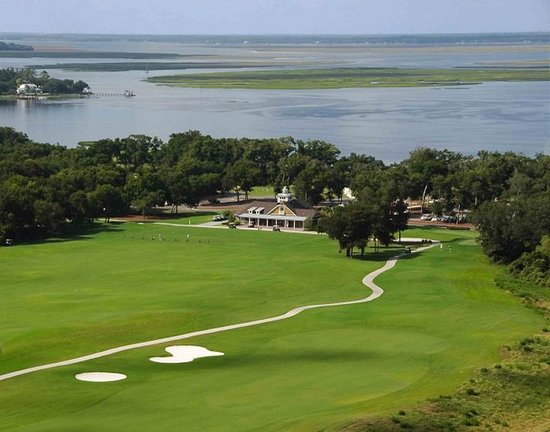 Amelia River is set near the banks of the Intracoastal Waterway, though only the clubhouse comes near it.

You know how birds sometimes nest in odd places, taking eminent domain in an overlooked eave or post column you wouldn’t think any creature would find habitable?

Amelia River is like that bird. For its home it chose a small chunk of land wedged between a road, an inside corner of two airport runways and the marshy cove of an Intracoastal river, though only one hole has a view of it. Hey, nobody else was using it.

Amelia River hatched as the Royal Amelia Golf Links in 2000. The original owner put out a noble effort to keep this stand alone course flying before selling to Amelia Island Plantation, which later sold it again.

He also helped Tom Jackson build the course, overseeing the day-to-day construction (Jackson visited occasionally). This DIY genetics might explain the location of the property as well as the tight scale of the holes. I don’t know what the total acreage is (my guess is around 170), but it’s about the least amount possible to house a 6800-yard golf course, full driving range, clubhouse and parking. Donald Ross used to thrive at packing great golf into small quarters like this, and Jackson similarly did a great job here to make it all work.

There are really only two or three standout holes, one of which is the par five 18th. The green sits out near the banks of the Nassau River and is offset from the fairway like a dislocated foot on the end of a wounded leg. In general I like all the par fives—there’s nothing particularly strategic about them but three run straight along the two field edges of the airport and I’m predisposed to like holes that do this kind of heavy lifting. Makes me think of old links holes smoothing up to a railway line.

The island green 17th is unfortunate overkill on an otherwise honest golf course.

I’m less enthusiastic about the 370-yard 14th, a 90-degree dogleg that’s really only about 250 or 260 yards if you choose to cut directly over a lake for the green. I’m positive I don’t like the island green par three 17th. By my count this makes at least a half dozen island green holes on Florida’s First Coast, which is about five too many. (83)