For years this club was an amenity to members and guests of the General Oglethorpe Hotel, one of the grand buildings of the East Coast (designed by the old firm of Schultze & Weaver, architects of New York’s Waldorf Astoria and The Breakers in Palm Beach) that stood, and still stands, imperiously along the Wilmington River between Savannah and Tybee Island. Later it became the Sheraton Savannah Resort, and today it’s comprised of privately owned condos and has no affiliation with the golf course across the street.

The property is typically flat and breezy with the only really interesting feature an irrigation canal that was expanded several years ago to form more formidable water hazards cutting across four holes, albeit in strange locations. Around this same time the nines were flipped, a hole or two rebuilt, and several others renumbered in order to get the current configuration. 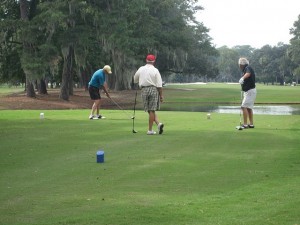 Wilmington Island Club is a simple design that manages to charm with Savannah’s Lowcountry tree cover.

Ross did a nice job of originally formatting the holes into about every square foot of space on a small, flat triangular section of land (this was probably a mail-in job he did from his desk looking at a topographical map, although there wouldn’t have been much on the map to guide him other than the property’s boundaries).

As you might imagine there’s not a lot of variation, although there are some strong holes on the second nine like the 13th, 14th and 15th, the latter of which must contend with the water.

The greens are mid-sized with mostly back-to-front contour and some rounded edges, and some very standardized bunkering protects their front thirds. There’s a certain old-time charm here but to get truly interesting golf on this site you’d really have to build up bold and detailed features, and this course just doesn’t have it.  (83)

Architect: Donald Ross/renovated by Willard Byrd in the 1960’s