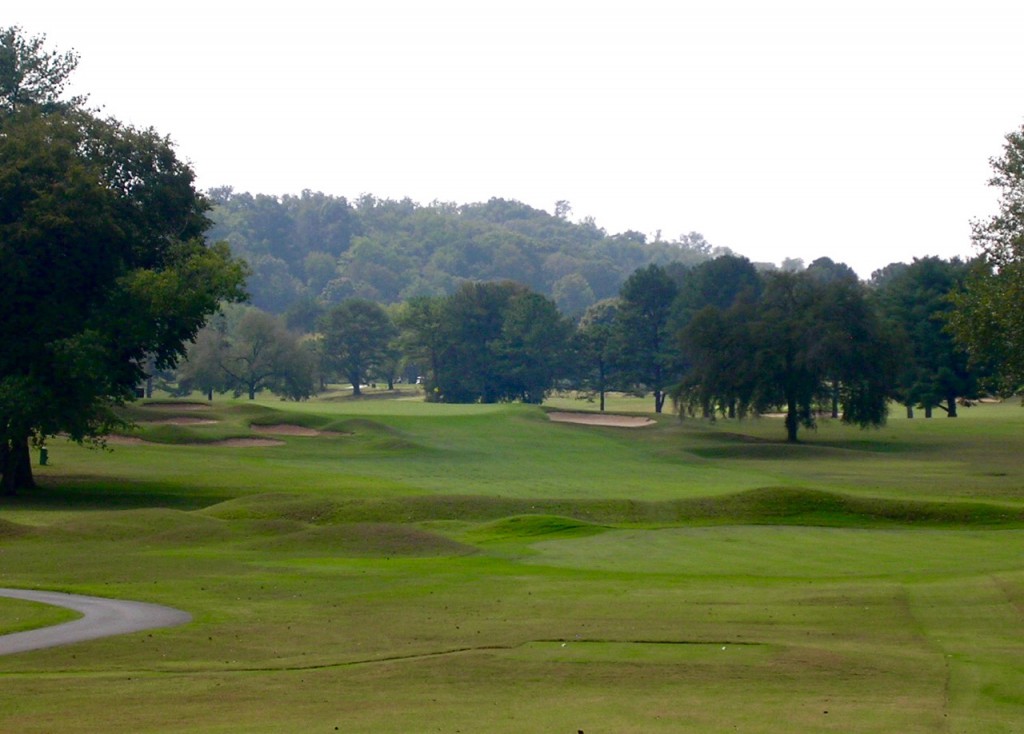 The par-4 15th is one of the most striking at Holston Hills, defined by a phalanx of bunkers strung diagonally across the fairway. This photo is prior to the club’s tree removal program, which has brilliantly opened up views across the property and allowed for the growth of meadow grass buffers.

Holston Hills has the reputation of being a Donald Ross course that time forgot because so little has supposedly changed over the years. The story is that the club, increasingly located on the “wrong” side of Knoxville and challenged to hold onto members, never had the money to unwittingly hire an architect to come in and modernize the course, as was the case with so many Ross and other Golden Age courses in the’50’s and’60’s (and later). 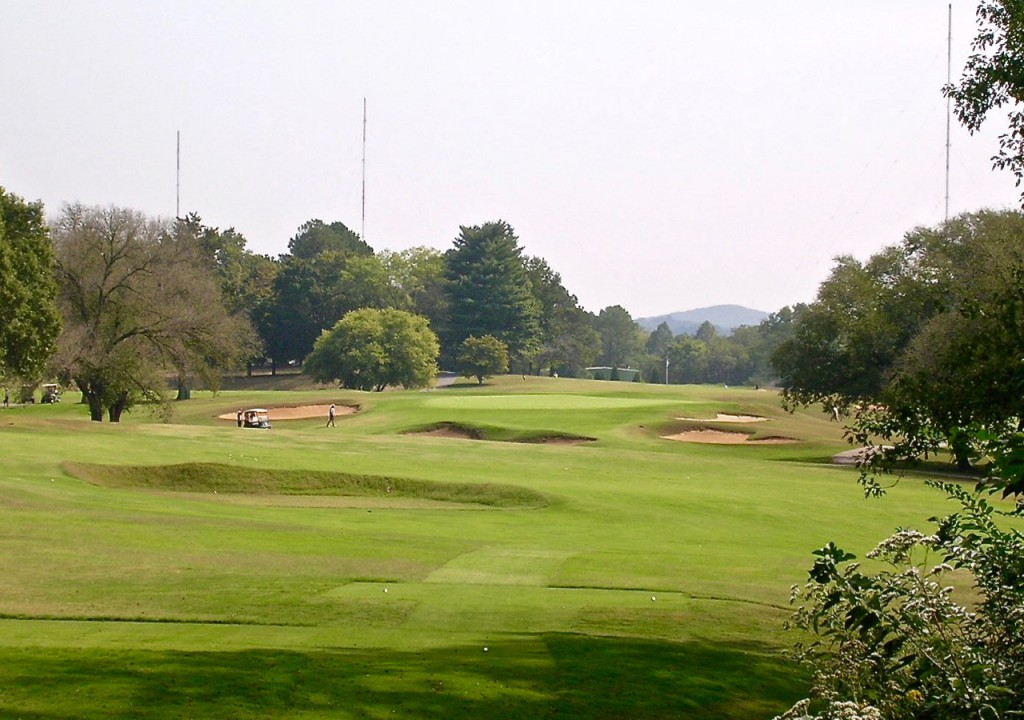 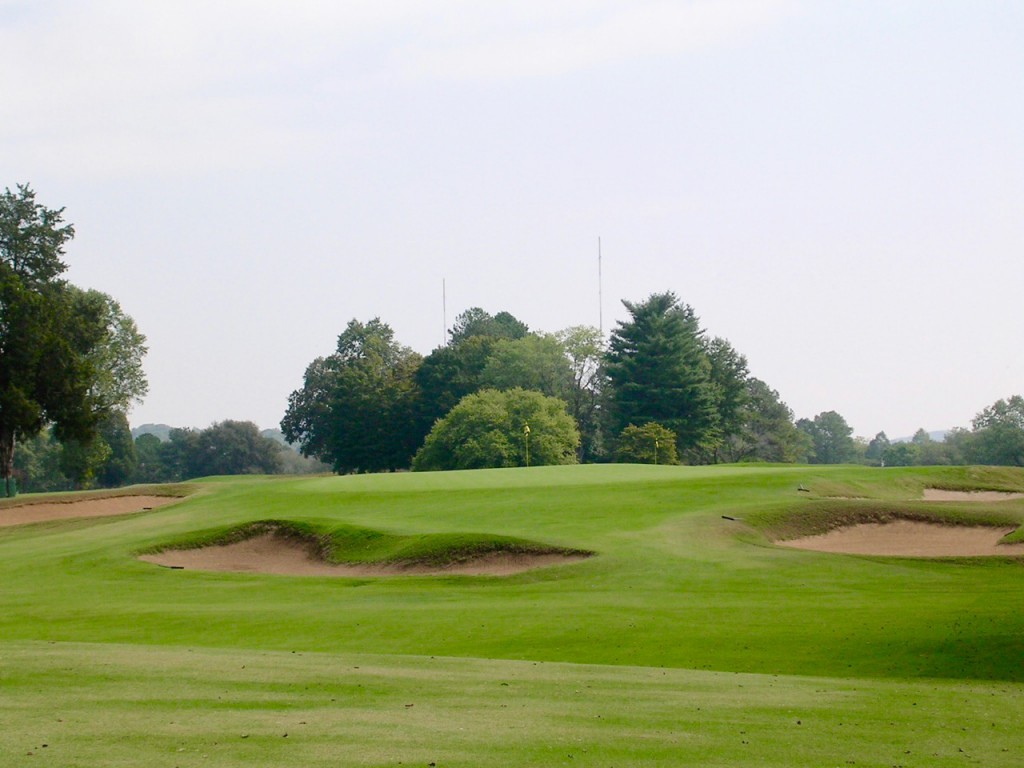 …to an uphill green sloping away on all sides.

For the most part what you see on the ground is what was there was 90 years ago, affirmed by old photos and aerials. The club survived alteration perhaps by chance (minor work has been ongoing since the mid-1990s, primarily concerned with tree removal and restoring bunkers), but once Holston Hills understood what they had, there was little chance of them allowing it to be ruined. [Note: McConnell Golf, a company that owns numerous private golf venues throughout the Southeast, purchased the club in 2016. We hope they continue to honor the course’s preserved heritage.] 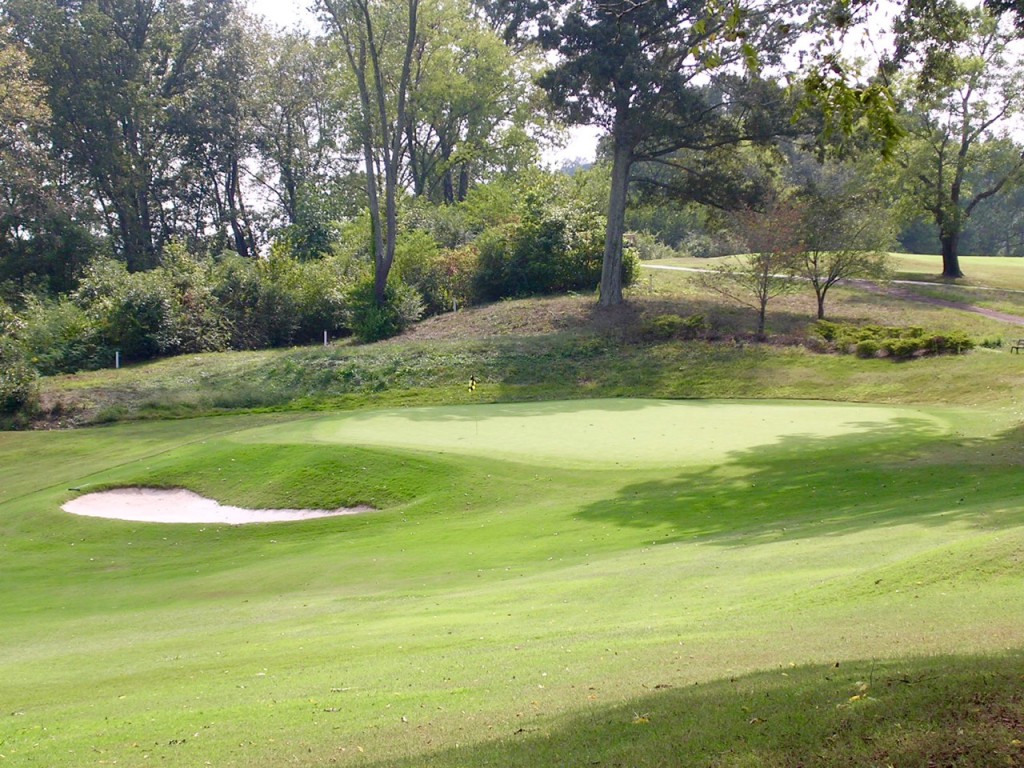 The small green at the par-3 14th, cut into the bank of a shady glade, is one of the swiftest and most tilted on the course.

The opening and closing holes of each nine run up and back over a mildly tilting incline beneath the elevated clubhouse. The ground is more nuanced — and interesting — at the flanks of the property, with the eastern side flaring up toward a ridge at the boundary and a ravine cutting through the center on the western half. Ross, naturally, sniffed out these areas for green sites along with some nice higher ground on the south side for the 7th and 8th greens. 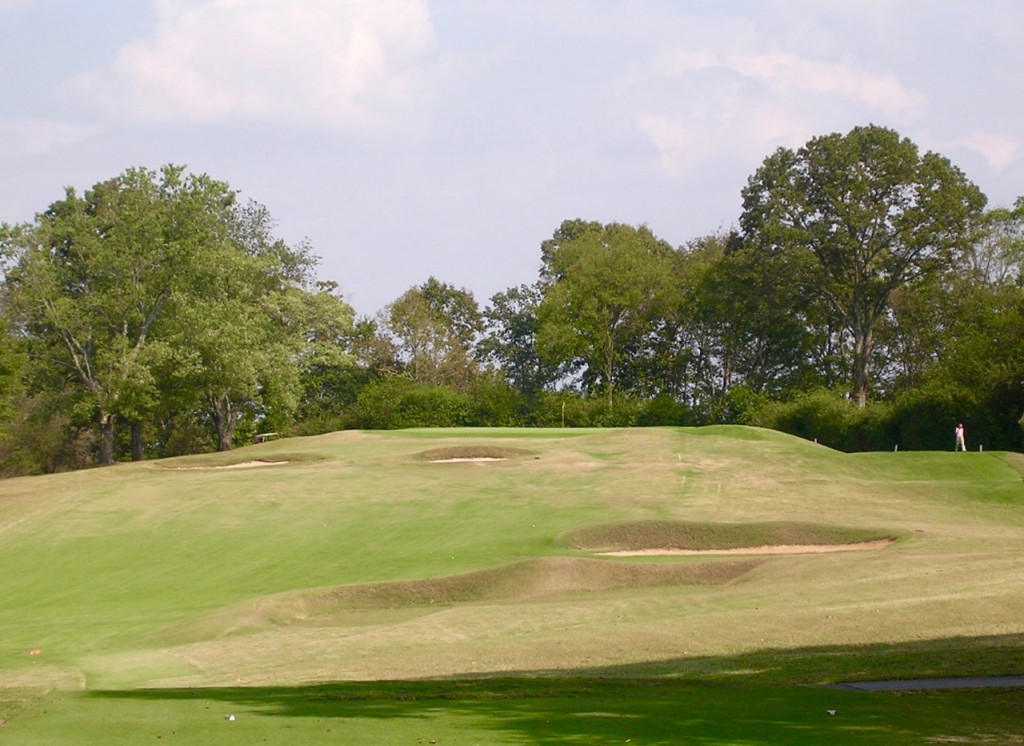 The par-4 16th, just 300 yards, outpunches its weight, with an uphill drive and a feisty pitch to a blind, crowned green.

These landforms, and bunkers cut into upslopes, give the holes a sense of motion that’s more obvious from fairway than the tee. You learn driving diagonally across to the par-4 2nd’s hogback fairway that you’re playing along the ground as much as through the air, and the realization continues at the 3rd where the fairway drops into the ravine past a cluster of fairway bunkers leaving a blind, uphill approach to a sloping green. The all-star 6th is Holston Hills defined, a short par-4 with a heavily canted fairway that drops then rises toward a plateau green.

The 13th begins another stretch that uses a ridge, a hollow and a knob of hill to inspired effect, capped by the 306-yard 16th running up a narrow slope to a slippery pitcher’s mound green (with OB right behind). 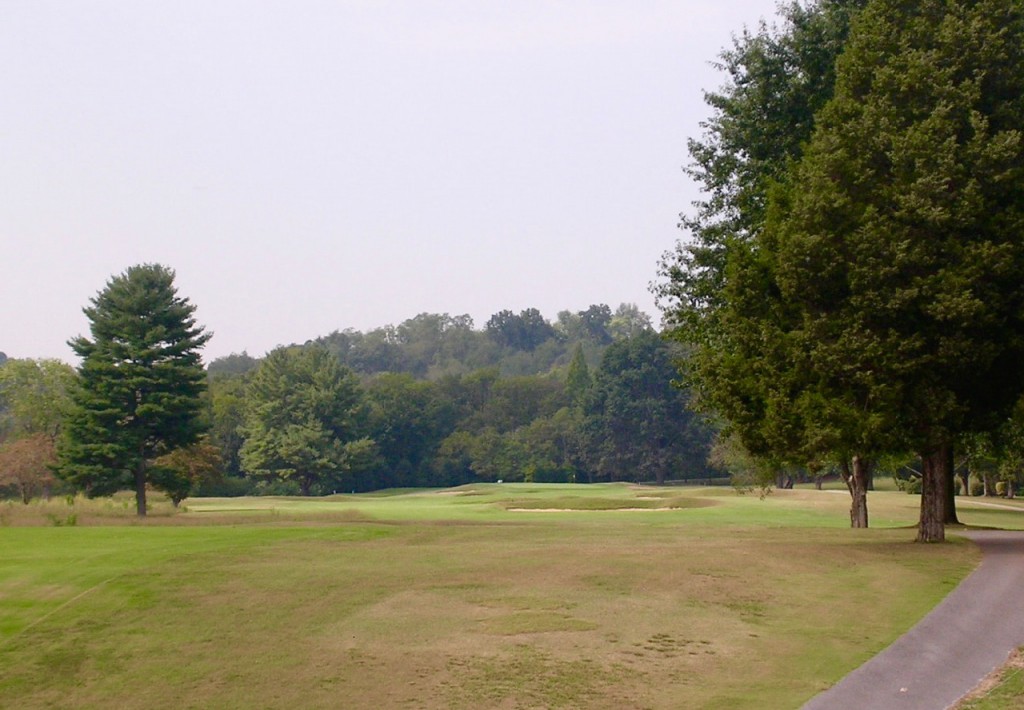 At 600 yards, the par-5 6th crosses a ravine and then traverses a long, flat stretch toward the northwest corner. Cross bunkers make the second and third shots interesting.

I’m not enamored with the back-to-back par fives that end the round; they’re probably the two least engaging holes on the course. But this club has such irresistible charm and internal logic that it hardly matters. Holston Hills is one of the best walks in the South and the moment you finish you’re ready to circle around to the 1st tee to start again. Good routings make good golf. They should, and should remain like Holston Hills, locked in time. (93) 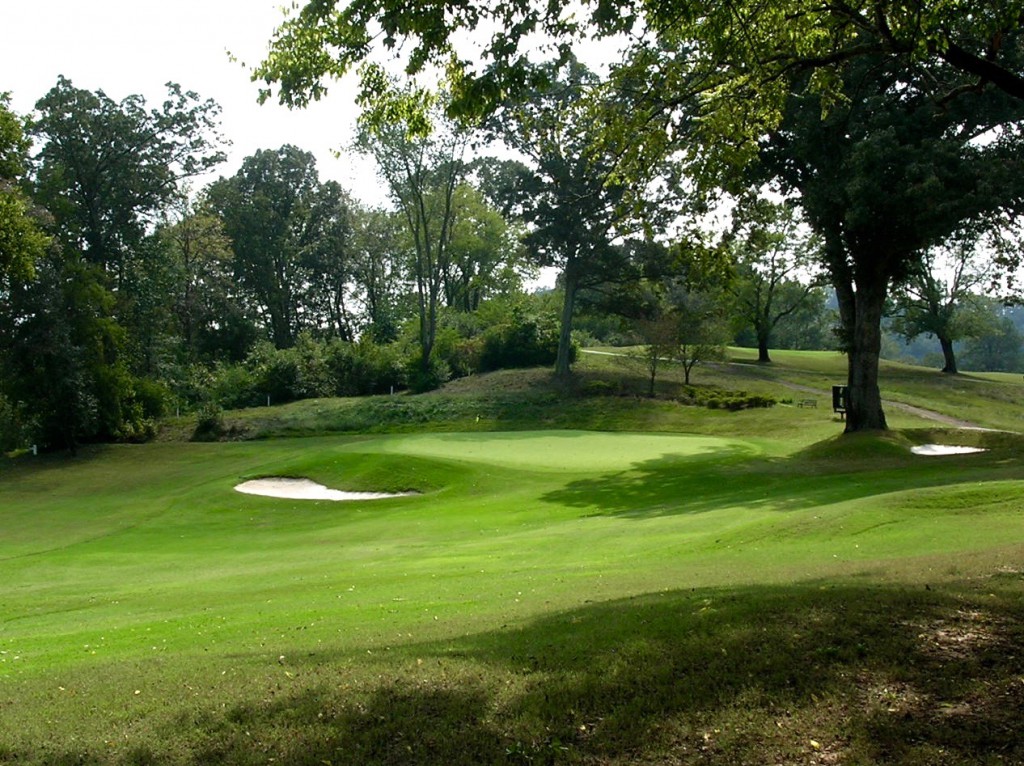