A couple times a decade, it seems, the global weather coordinates to produce great vintages from virtually every wine region around the world. Even if you didn’t know specifics, you could purchase a red from vintages like 1990, 1995, 1999 and 2005, whether Bordeaux, California cabernet, Italy or Burgundy, and be reasonably sure it was going to be high quality.

Though many bottles are still coming into the market, 2007 has shaped up to be one of those global vintages in which most producers were able to make very good if not outstanding wines. One region, specifically, has produced consistently profound wine in 2007: the Southern Rhone Valley in southern France.

The 2007 Chateauneuf-du-Papes—big, lusty reds made primarily from grenache and syrah grapes, though up to 13 different varietals can legally be in the mix—are ultra-ripe and will be talked about for years to come. But at prices usually ranging from $35 to over $100 a bottle, these, for must of us, are special occasion wines.

The 2007 Côtes du Rhones, however, are almost uniformly brilliant, and at a fraction of the price of Chateauneuf’s are ideal

The Côtes du Rhone is a large region in southwestern France

everyday wines. In fact, if you only buy one style of red the rest of this year, it must be Côtes du Rhone.

Made from a similar blend as Chateauneuf-du-Pape (Côtes du Rhone’s come from a much larger and varied geographic area and are made principally from grenache, as well as accent grapes like cinsault and mourvedre for spice and backbone), the 2007’s show uncommon depth and structure. These wines have open, luscious fruit and enchanting aromatics right now but its also evident they’ll age in the midterm, not something you usually ask of Côtes du Rhone.

You’ll find different styles of CDR, generally divided between classic old world producers and those who embrace new world techniques that yield more ripe, dense, even jammy styles of wine. Either way, you should get heady flavors of cassis, licorice, blackberry, black cherry, black pepper, black olive and the classic Rhone profile called garrigue, which is an intoxicating but ineffable mixture of herbs, earth and stone.

My tastes, at least in this vintage because it is so intense already, tend toward the old world style but I’m enjoying just about everything I’m trying. Some favorites that are widely available include the Delas St. Esprit, the wines of Daniel and Denis Alary, Domaine de la Janasse and Domaine Andezon (the Andezon is more new world in style). For a few dollars more the CDR’s of Domaine le Grand Bois 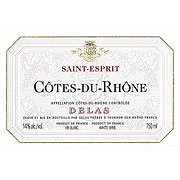 and Domaine Grand Nicolet (both from the village of Rasteau) are some of the finest reds I’ve had from anywhere in the last year. Even entry-level producers like Perrin et Fils Reserve and the Michel Chapoutier “Belleruche” have made irresistible CDR’s. Really you can’t go wrong.

I’m an inveterate shopper and like to spread my purchases and drinking as widely as possible. It’s rare that I home in on the same wine or even the same region with frequency. Not so with the 2007 Côtes du Rhones—to me it’s the best vintage in 15 years and I’m dipping into this well again and again. I plan on buying as much as I can until I can’t find them any more.