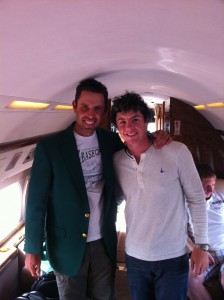 In my previous post, I expressed slight concern for Rory McIlroy’s sake that one of his accompanying passengers on the 25-hour journey from Georgia to Malaysia, who had just earned the coveted green jacket, would likely wear it right in front of Rory to keep it from being stolen from his luggage.

But as it turns out, we seem to be learning far more about Rory’s character as a result of his misfortunes on Masters Sunday, than we probably would have, had he gone ahead and broken seventy, which he likely would have had to in order to slip on his own green jacket. This is a tall order for a 21-year old leading in a major championship by four shots entering the final round.

On the plane, McIlroy arranged for a photo to be taken of him with Masters winner Charl Schwartzel that we can now see on Rory’s Twitter-account.

When asked about this ironic experience upon his arrival in Malaysia, where McIlroy will play in this week’s Maybank Malaysian Open on the European Tour, he responded: “It was fine. I’ve known Charl a long time and I’m happy for him, genuinely, he played great on Sunday. To go out and shoot 66 on the final day of the Masters to win was a great performance.”

Having endured the company of the green jacket-wearing champion, McIlroy was already looking forward to enjoying the comfort the hotel when he found that his bags had been lost by airport baggage handlers somewhere in the long chain of connecting flights. Like his Masters defeat, Rory also took this one on the chin. The BBC quotes McIlroy:  It’s one of these things. Going through so many time zones and so many connecting flights your bags are going to get lost sometimes.”

With an attitude like that, prepare to find Rory McIlroy near the top of any scoreboard. Having learned the hard way, the only thing missing from Rory’s game are his clubs.