A pretty hilarious video has been making the rounds, in which two young pranksters send a radio-controlled car–apparently named Burrita–out onto a golf course and onto the dance floor as two players of a certain age are walking up to putt.

The kids run Burrita into the players’ golf balls, are heard to be laughing hysterically, until Player A says, “Very funny–I’ll show you how funny it is,” and takes a swing with his putter, smashing Burrita on the screws, so to speak, splintering it into pieces.  At this point one of the kids come running out in outrage while the other keeps filming the whole episode, which gets even funnier as Player B takes off after the perpetrators with putter a-swinging.

The commentary out on the Interwebs has been pretty hilarious, too, and lively with profanity–and be forewarned there’s some salty language on the video, too.

While some of the discussion ranges around the nature of the video itself–is it real? is it staged? (and for my money it looks pretty real)–the rest is devoted to the question of Justice: Did Burrita get what it deserved? Most viewers are hanging judges, and express the regret that Player B didn’t catch up to the kids and deposit his putter where the sun don’t shine. Whether this means most of the viewers are golfers or not is undetermined.

I also have no information about where or when this took place, what hole the players were on and whether they were lining up putts for birdie or triple bogey. I can say that Player A’s swing looks pretty smooth as he annihilates Burrita, while it is still moving. 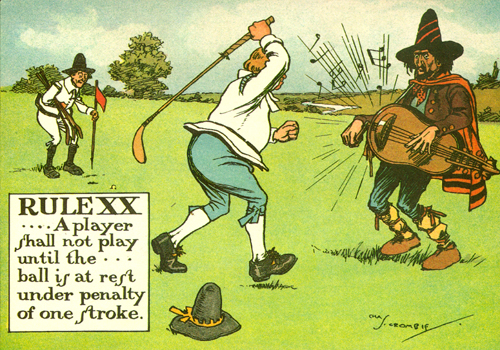 More to the point, naturally, is what should the players do once they return to the green? Here we’re on pretty solid ground. Though one ball is moved by Burrita, and shoved into the other ball, also moving it, both Burrita and the first ball can be considered outside agencies.  According to current USGA Rules of Golf, Rule 18, Ball at Rest Moved, sums it up nicely:

If a ball at rest is moved by an outside agency, there is no penalty and the ball must be replaced.

So other than cleaning up various Burrita debris on the green, catching one’s breath from chasing down far younger miscreants, waiting until one’s blood pressure retreats from explosive levels, Player A and Player B are free to pick up their game right where they left it.

I wish I could see some video of the rest of that round, too.  How many holes, I wonder, did it take for our beleaguered players to stop muttering and cursing those young whippersnappers–if anyone actually uses the word “whippersnappers” anymore–and what shape was their story in by the time they reached the pro shop and grill room bar?

We’re certainly open for comment on this one.  If anyone knows any of the five W’s and an H  (who, what, where, when, why and how?), please let us know and we’ll pass it on.

Meanwhile, don’t mess with us players of a certain age.