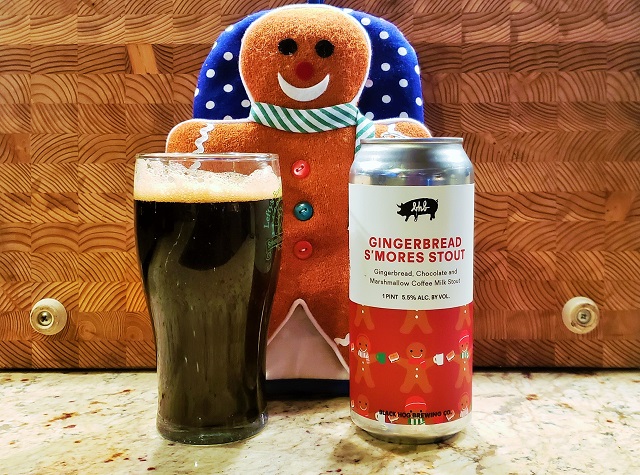 I had the tasting panel on hand for one more beer on Christmas evening, and I decided to go easy on them with a relatively low (5.5%) ABV beer. That didn’t mean it was straightforward. Any beer that attempts to suggest marshmallows suggests trouble to me. And as a milk stout with flavors of gingerbread, chocolate, coffee and marshmallows, I had some serious doubts.

On the other hand, it sure sounded Christmasy. And had I known about the background of the trio behind Black Hog Brewing I might have been less trepidatious, since they know food, and brewing.

Brothers Jason and Tom Sobocinski are serial entrepreneurs in the New Haven area with deep culinary backgrounds, having opened and operated a cheese shop, a cheese truck, a restaurant and bar. Family friend Tyler Jones had the beer chops, with a resume including stints at Mercury Brewing in Ipswich, Massachusetts, Smuttynose Brewing and Portsmouth Brewery in New Hampshire. 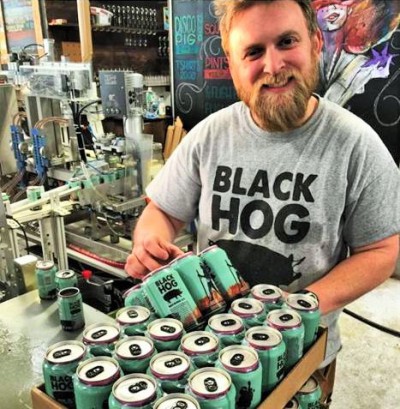 The three opened Black Hog Brewing in August 2014 and hit the ground running with some imaginative beers (Ginga’ Ninja, a red IPA made with ginger; Granola Brown Ale, and Easy Rye’Da, a low ABV rye IPA). The brewery now distributes to nine eastern states, and Jason is often out and about doing beer and cheese pairings or beer and barbecue pairings. (The brewery is apparently named for the brothers’ habit of roasting hogs as part of family celebrations.)

To cut to the chase, I was pleasantly surprised by the beer, and the rest of the panel was favorably impressed. “I’m getting white chocolate, nougat, espresso coffee bean candies. Maybe some ginger,” said my son-in-law, Glenn, himself a restaurateur (Wildwood Barbeque in Hadley, Massachusetts).

“Marshmallows for sure,” said my son, Mike. “A little like the ones you find in Lucky Charms.” “Fluffernutter,” said my daughter, Jennifer, pinch-hitting on the panel for this one. My prime sensation was a cocoa aroma, and coffee taking over in the palate.

“It’s a good beer, and not too sweet,” said Glenn. Exactly right. Not too sweet. I was thinking back to last year’s Frosted Sugar Cookie from Southern Tier Brewing. Also a well-made beer, but just too sweet for me. The Black Hog brew, not so much. And it’s impressive for how much flavor can be packed into a 5.5% ABV beer.

True, the chances are still slim that I would sidle up to bar and clamor for another Gingerbread S’mores Stout. But I did have another can on hand….