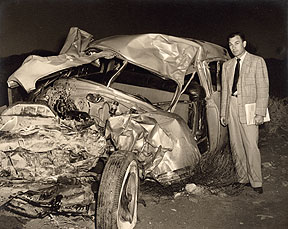 Hogan standing next to what remains of his car after the February 1949 accident.

No extended piece about Ben Hogan can go on for long without mentioning the car wreck in February of 1949 that nearly ended his life, but surely elevated the rest of his career into the stuff of legend.

Not that the Dublin, Texas native hadn’t already begun burnishing the Hogan Mystique with his play before the accident. (And has the word “mystique” ever been applied to any other golfer with such accurate regularity?)

As author David Barrett makes clear in Miracle at Merion: The Inspiring Story of Ben Hogan’s Amazing Comeback and Victory at the 1950 U.S. Open (Skyhorse Publishing, 2010, $24.95), once past his early troubles with a persistent duck hook, Hogan served notice on the tour with his first individual victory in 1940. (He had won a two-man event in 1938 with Vic Ghezzi.) He then went on to win the next two tournaments and finished the year as the leading money winner.

He took time off from the Tour in Tulsa in 1943 and 1944 as a member of the Army Air Guard, eased back into playing in 1945, and then began an astounding run of success. As Barrett puts it:

From 1946 through 1948, Hogan won 30 tournaments. If you throw in the five events he won after getting out of the Army in 1945, it adds up to a remarkable 35 wins in three-and-a-half years. Some perspective: Tom Watson and Gene Sarazen, two of the greats of the game, each won 39 events in their entire careers on the tour. 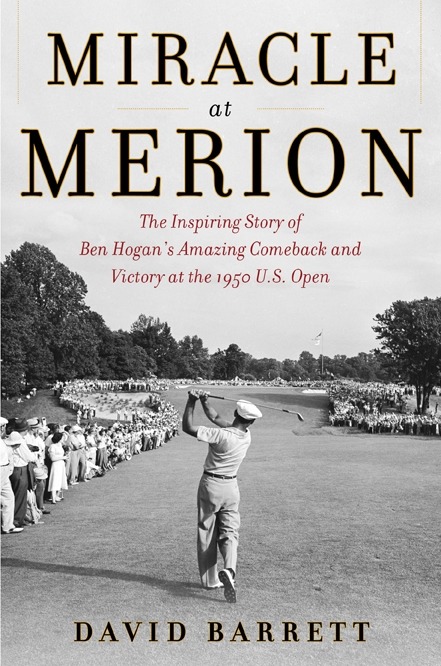 The compact golfer who became known as Bantam Ben had one of the most repeatable swings in the game’s history–and may have been, Barrett suggests, the first to talk about the notion of a repeatable swing. But part of his legend is how hard he worked at it.

“There’s no such thing as a natural golf swing,” Hogan was quoted in a Time magazine article cover story from January, 1949, an article that portrayed him as a fierce competitor with unmatched focus and desire to win, and one who unnerved his fellow players so that they were thrown off their games. (Sound like any recent model we can think of?)

The article appeared 23 days before the accident on Highway 80 in Texas, when it became apparent that a bus attempting to pass a truck in foggy weather was going to crash into their car, and Hogan threw himself across to the passenger side to protect his wife, Valerie.

It probably saved both their lives, but Hogan’s lower body was injured. But as Barrett makes clear, it was subsequent blood clots and the resultant vascular surgery that led to Hogan’s later physical ailments, rather than the broken bones themselves.

It all made Hogan’s march to victory at the 1950 Open the stuff of Hollywood, and indeed Hollywood obliged, with Glenn Ford playing him in “Follow the Sun,” what some say is one of the worst golf movies ever made (but which I have yet to see, so judgment reserved).

Barrett, at any rate, goes on to accomplish no mean feat–creating some suspense leading up the climax of an event we know the details of. But he finds more details to savor, including a brief portrait of Hy Peskin.

Who’s Hy Peskin? He was the photographer who took what may be one of the most famous sports photos of all time, but surely the most famous golf photo, of Hogan’s one-iron to the green on the 72nd hole at Merion in 1950, appropriately on the cover of the book. 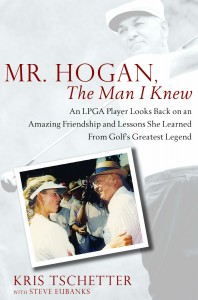 There’s also a rather remarkable photo in Mr. Hogan, The Man I Knew (Gotham Books, 2010, $22.50) by Kris Tschetter with Steve Eubanks. Tschetter is an LPGA player who came to know Hogan long after his career was over but hers was just forming.

She was attending Texas Christian University and as a talented amateur became a member at Hogan’s club, Shady Oaks in Fort Worth. One day she broke the club’s standing rule–don’t bother Mr. Hogan–and said hello as he walked by. He returned the greeting, moved on, but when he returned later and saw that Tschetter was still practicing said, “You’re still here? Keep working at it.”

For a man who practiced more than anyone before or since (until Vijay Singh came along), Hogan had an eye for stick-to-itiveness, and he became a friend and mentor to Tschetter, who went on to a fine career (one win on the LPGA Tour, and 72nd place on the all-time money list).

Her portrait is the anodyne to stories about the caustic Hogan, the Hogan with the basilisk stare, and the palpable if silent disapproval. Oh, she has some funny anecdotes about how Hogan could make anyone squirm–like pro Tom Byrum who was tardy to the range one day and had to undergo a placidly lethal interrogation from Hogan.

But mainly this is a paean to a Hogan with a quick wit, a softy at heart, and a gentleman at all times. Set in his ways, perhaps, but ways that were far more benign than those usually consigned to the legendary Wee Ice Mon.

The photo comes from a video Hogan allowed Tschetter to take of his swing in 1989, which she speculates is the last time it was so captured. The final frame of the sequence is of Hogan’s follow-through, and what’s remarkable is how similar it looks held next to the Peskin photo.

Sure, he’s not as high on his right toe, he’s not as wiry as in 1950, there’s not quite the same arch in the back. But taken about 40 years apart, the two photographs are living testimony to the repeatable swing! 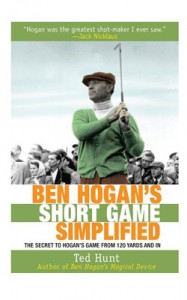 Hogan made himself into a good putter, although that skill faded as his career went on. He often differentiated golf and putting as two different games, yet it needed to be practiced as well.

One of Hogan’s oft-repeated observations was that, “There isn’t enough daylight in any day to practice all the shots you need to.” Another: “Every day you miss practicing, it takes one day longer to be good.” What’s an amateur to make of such daunting comments?

Hogan reportedly told one enquirer that the secret to golf could only be found “in the dirt,” meaning through endless practice. In his 2009 tome, Ben Hogan’s Magical Device: The Real Secret to Hogan’s Swing Finally Revealed, Ted Hunt attempted to describe what that secret really was, and he’s back with a sequel of sorts: Ben Hogan’s Short Game Simplified: The Secret to Hogan’s Game From 120 Yards and In (Skyhorse Publishing, 2010, $16.95).

Hunt is an amateur, and he goes to some lengths to defend an amateur’s writing of a golf instruction book, but he doth protest too much. For those who respond well to instruction books (I confess that I usually don’t), this covers all the bases–actually starting from the putting surface and moving to 120 yards out–with specialty shots, problem shots and plenty of Hogan anecdotes and photos to sweeten the pot. 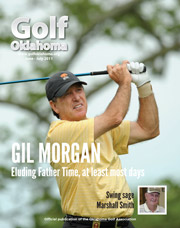 This piece first appeared, in slightly different form, in the June-July 2011 issue of Golf Oklahoma.

One Response to “Hogan Lives!”