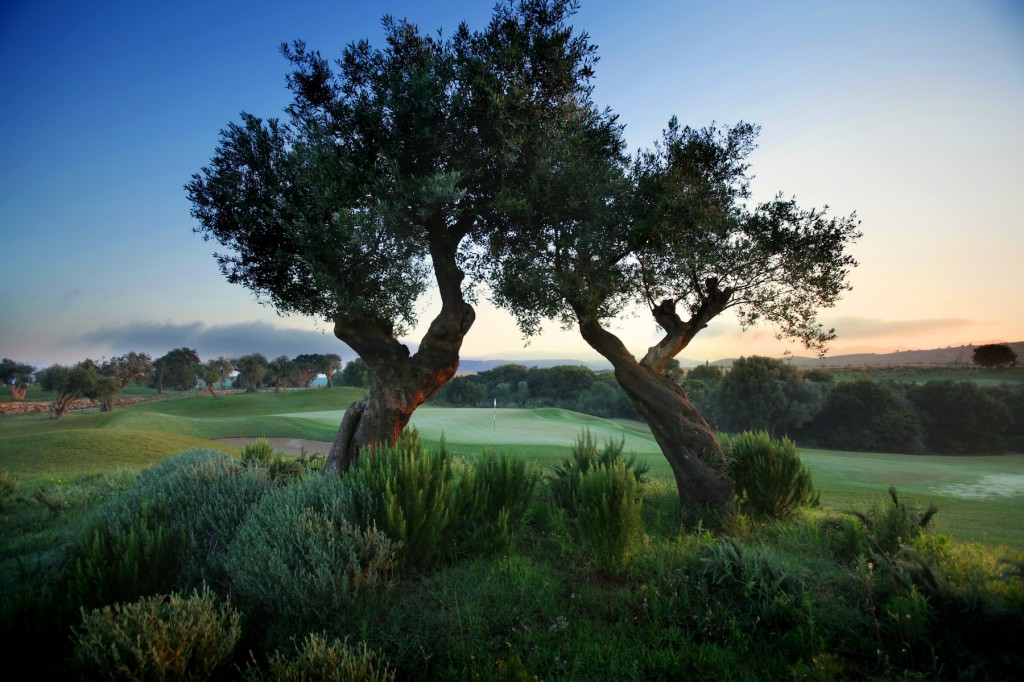 There is a statue in the National Archaeological Museum in Athens dated to about 510-500 B.C. At its base is the representation of two men, holding what look like mashies or niblicks, fussing over a round object just about the size of a Titleist. The men are not wearing collared shirts; actually, they aren’t wearing anything, which might give event organizers at Costa Navarino something to ponder. 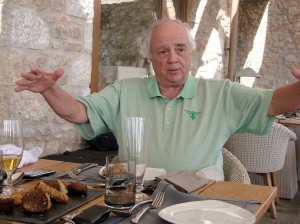 RTJ II: “A golf course that will put its arms around you and embrace you.”

There’s no question that golf at this splendid Mediterranean resort is a sensual experience. Designer Robert Trent Jones Jr. said that his newly-opened Bay Course by Navarino Bay is, “A golf course that will put its arms around you and embrace you.” And while RTJ II likes to wax poetic, he isn’t over-romanticizing here. Or even if he is, what better place to be lyrical?

Is not this the land of Nestor’s Palace, mentioned in Homer’s Odyssey, where the ancient King welcomed Telemachus with typical filoxenia–Greek for hospitality? The youth was traveling to determine the fate of his father, Odysseus, and Nestor lavishly plied him at a banquet before even asking his name. He actually plied him so lavishly that Telemachus steered clear of the palace on his return trip to avoid even further caloric filoxenia.

I know how he felt, though I would gladly return for another lunch like the one a few visitors tucked into early this past May. We had just come off the first track built at Costa Navarino, the Dunes Course, and had barely cracked open our bottles of Mythos Beer when dish after dish began arriving in Nestor-like alacrity: octopus, Greek salad, crostinis, talagani cheese, shrimp, mousaka, pita coated with tsatziki (a garlic, cucumber yogurt dip), lamb on skewers and in patties on a mound of feta. Lunch, mind you.

Conspicuous by its absence–though this was but a few days before Greece’s foreign loan agreement was to be put to the test of parliamentary elections–was any sense of economic crisis.

There was a simple enough reason for that. This luxurious southwest Peloponnese haven is a project for the long haul, financed by deep pockets and with a sense of vision for the Greek region of Messinia. That there are already two world-class hotels and two stunning golf courses at hand appears to be a mere beginning in achieving the mission of the late Vassilis Constantakopoulos. 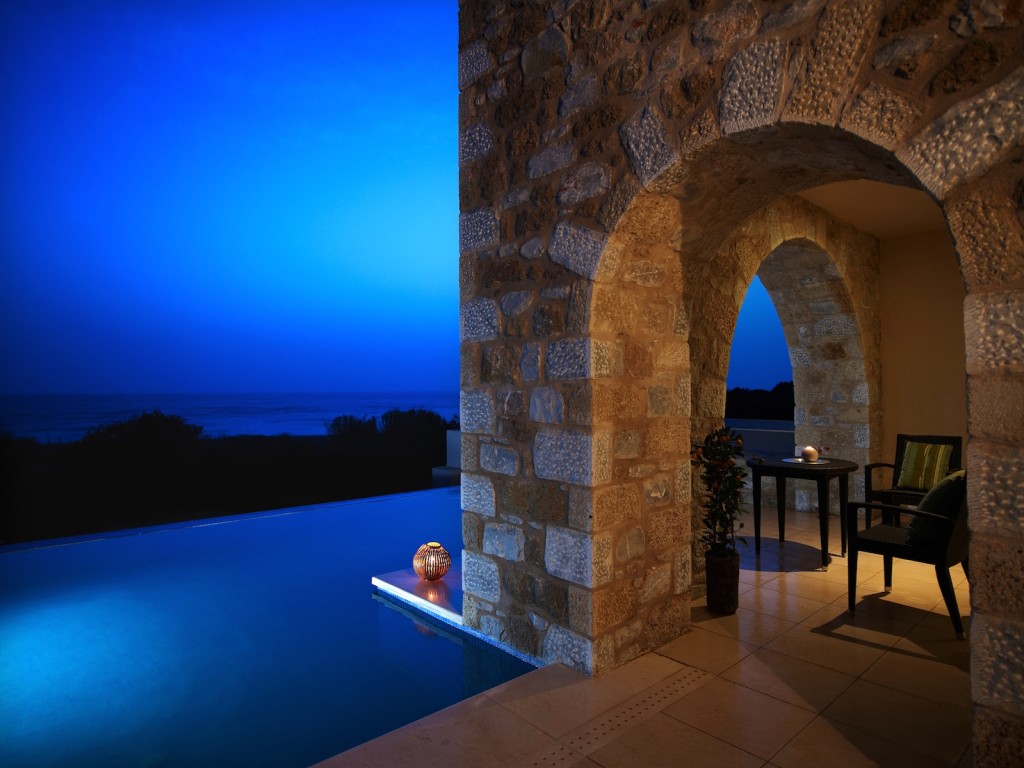 A Westin veranda at Navarino Dunes, with infinity pool

Born in Diavolitsi, Messinia in 1935, Vassilis took to the sea as a relative youth for two decades, and was forever after known as the Captain. When he returned to dry land his wife, Carmen, convinced him to take out a loan to buy a small ship, the beginning of Costamare Shipping, now one of the world’s leading container shipping firms.

That was work. But the Captain had a dream, and that was to turn Messinia into a premier tourist destination, fashioned to the strictest standards of environmental preservation. To that end, he began buying land in the early 1980’s, piecing together parcels from 1,300 different owners.

Not that everyone went along with the program. RTJ II said, “If they ever name the holes on the Bay Course, then the tenth should be Electra, or The Lady With a Knife.” During construction a landowner who had refused to sell felt the crew was coming a little too close to her olive trees. She went running toward the crew brandishing a blade. Net result: “We rerouted the hole.”

The Ancient and the Modern

Greece does not have a deep golf tradition. Play the two tracks at Costa Navarino and you’ve played about 30 percent of the nation’s courses. (There are seven.) And you will have surely played the best.

The Dunes was the first to open in May of 2010. Course and clubhouse are a short stroll from the beach fronting the two deluxe hotels, The Romanos and The Westin Resort. 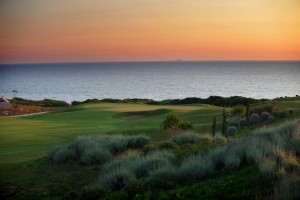 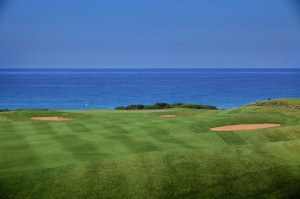 Two views of the second hole at Navarino Dunes, looking out at the Ioanian Sea.

The layout represents the third collaboration between Bernhard Langer and lead European Golf Design architect Ross McMurray (having worked together previously at Panoramica in Spain and Schloss Nippenburg in Germany.)

The curtain really comes up on the second tee, a short par-4 that heads straight for the Ionian Sea. “Club selection is critical here on the second shot,” said Cesar Burguiere, a Parisian serving as the Dunes golf operations manager. “You can’t go long here, but there’s a steep ramp in front of the green. It’s tough to hold.”

Fairways are generous and greens large to huge at the Dunes, but the movement on the greens and ample bunkering provides plenty of defense. The scenery is a weapon against par, too. The brilliant blue sky giving way to even bluer sea waters, contrasted with the green of the course is fairly intoxicating. Add temperate climate and the wafting fragrances of lavender and mimosa and one starts to feel like a lotus-eater even before lunch.

While predominately a wide-open links-like design, the Dunes has plenty of Cypress and olive trees to add complications and visual accents. The olive trees are a story in themselves. Some 4,500 of them, as well as 1,000 fruit trees, were uprooted, transferred and transplanted as part of the prevailing environmental initiatives.

This was no simple matter, as some of the trees were centuries old and weighed as much as (or more than) an elephant, over ten tons. In truth the massive root system of the trees looks a little like an elephant’s foot, and the entire project of planting the trees in their final positions about as unwieldy. And yet it was done, at an almost total success rate.

There’s more foliage and elevation changes at the Bay Course, and as Burguiere says, “They’re totally different courses. The Bay Course is funny in that it looks fairly easy. But you have to be extremely careful around the greens. And the views are breath-taking, truly amazing.”

It was a treat that RTJ II was present for the opening of the Bay Course. At our sybaritic lunch he related the connection that his maternal grandfather had been a sprinter in the 1896 Olympics in Athens. Then he mentioned “things to notice” when we played the next day: “Here at the Dunes Course the bunkers are raised and visible. Tomorrow you’ll find they’re sunken, and hidden. The greens are open and accessible, but on some you’ll want to play away from the flagsticks.

“The course is short and the fairways wide, but you may find your scores high because the course is complex. My game is chess; I like to make you think about your move before you make it.”

RTJ II tees off on the opening hole of the Bay Course.

On game day Jones played a few holes with each of our groups, explaining the strategy on this hole and that, and how the course moved through three areas of play—seaside, grove and canyon.

He also mildly complained that his routing had been temporarily changed, awaiting the completion of the clubhouse for the course.

(Although the entire project is called Costa Navarino, it is divided into various sectors—Navarino Dunes now being the most complete with the hotels, Dunes Course and a sizable village area of upscale shops, restaurants and the Anazoe Spa. The Bay Course is a short drive away in what will become the equally fecund Navarino Bay area.)

Jones was certainly not complaining about the site he had been given to work with, with numerous holes giving knockout vistas onto the bay and distant Pylos, a city both ancient (“sandy Pylos” to Homer) and still lively. 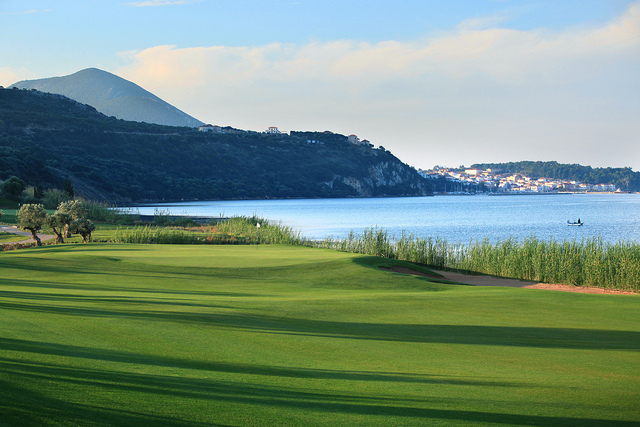 From the literal and figurative high point of the sixth green, looking back toward the Bay, the view is so lovely it’s difficult to imagine it looking, in French Admiral De Rigny’s words, “…like some lake in Hell, with sinners swimming in a sea of fire and tar.”

De Rigny was describing the 1827 Battle of Navarino, in which allied fleets from France, Britain (Admiral Codrington) and Russia (Admiral Heyden) defeated an Ottoman armada and secured independence for Greece. In Three Admirals’ Square in Pylos a monument stands to the three commanders, and on display in the lobby of The Westin are a series of artworks depicting the critical battle. 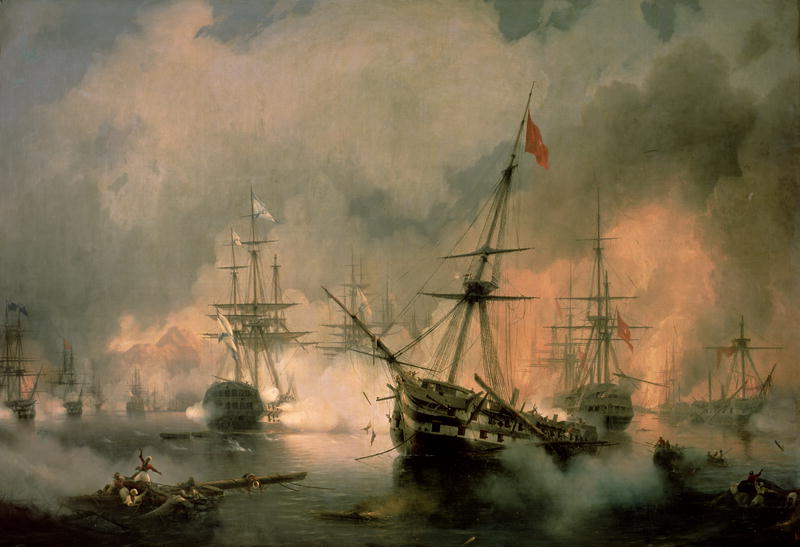 The Battle of Navarino by Ivan Konstantinovich Aivazovsky

But throughout The Westin and The Romanos are works of art and artifacts both ancient and contemporary, and the accommodations themselves are testaments to architectural élan.

Indeed, Costa Navarino is less about a quick golf getaway than about an extended seaside holiday for families, where one can take a variety of seminars that touch on Messinian culture, be it in art, dance, baking, cuisine, sea fishing, a cappella singing, mosaics, or the olive experience–from tree to table.

The idea of sustainability here extends to an in-house vineyard and winery, farm-raised foods for the restaurants and, of course, olive oil.

Whether playing around olive trees on the courses, indulging in the signature olive oil Oleotherapy at the Anazoe Spa, or carting home some of the house Navarino Eleon oil, one is only doing what comes naturally here. For Greeks, the olive is a symbol of longevity, reconciliation and the irrepressible filoxenia. 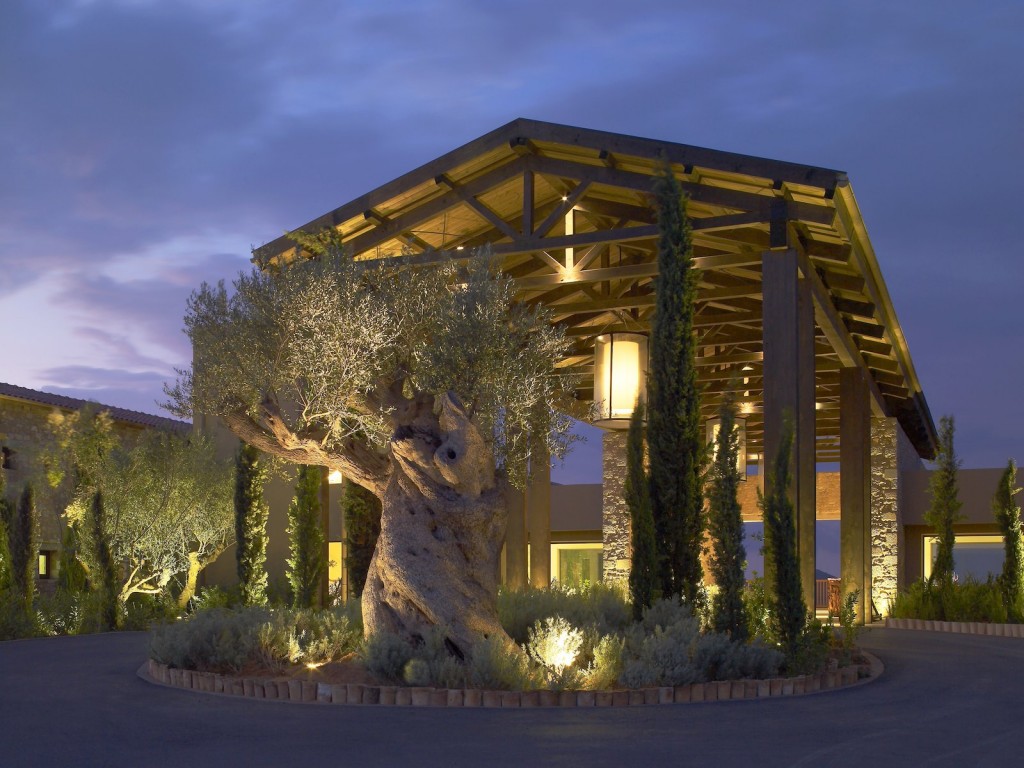 This piece first appeared in somewhat different form in the July-August 2012 issue of Troon Golf & Travel. The current issue can be viewed here.