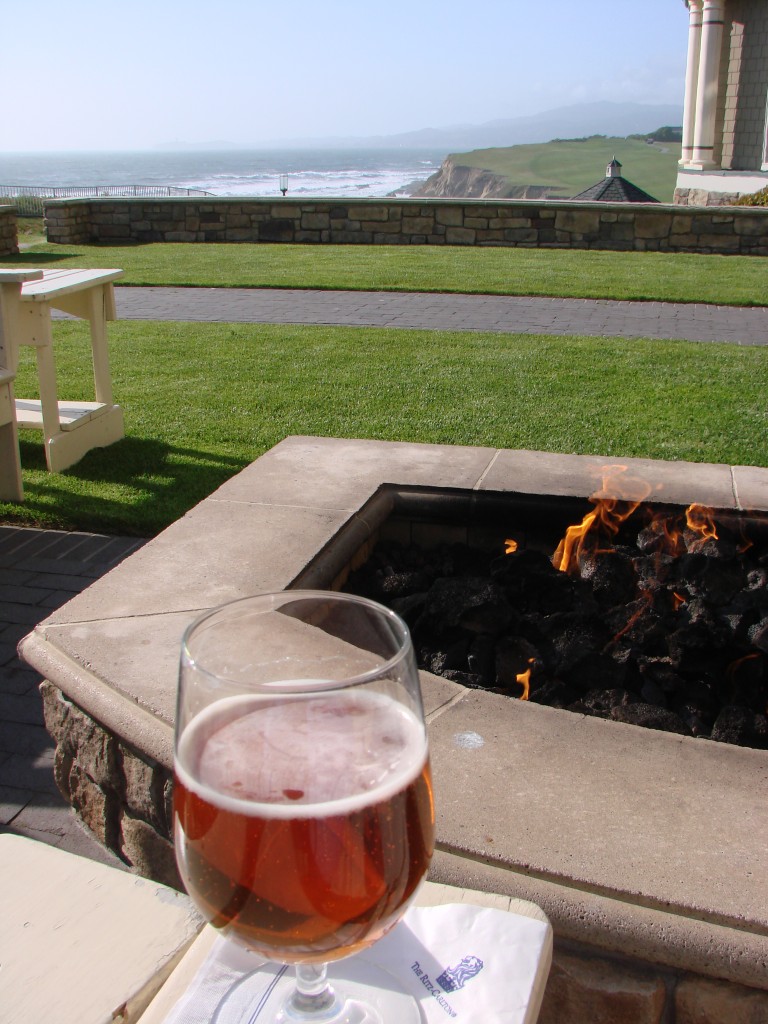 Couldn't quite get all the Half Moon Bay beer, fire pit and golf view in from this angle.

May 28, 2012–An ice bucket of beer in the room was the first pleasant surprise of a visit last week to the Ritz-Carlton Half Moon Bay. The stunning view of the Pacific from our window was probably the second, although we stopped counting since there were plenty more to come.

The strong winds and cool temperatures were perhaps a less serendipitous eye opener. “We’re in California and it’s warmer back home in Vermont,” Lynn said, more in observation than complaint. It did put the Adirondack chairs around the outdoor fire pits at a premium, although the oceanside amphitheater created by the 261-room hotel was an always busy place. I counted three outdoor weddings in progress on Saturday, no surprise given the dramatic cliffside setting.

I was there to check out the two courses at the Half Moon Bay Golf Links while Lynn and other spouses had been invited along to try out the spa and other amenities at the Ritz-Carlton.

Less than a half-hour drive from the San Francisco International Airport, the resort area seems worlds away from any hurly-burly. Visitors (like those dropping by for the U.S. Open at the Olympic Club next month) will find this a worthy detour in just about every way. 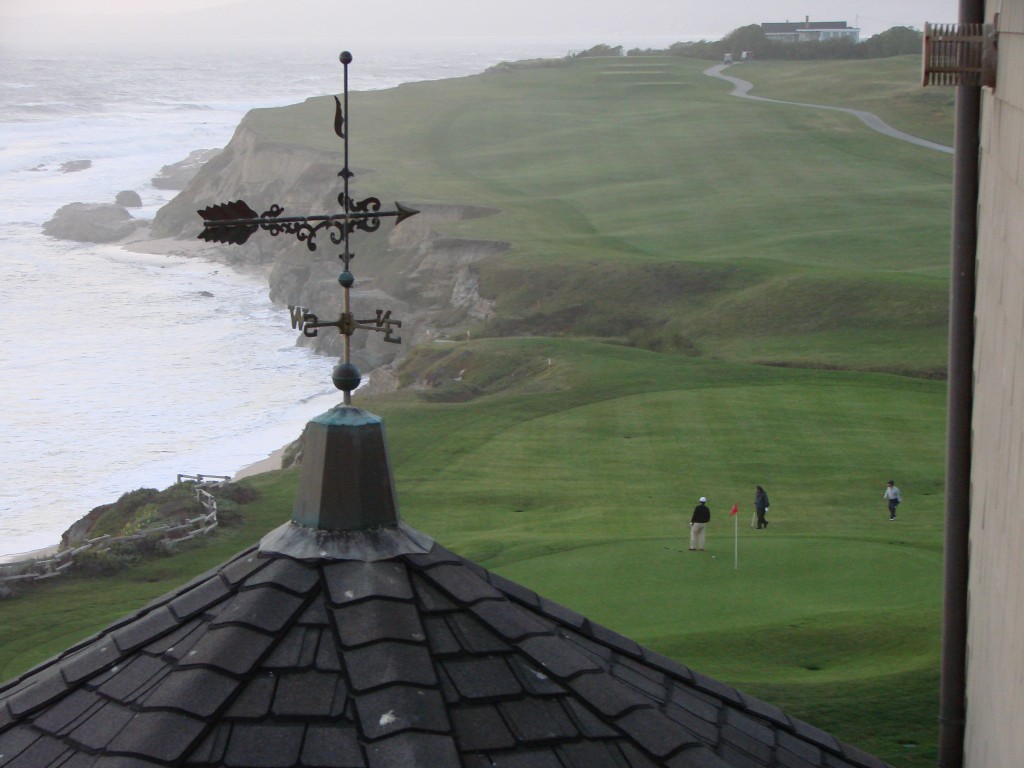 Did a little better with this view from the Ritz-Carlton Presidential Suite, showing the 18th green of The Old Course.

Beginning, at least in my case, with the beer. Nestled in the bucket with old favorites Anchor Steam and Sierra Nevada Pale Ale were two San Francisco beers I’d never had before from Speakeasy Ales & Lagers. Both the Big Daddy I.P.A. (at 6.5% ABV) and the Prohibition Amber Ale (6.1%) are hearty brews, and I’m only singling out the latter because I spirited a bottle home and it’s disappearing from a glass at this very moment.

Both are signature brews of Speakeasy, a micro in the Hunter’s Point area of the city, hoping to increase its production this year to 20,000 from 13,000 barrels in 2011.

That I’d never had a Prohibition Ale is merely an indication of insufficient travel to San Francisco. The sneaky-eye logo of the brewery is apparently ubiquitous on city tap handles, the beers marketed with a general roaring 20’s, gangland theme since its founding–“Legit Since 1997.” Hence beers such as Payback Porter, White Lightning, Scarface Imperial Stout (from the Bootlegger Series) or Old Godfather from the barrel-aged Syndicate Series. 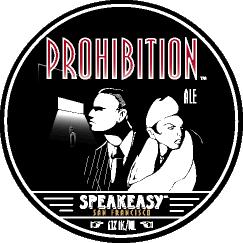 The Prohibition is both strong and hoppy for an amber ale, although after the initial floral and fruity blast from three northwestern hop additions and dry-hopping abates somewhat the caramel malt aromas arise to the fore. It does quite nicely as an in-hand argument against the 21st Amendment (come to think of it, the name of another San Francisco brewer).

While the Prohibition wasn’t on the beer list at all the varied drinking and dining options at the Ritz-Carlton, the staff was always willing to track it down. In my post-visit survey of her opinions Lynn praised the staff at the hotel and spa (where she had a pedicure), as “uniformly excellent.” 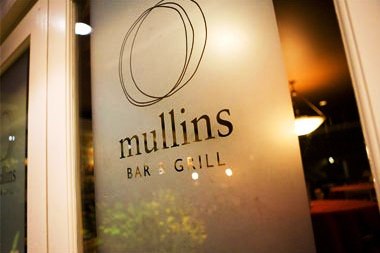 She was also high on our meal at the signature Navio Restaurant, where localvore dining is the rule rather than the exception, and the Muggsy Mary, a bloody Mary concocted by bartender Maureen McCarthy Donohoe at Mullins Bar & Grill.

Mullins is attached to the Half Moon Bay Golf Links pro shop. It’s named after Moon Mullins, the first and long-time pro. Born Clyde Everett Mullins and nicknamed after the cartoon character, Mullins was on the ground with Arnold Palmer and Francis Duane when the two laid out what is now called The Old Course, which opened in 1973.

It was Mullins who shepherded the likes of Joe DiMaggio, Bob Hope, Willie Mays and Jackie Gleason around the course, until he became a local legend himself. 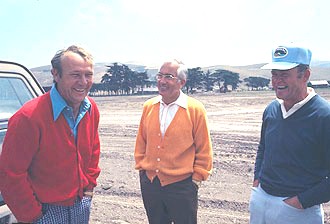 (L to R) Arnold Palmer, developer Jim Deane and Moon Mullins, back in the day

Arthur Hills renovated the course in 1990, and then returned for the opening of his Ocean Course in 1997 (after an 11-year design and build process). The two tracks could hardly be more different, which seems fortunate.

The Old Course is a parkland style track that for most of its holes is bordered by homes, though it busts out big time at the end. The Ocean Course is a wide-open links-style affair throughout with the Pacific rarely out of view, its firm fairways and greens making bump and run the order of the day.

Both courses have ample virtues. Though the Ocean Course is the more highly-touted and the Old Course more protected from the wind (of which there was plenty the two days we played), the latter is a somewhat tougher test. It’s rated at 72.0/130 from the 6,323 tees, versus 71.2/125 for the Ocean Course’s 6,470 markers. (Both courses can be played at close to 7,000 yards for the talented or foolhardy.)

For sheer overall beauty and links-style feel, the Ocean Course wins out, especially with the string of finishing holes playing along the cliffside with the Pacific on the left.

But the closing quartet on the Old Course is strong, and almost nothing in golf can beat its home hole. It starts on elevated tee with the ocean on the right and the Ritz-Carlton looming like a Scottish castle in the distance. It’s a majestic view, and where the cameras always come out before attending to the yardage book details. 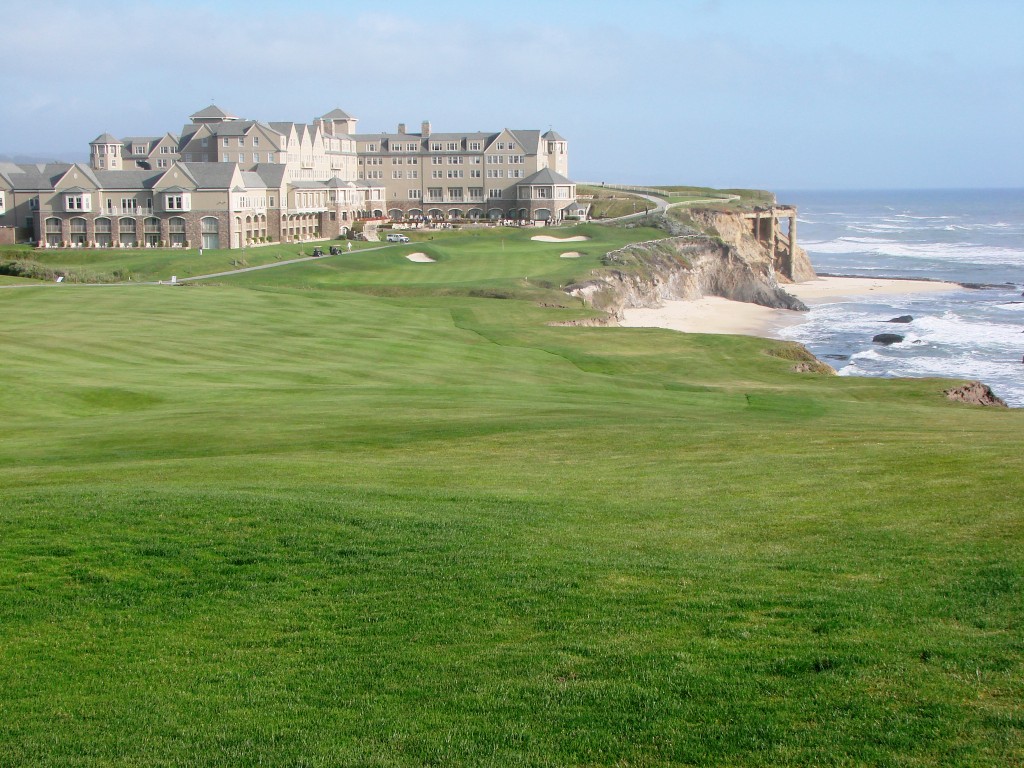 The home hole of the Old Course at Half Moon Bay

Even from the tips the hole is but 405 yards, playing down to a ravine which makes driver a dicey choice. The second shot heads back up to the green in full view of the crowd gathered in that patio amphitheater. True, not everyone in the gallery will be paying attention to your approach; it only feels that way, and adds to the inherent excitement of the finish.

Wrapping up a round definitely calls for a Prohibition, whether at the hotel or in Half Moon Bay itself. The Ritz-Carlton runs regular shuttles into town, about ten minutes away. There’s an appealing California funky small town (about 11,300 population) tourist vibe going on good for an afternoon stroll.

As had been suggested to us, we had dinner at It’s Italia right on Main Street, and it was a good suggestion. A little noisy at the peak hour, but tasty, reasonably priced and with one rotating tap handle to supplement the decent beer list. 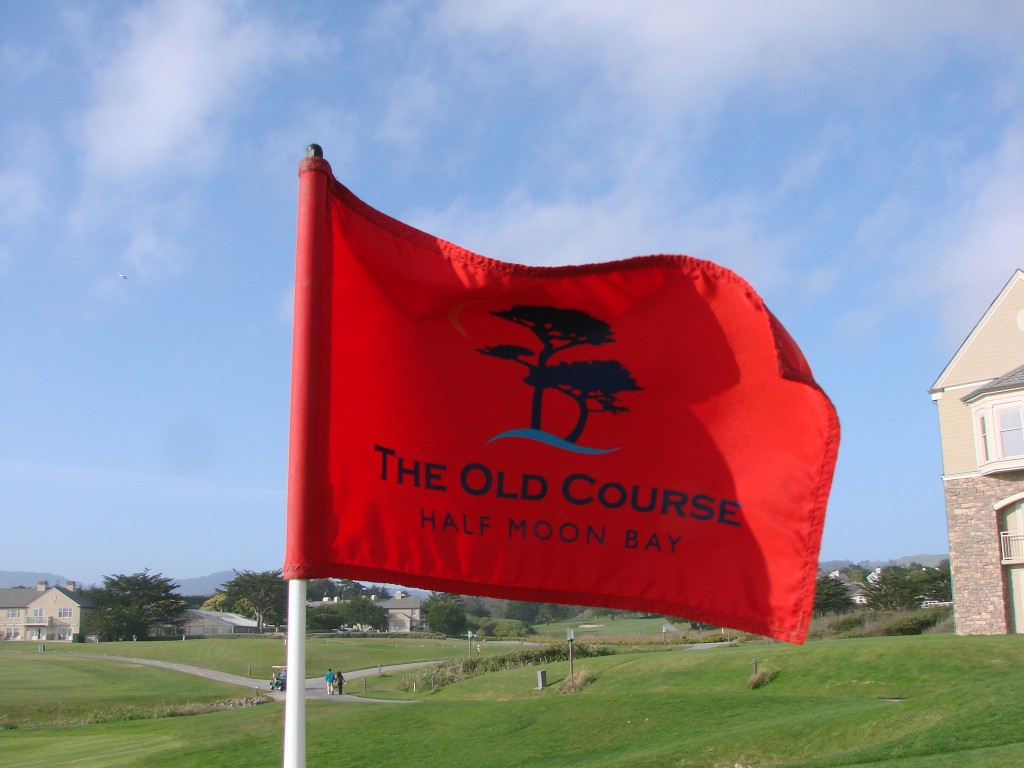 Then it was back to the fire pit at the Ritz-Carlton for a nightcap and a cigar, pleased both in my surroundings, and that The Great Experiment had been a dismal failure.