[<<Previous post on the Festival: By the Great Wall of China] 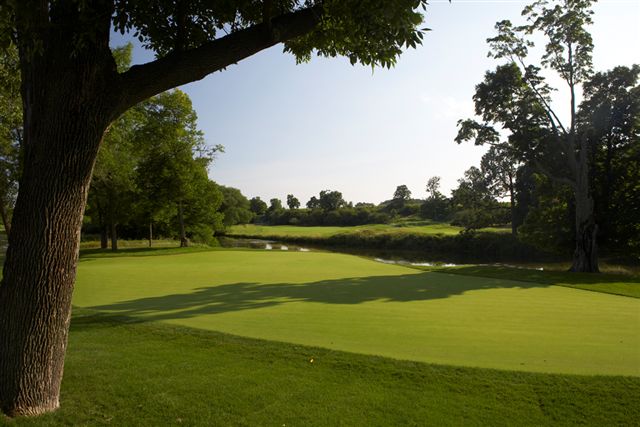 The home hole at Meadow Valleys

They’re having a golf tournament at the resort’s Blackwolf Run in July, a little something called the U.S. Women’s Open (last staged here, spectacularly, in 1998). The men’s PGA Championship has been played at Whistling Straits in 2004 and 2010, and will be again in 2015. In 2020, it will be the Ryder Cup. In the world of golf, it doesn’t get much bigger than this.

And though I didn’t play golf yesterday, others did; as far as the beer festival goes the tournament that really counts is the Blackwolf Run Beer Challenge and Million Dollar Shootout.

No scientific analysis has been done on whether (or how much) intake of swing oil helped or hindered the cause, but there were also specialty beer offerings available on all the par-3 holes. 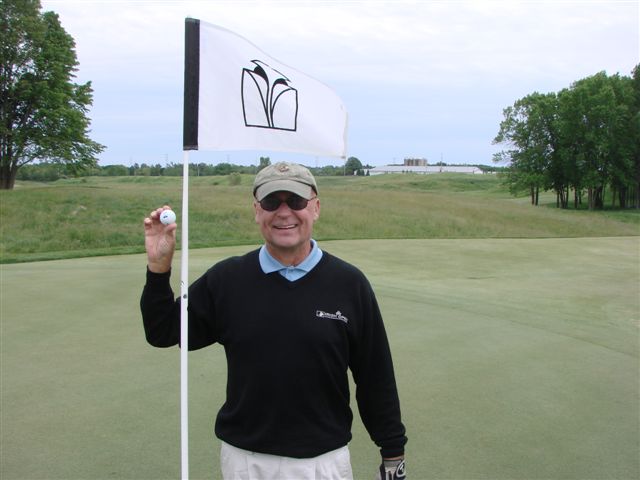 Leurquin also had a shot at the $1 million prize, along with John Bratz, Bruce Orr, Rick Rasmussen, Joey Singson and Matt Ward. None walked away the richer, except for the experience.

That was particularly so the first day when we all arrived and quickly hastened out to the Meadow Valleys course at Blackwolf Run. Wasting little time, Tom Harack stepped up at the par-3 third hole and promptly drilled one into the cup, his second ace, if about thirty years apart.

That puts him two ahead of me, but at least he had the decency to buy Herb and me a round the next time the beverage cart rolled around–filled with craft beer, naturally, so I went for my first of many different beers sampled over the weekend, a Spotted Cow from New Glarus Brewing.

Those many different beers have made this into a great beer festival for me, but they’ve definitely not helped my golf. Still, it’s a joy to play here, one of the great golf resorts in the country.

With four superb Pete Dye courses, the sumptuous pleasures of The American Club, a top notch spa and dining options all over the place, it would be tough to beat Destination Kohler on an off day. And usually it’s at the top of its game.

Blackwolf Run is the closer facility to The American Club, only about five minutes away. Its two courses, Meadow Valleys and the River, have been recently renovated, the latter considered the tougher, with more tree-lined and narrow corridors. From the middle tees the River measures 6,507 to a slope of 139, while the Meadow Valleys track comes in at 6,450/136. 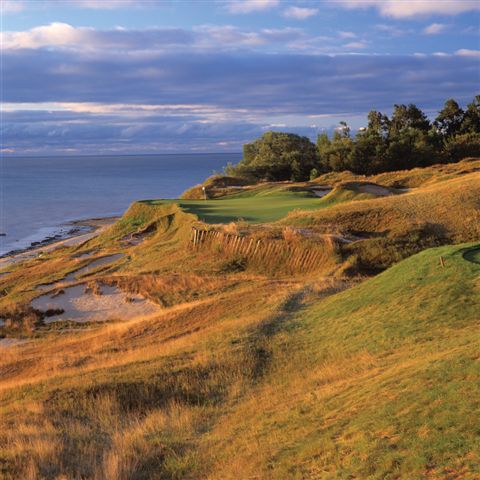 Seventeenth hole at the Straits Course

Obviously, neither is a pushover. The women will play a composite known as the Original Championship Course, consisting of holes 10-18 of the Meadow Valleys course and then 1-4, 14-18 of the River. In 1998 the winning score was +6, a memorable tie between Se Ri Pak and amateur Jenny Chuasiriporn that went to 20 holes of a playoff until Pak finally prevailed.

Over at the Whistling Straits complex the Straits is the acknowledged masterpiece, a links-style beauty and beast hard by Lake Michigan, with something in the vicinity of 987 bunkers (no one seems to know exactly how many). Dustin Johnson had some particular difficulty in one on the 72nd hole of the PGA Championship in 2010, and naturally your caddie should be able to point the offending bunker out.

Caddies are highly recommended at the Straits course, since it’s walking only and the walk alone is wearing, never mind trying to deal with all the ceaseless strategy Dye throws at you. The mid-range tees here stretch to 6,663 and a slope of 143.

The Irish course at Whistling Straits is no weak sister, though it seems less intimidating and plays moderately easier. But it’s still a hearty 6,366 yards to a slope of 142!

In short, there’s a lot of golf here, always a visual treat and a mental and physical challenge. There’s comfort in knowing that a well-deserved Jigger Ale is awaiting at the clubhouse bar. The variable factor–how you’re playing–triggers how early in the round you start thinking about it.

[>>Next post on the Kohler Festival of Beer: Kohler P’s and Q’s] 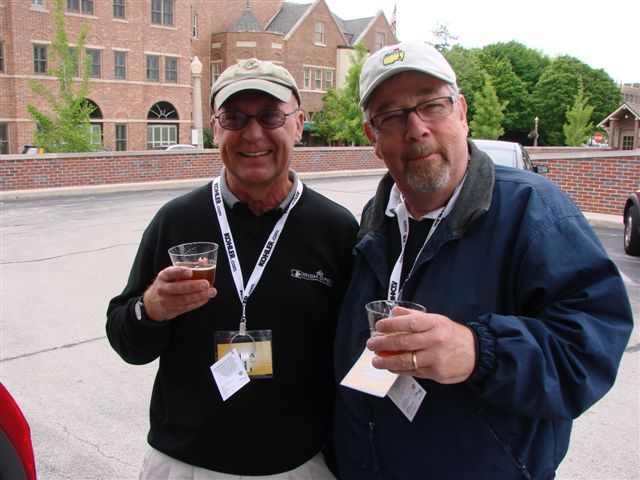 TAP Festival of Beer at Kohler: The A Position writers Tom Harack (left) and Herb Gould sampling some of Herb’s homebrew in The American Club parking lot