1) Replica holes for those who have never played in Scotland or England.

2) Replica holes for those who have played the classic courses in the Open Championship rota.

3) The chance to watch a foursome member wreak havoc on the course. 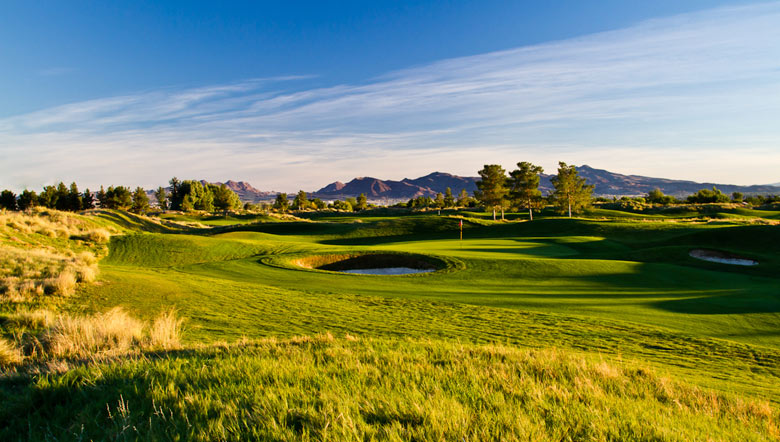 Royal Links 15, based on Turnberry's fifth.

1) Replica holes for those who have never played in Scotland or England.

Las Vegas is expert in creating parallel universes that sort of look like real life but skirt alternative realities just enough to make sure you know you’re on vacation. Witness the New York-New York skyline, the Eiffel Tower at Paris Las Vegas, the gigantic pyramid that is The Luxor hotel and casino.

A little more than eight miles from The Strip is just such an alternate reality for golfers, the Royal Links Golf Club. The “Royal” refers to those English and Scottish courses that have served as venues for the Open Championship. Players who have never had a taste of links golf can get a feel for it here.

There’s the firm and fast rolling terrain, sometimes feeding into previously invisible pot bunkers; the bunkers themselves, sometimes so deep that stairs lead down to the bottom; the large and memorably contoured greens, and–if lucky the way the Golf Road Warriors were–a brisk wind to play in, adding to the strategic mix. (Though granted, far more comfortable temperatures are the norm.)

2) Replica holes for those who have played the classic courses in the Open Championship rota. 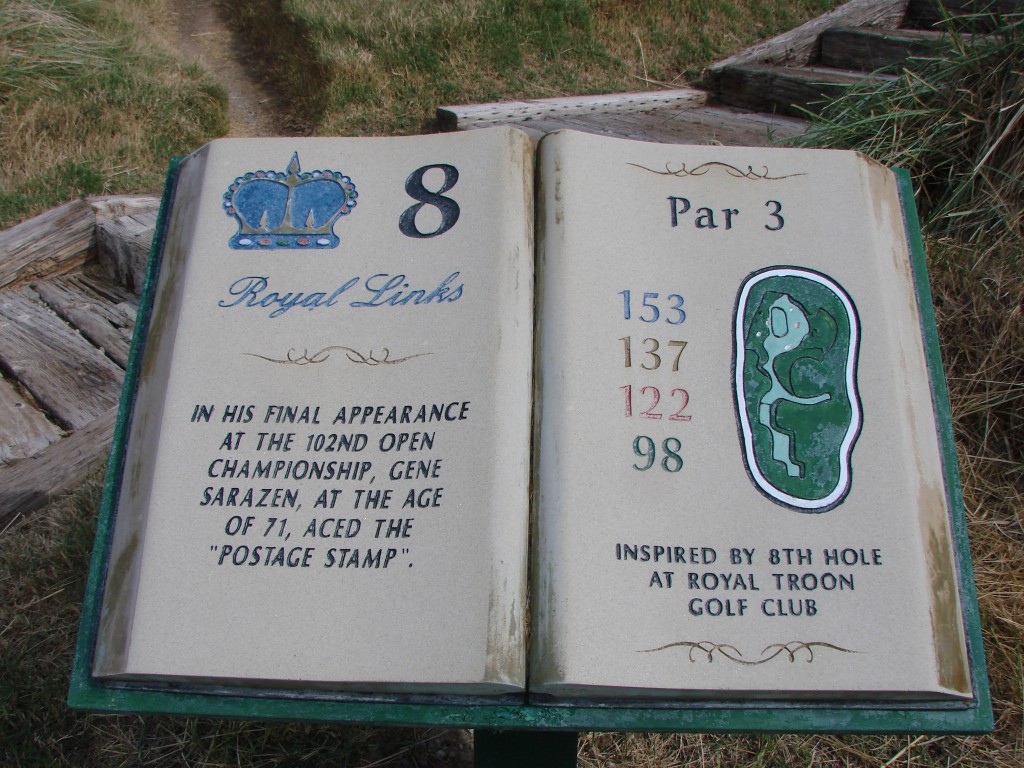 Of our “fivesome”—four players and videographer Jamie McWilliams—only Jeff Wallach and I have played any of the original holes—11 in Jeff’s case, ten in mine. Jamie will soon have a video up on the Golf Road Warriors Vegas site where Jeff and I discuss our impressions of the course, but it’s safe to say we both enjoyed trying to match up our memories of the original holes with those on the ground here.

I’d be lying if I said I was immediately struck by the authenticity of the replicas—and that’s because my memory of the originals is faulty. I may have played them, but clearly not enough. And truth be told, while Pete and Perry Dye measured out the originals to the inch, it’s impossible to recreate the context for every hole.

The overall sense memory of the links golf holes is strong, however, and I certainly recognized the eighth hole, which mirrored the eighth hole at Royal Troon, the very first course I ever played in Scotland. Also known as the Postage Stamp hole, Troon’s eighth is one of the most famous par-3 holes in the world.

Alas, I botched the hole when I first played it at Troon. But here? Damned if I didn’t botch it again! So as far as I can testify, the holes are exactly the same.

3) The chance to watch a foursome member wreak havoc on the course. 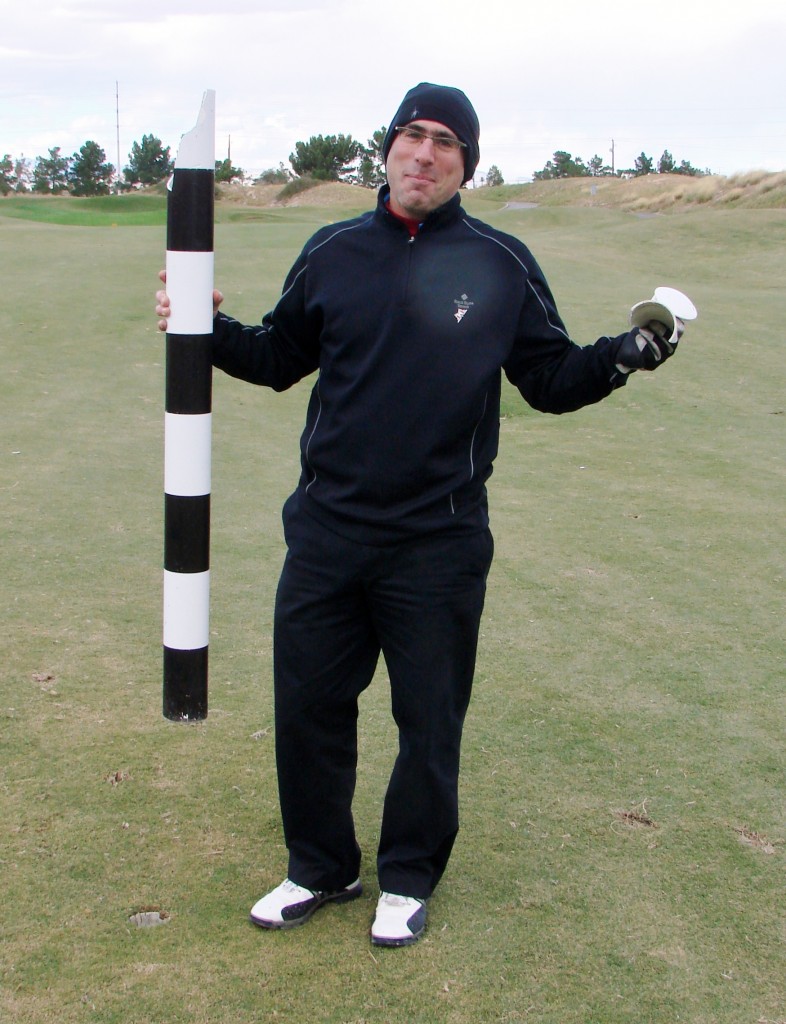 Okay, this isn’t really a legitimate reason to want to play Royal Links, but it certainly was attention-getting today when our noble leader Wallach, who has been playing some splendid golf lately, ripped a mighty three wood in the fifteenth fairway. It might have been a good shot, except that it rocketed into the yardage marker a few feet ahead of him and sheared off the top, while the ball shot off on some unrecoverable angle we never could determine, probably because we were laughing so hard.

Anyway, we’ll go with thematic consistency as an actual reason. Royal Links is jammed with memorabilia that add to the overall feel of a links experience, inside a clubhouse resembling a small castle. There’s a giant replica of the Claret Jug out front, a statue of Old Tom Morris and even a stand-in for the Swilcan Bridge at St. Andrews, where we all struck Jack Nicklaus-like poses.

What look like giant storybooks adorn each tee, with information about the replica hole’s importance in Open Championship history. (These books are made of stone, though that didn’t stop two of our number from trying to turn the pages.)

Both the scorecard and a yardage book add to the information about each hole, and are as much fun to read after the round as during. And maybe safer, if one is dodging flying yardage marker debris during play.

Royal Links is the first of three courses we’re going to play in the Walters Golf repertoire, with Bali Hai up tomorrow and Desert Pines on Monday. But at any of the three courses, the ParMates are ready and willing to serve you. 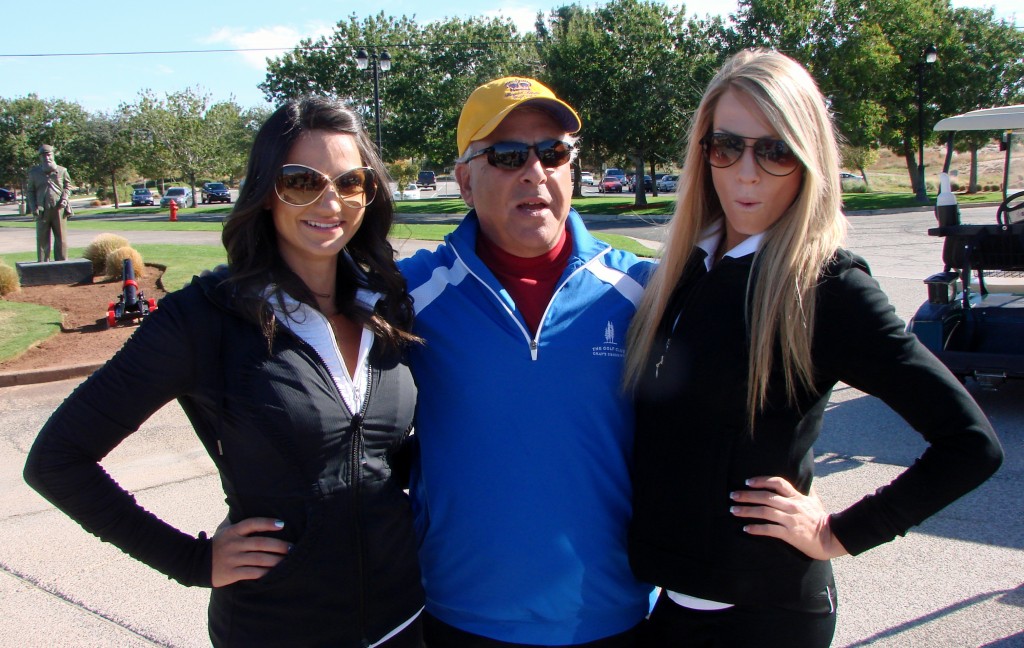 Well, willing for $225 per ParMate, that is. For the expenditure players will be supplied with a forecaddie who will perform all the typical forecaddie duties, except this particular forecaddie will be a beautiful girl, fetchingly dressed, who will also bring an outgoing personality to bear on making one’s golf round something out of the ordinary.

I don’t know if we had the all-stars of the ParMates team for our round, but I would have to think Katie Keeney and Crystal Ann Marshall are piling up substantial votes. The pair added a spark to the day that made the round more about having fun than about any serious attempts to conquer the course, and have fun we did.

Hard to say what Old Tom Morris would think about this. But his statue appears to display a bit of a twinkle, as though the golfing sage were putting a hesitant at ease and reminding him of the prevailing, essential fact–This is Vegas, baby! 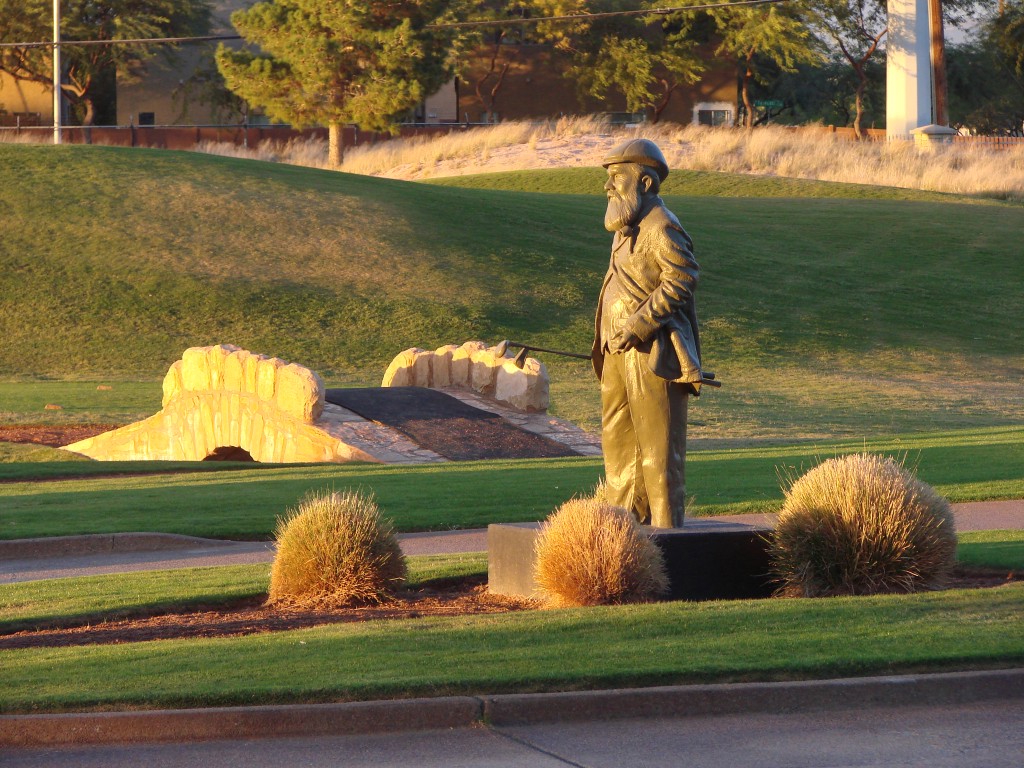 Old Tom and the Swilcan Bridge