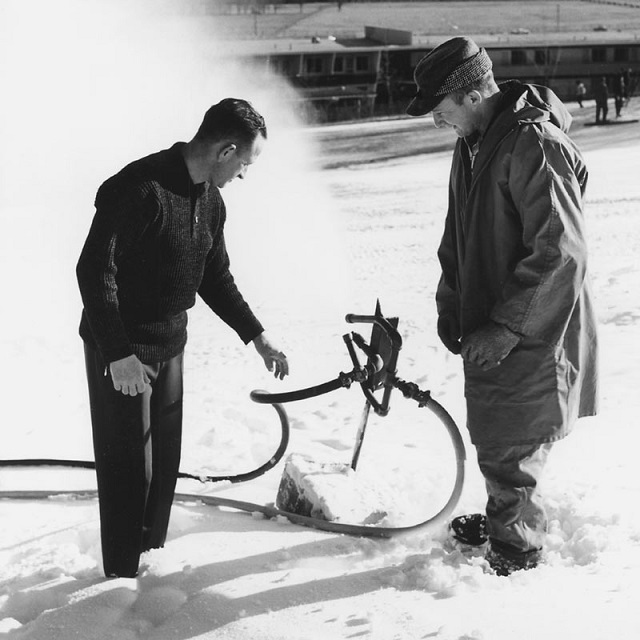 It might be right up there with the sale of Manhattan for $24. In 1947 Everett Kircher ran a Studebaker showroom in Detroit, when he wasn’t running off to Sun Valley, Idaho, to satisfy his passion for skiing. In those days, that wasn’t a short trip.

Kircher figured there must be easier way, and he and two partners started scouting the Michigan hills for a plausible site to build a ski resort. When they finally settled on 40 acres in the northern highlands of Michigan’s lower peninsula the owner, a state Senator named William Pearson, was so bemused by the notion he sold the trio the land for $1.

Kircher died in 2002 at 85. His company, Boyne Resorts, now run by his son, Stephen, took in about $400 million in revenues last year* and employs some 10,500 in its 11 resort properties, which includes nine ski areas and 13 golf courses in the U.S. and Canada. They now own a lot more than 40 acres.

Headquarters is still in Michigan, where there are three Boyne resorts, and it’s the mother lode for the company’s golf holdings. Pretty good for an afterthought that the late Kircher came up with over a beer with a friend, Bill Harber, in the mid-50’s.

Kircher was bemoaning how difficult it was to keep staff around after the ski season ended and the Boyne Mountain resort turned into a ghost town. Harber suggested adding a golf course. The pair promptly, after another beer, went out and staked out a nine-hole executive course using bamboo slalom poles.

When it came time to get serious with a full-length course for the Boyne Highlands resort it was Harber, again, who suggested Kircher hire the best-known course designer of the day, Robert Trent Jones Sr. 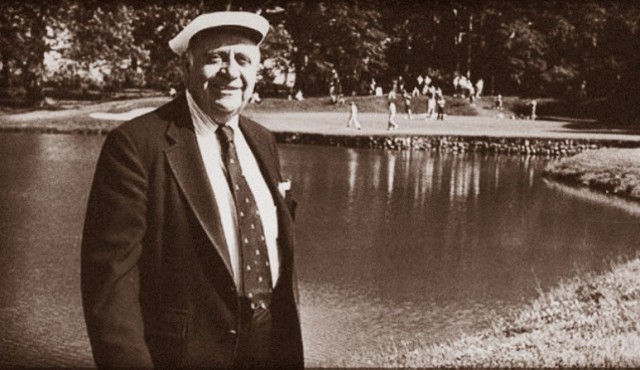 Robert Trent Jones Sr. in front of what would appear to be the Heather eighteenth hole.

So it came to be. The Heather course opened in 1966 and is often credited as one of the catalysts for the northern Michigan golf boom. It certainly energized the Boyne company—and kept the staff on hand year-round.

One tag line for the company is “Ten Courses. Three Resorts. One Destination.” To wit: The Alpine and The Monument courses at Boyne Mountain in Boyne Falls; The Heather, the Arthur Hills, the Donald Ross Memorial and The Moor courses at Boyne Highlands in Harbor Springs; Crooked Tree Golf Club, and the Links, Preserve and Quarry courses at the Inn at Bay Harbor, all within 45 minutes of one another.

The counting is a little creative with the latter, as the trio at Bay Harbor are three distinct nine-hole routings. They are arguably the jewel in the crown, though the company’s very first course, The Heather, has lost none of its luster over the years. In 2018 it was named the Michigan Golf Course of the Year and this year copped the National Golf Course Owner’s Association Course of the Year award, as well as making the Golf Digest’s list of America’s 100 Greatest Public Courses. 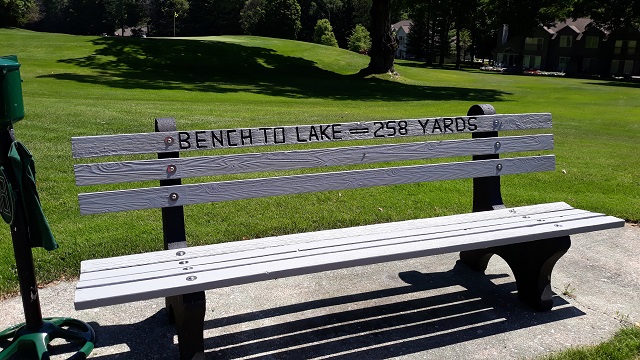 In late June I visited the Boyne Michigan resorts in cahoots with a cadre of other golf writers. If there was little extra time to try, say, the zip line at Boyne Highlands, or the plethora of other outdoor activities at the various resorts, we did manage to play sixty percent of the Boyne courses, gorged at a multitude of the resorts’ dining options and dipped into some of the community charms of nearby Petoskey, about ten minutes from the Inn at Bay Harbor.

Along with Jones, the courses were designed by Arthur Hills and William Newcomb, as well as the ghost of Donald Ross. Bernie Friedrich, the first golf pro at Boyne and, 44 years later, the senor vice-president of golf operations and resort sales, said, “Everett Kircher had a vision that we’d have a Donald Ross course made of replica holes from his courses that people wouldn’t normally have an opportunity to play.”

Friedrich, Jim Flick (then the chief instructor at the resorts) and well-known Michigan golf designer Newcomb hit the road in the U.S. and abroad in search of Ross holes that might reasonably adapt to the Boyne terrain. “That course was more than four years in development,” said Friedrich, just inducted this year into the Michigan Golf Hall of Fame (joining Kircher). “We must have looked at 600 or 700 holes over the years.” 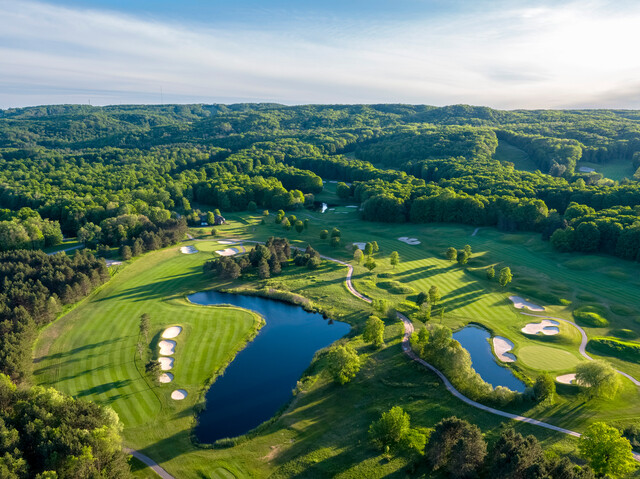 Holes 13 (left) and 8 at the Donald Ross Memorial course

Newcomb eventually put it all together, and the Donald Ross Memorial course will give players a taste of holes from Seminole, Oakland Hills, Royal Dornoch, Pinehurst No. 2, and other Ross greatest hits. Having played five of the actual holes represented, I can’t say they rang any of my memory bells, but the course is an enjoyable and organic amalgam in any case.

Newcomb, who worked for a time with Pete Dye and coached the University of Michigan golf team for a decade, also designed The Moor, Monument and Alpine courses for Boyne.

Hills is well-represented by his namesake course at Boyne Highlands, a re-do of the Crooked Tree course (originally a Harry Bowers design) and the three nines at Bay Harbor. 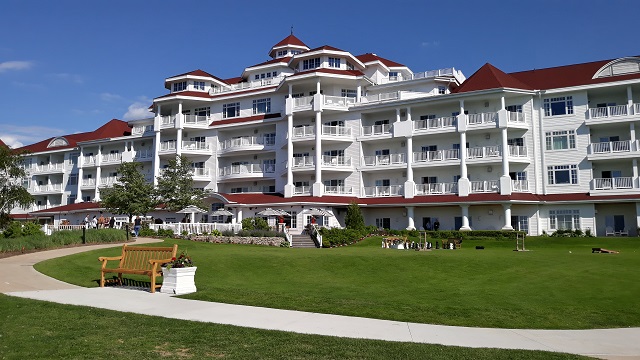 The Inn at Bay Harbor is simply a beautiful sight to behold on the wide shore of Lake Michigan’s Little Traverse Bay, the gleaming Victorian style cottages and the main inn putting a modern spin on grand summer resorts from bygone eras.

Hills did put a unique stamp on the aptly named nines of the Bay Harbor courses. The Links indeed hugs the shoreline on many holes, running out and back along bluffs overlooking Lake Michigan. The Quarry plays around the rocky formations of a former shale mine. And the Preserve is the most naturally wooded of the trio.

Players can go around in three ways: Quarry/Preserve, Preserve/Links or Links/Quarry, the latter the most requested. They’re the more dramatic nines, to be sure, beautiful but testing—from the 6,427-yard tee markers the slope rating is a daunting 143. 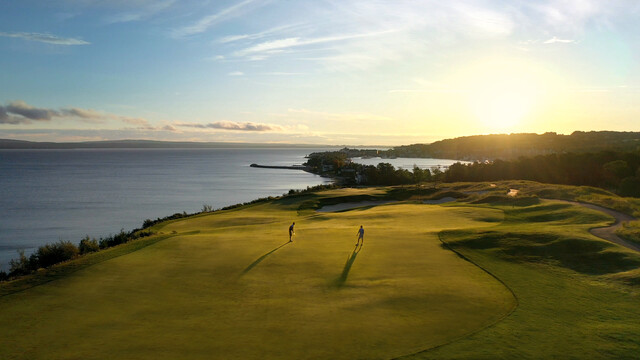 Jerry Roman, who used to work at Bay Harbor but was recently installed as the head pro at the Boyne-run Sunday River course in Maine, said the Preserve was actually the pros’ favorite. Although he admitted that was partially because that was the course they could sneak out to take their cuts on when business slackened late in the day.

Look at the Boyne website and you can find a hefty list of pros and instructors at the various courses, all of them asked which was their favorite Boyne course. Other than Friedrich, who diplomatically answers, “All,” the vast majority of them choose The Heather. (The Alpine a clear but distant runner-up.)

I might lean to Bay Harbor, but why quibble when you get to play them both? But clearly the Jones course has stood the test of time well for a more than 50-year-old course. It’s had some length added over the years, but the original design stands as it was.

Well, except perhaps for the eighteenth hole. When Jones finished the routing Kircher wanted something more dramatic for the par-4 finish. Like, say, a second shot that, after about a 250-yard drive requires an 180- to 200-yard carry across a 140-yard pond to reach the green. 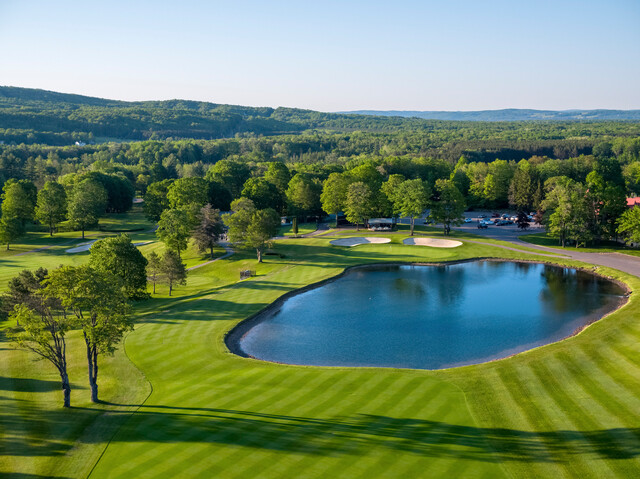 “Everett was a bit of an engineer,” said Friedrich. ‘You can always tell an engineer. But not much.” 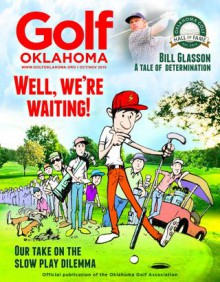 There was no question as to who was going to win that design tussle. The pond is there today in all its forbidding glory. There is a safer layup route to the left of the pond. But you didn’t come to northern Michigan to lay up, did you?

*This piece first appeared, in somewhat different form, in the Oct.-Nov. 2019 issue of Golf Oklahoma.