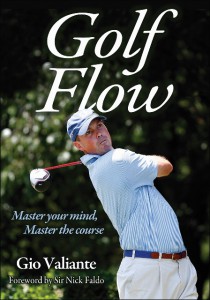 I’m writing this piece with a broken finger, no way to start a golf season. But at least I have last season to remember, and my best round ever. As a perennial mid-handicapper, getting longer in the tooth, I was beginning to wonder whether I’d ever be able to accomplish what I never had before—breaking 80.

The closest I’d ever come was a couple of 82’s; the 80 barrier was beginning to look insurmountable, particularly after I cobbled together a handful of rounds shooting 39 going out, only to stumble coming in. (The nadir of these rounds was a 39-59!)

But then one early September day I just went out and did it—a 39-39, and after reading Gio Valiante’s Golf Flow (Human Kinetics, $19.95) there’s no question that during that round I had achieved the mental state he describes and recommends.

It’s no easy concept to summarize, and many readers may have difficulty making their way through a book that throws around terms like myelination, kaizen, automaticity, mastery versus ego orientation. Not to mention seeming paradoxes in the state called Flow—time that speeds by in slow motion, intense focus that is effortless, heightened awareness that feels detached and so on. But it’s an effort worth making.

Any player or sports spectator will recognize manifestations of Flow—talk of being in the zone, in rhythm, stress-free, focused on the endeavor at hand and yet just feeling it unfold without any sense of urgency or concern about the actual score.

Indeed, though I was certainly aware I was playing well, I didn’t really know my score until we added up the card at the end of the round. The only time I stared to think about numbers was after my drive on the last hole–and that was the only time all day tension started to overtake me. But I was able to tamp it down, walked off with another par, and straight into a grateful amazement. 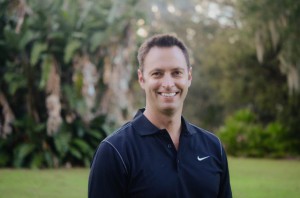 What was different about this round from the other chances that I had blown? It was mostly in my head, which is the whole point of Golf Flow, that one’s mental state will affect your game more than your mechanics.

One thing was that I had blown those earlier rounds. Valiante considers blown opportunities just that—opportunities to learn something. I knew there was every chance I might screw up again—have a bad hole, suffer a bad bounce, lose concentration. The difference was that I simply accepted the fact—and therefore didn’t really care about it. I think I even remember thinking: What will be, will be. And that acceptance freed me from tension about what would happen, allowing me to keep swinging free and easy.

Valiante spends about a third of the book describing the Flow experience, and then uses examples from Tour players he has worked with like Matt Kuchar, Justin Rose, Stuart Appleby, Sean O’Hair, Bryce Molder. Lastly, he has ten keys to try and achieve Flow in one’s game.

Valiante emphasizes the mind over physical technique, but naturally the tools of the game are woven into the fabric. Still, in a book that asks readers to ask themselves, “Why do you play golf?”, suggests practicing gratitude, counsels accepting negative outcomes and turning them into positive lessons, one shouldn’t look for a lot of swing tips. 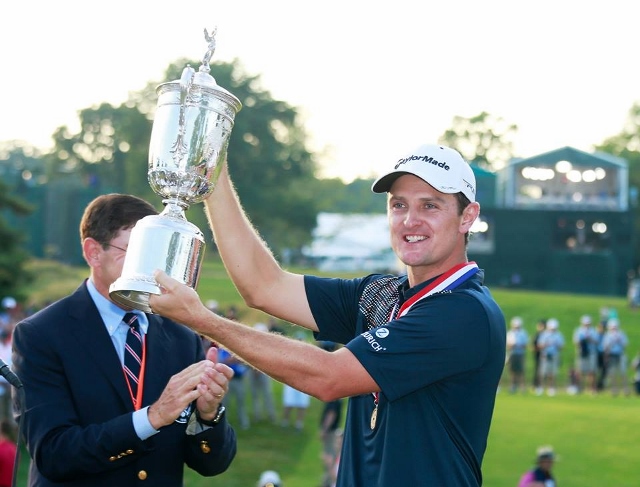 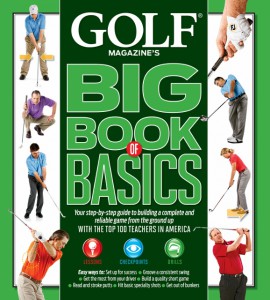 For that there are two new Golf Magazine instructional offerings, The Par Plan and Big Book of Basics (both Time Home Entertainment, $29.95 and $32.95 respectively).

There are general similarities to the two hardcover volumes. Both are edited by the magazine’s managing editor for instruction, David DeNunzio, both are magazine-sized and magazine-like in the use of extensive graphics, photos, sidebars. (Gauging by the look of those balls buried in bunkers, maybe the same photos in some cases.) And naturally both have the same goal—game improvement.

But they go at it in different ways. Basics is just that, a seven-part primer by instructors drawn from the magazine’s Top 100 Teachers list. And when it comes to fundamentals, they’re not kidding around—there are twelve pages here on the grip alone.

I especially liked the section by Kellie Stenzel in which she goes over 11 specific shots (the knockdown, bump-and-run, purposeful fade…), complete with little “difficulty level” gauges.

This is the book for beginners, those who games have become stuck in poor routines, and those who could just use some refreshers. The book is attractive, sensibly-organized, stuffed with drills (but blessedly free of some of the wackier drills that sometimes find their way into periodicals). And it can be dipped into randomly, at one’s own pace. 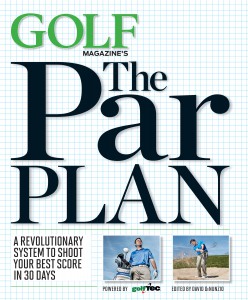 So can The Par Plan of course, but that’s not the intent. The goal here is to shoot one’s best score in 30 days, and the book is broken down into nine sections of one- to five-day plans covering driving through bunker play. The suggestion is that one should clear the calendar to go through the plan, eschewing play in the meantime. (This may the perfect gift for the spouse you’d rather not see for a month.)

Short of an actual guarantee, the book claims those who dedicate themselves to the plan will emerge to shoot their best score ever, and it points to the 95% success rate of GolfTEC, which now has some 170 game improvement centers worldwide.

The book was created in concert with GolfTEC and uses the technical know-how of the company to extend the lesson platform to online videos of the drills discussed. There’s also a free swing capture app for smartphones or tablets, allowing users to assess their technique.

Luddites like me, with neither smartphone nor tablet, can presumably do it the one-dimensional old-fashioned way. Not a hardship–like Basics, this book is packed with fascinating graphics, like the number of greens you need to hit per round to reach a goal score. (Eight and a half is the average for a score of 78; sure enough, I hit 10 GIR in my sub-80 round.)

One way to take time off from one’s own game is to revel in how the pros deal with the mental and physical challenges, and there’s no greater test than the U.S. Open. The USGA has put out a handsome volume, written largely by Robert Williams and Michael Trostel, Great Moments of the U.S. Open (Firefly Books, $35). 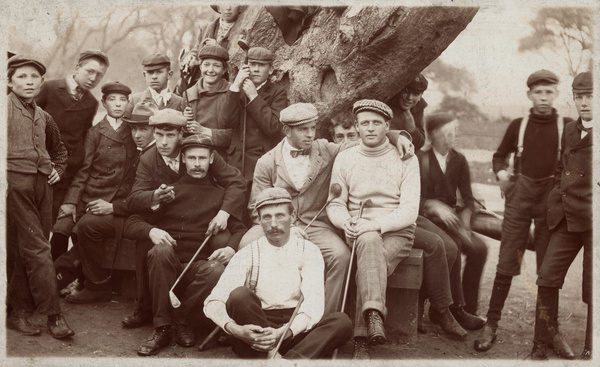 But there are other contributors, including a forward by four-time U.S. Open champion Jack Nicklaus, in what is less an exhaustive chronology than a series of essays around five central themes—“Defining Moments,” “Perseverance,” “Underdogs,” “Comebacks” and “Dominance.”

Rhonda Glenn contributes an apt piece on “America’s First Golf Hero” in this 100th anniversary year of amateur Francis Ouimet’s improbable victory over Vardon and Ray at The Country Club in Brookline, Massachusetts. But there’s plenty on the heroes that followed as well, from Hogan and Palmer to Woods and McIlroy.

It’s all a pleasure to read, and the archival photographs seal the deal. For anyone interested in the history of the game in the U.S., this one needs to be in the library.

This piece first appeared, in slightly different form, in the June-July 2013 issue of Golf Oklahoma.