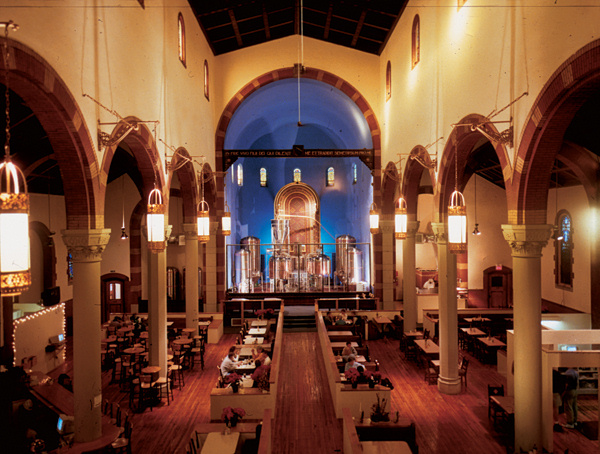 The Steelers may have lost Super Bowl XLV, but Pittsburgh wins my favor in the beer contest, for the simple reason that I was able to get some decent beer from the Steel City.

To give Green Bay its due, the Hinterland Brewery was probably a little busy to worry about a peon like me–it had just received an order for three cases of beer to be served at the White House Super Bowl party–one each of its Pale Ale, Amber Ale and Luna Stout.

And a Pittsburgh beer? None on order, though owner Scott Smith of the East End Brewing Company mounted a spirited social media campaign to try and get some of his beers onto the White House playing field.

In the end, Pennsylvania was represented by Yuengling Lager and Light from–Pottsville. To use an oft-uttered Washingtonian phrase: no comment. 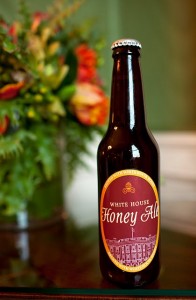 Truth be told, the bottle I would have been have knocking people over to get my hands on was the White House Honey Ale, homebrewed at 1600 Pennsylvania Avenue by a team of the staff chefs, using honey from the White House bee hive.

Talk about a collectible! But rumor has it that of about 100 bottles on hand at the party, not a one was left by evening’s end. Must have been a raucous evening.

The President is turning out to be one of our greatest Chief Executive hopheads, a matter that may bear a further post. Yes, history notes that the founding fathers enjoyed their homebrew. (Actually, I also noted it, here.) 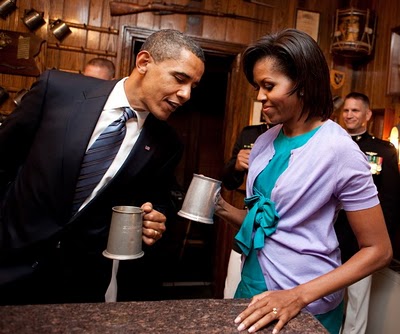 But the Obamas are the first to have presided over homebrewing in the White House. However, as the lively White House food site Obama Foodorama notes, it was widely misreported that the President did the brewing himself, which he did not. Give him time.

I’m no big football fan. Actually, I actively dislike the sport and wish the Super Bowl would dry up and blow away. I just can’t take the hype. But if it gives me an excuse to try a new beer, then bring on #XLVI! 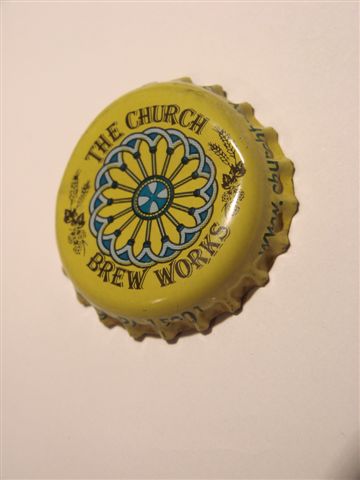 It’s not likely I would have run into the goods from the Church Brew Works on my own, as the beer is distributed only in western Pennsylvania, radiating out of the Pittsburgh brewery and restaurant in the Lawrenceville area.

Radiate is the word. Housed in the former Diocese of Pittsburgh church, St. John’s The Baptist, the Church Brew Works may be one of the loveliest breweries this side of Rochefort. Built in 1902 as a church, school and convent, St. John’s ministered to the local community until 1993, when the Diocese deconsecrated it.

Sean Casey, president of the company, purchased the building directly from the Diocese in 1996, and the reconstruction project was soon underway. From the start, the goal was to keep the sanctuary space intact, use the original pews for seating, maintain the stained glass windows, and install the brewhouse on the former alter.

The Church Brew Works opened in August of 1996, and it has been wowing people ever since. A lively menu and good beer help, of course, but the ambiance is clearly unique, achieving a Historic Landmark status from the Pittsburgh History and Landmarks Foundation in 2001. The effect looks pretty breath-taking in photos. Next time I make it to Pittsburgh, there’s at least one must-do on the list.

There’s a nice range of regular beers and specialties at the Church, a few bottled for wider distribution, but perhaps in a nod to Lawrenceville’s historically heavy German population, its best-seller is its Pious Monk Dunkel, a Munich-style dark lager–not the most common style at U.S. breweries. I would have liked a touch more malt sweetness in this one, which rolls in at about 4.3% ABV, putting it on the light side for the style. But a fine and drinkable brew nonetheless. 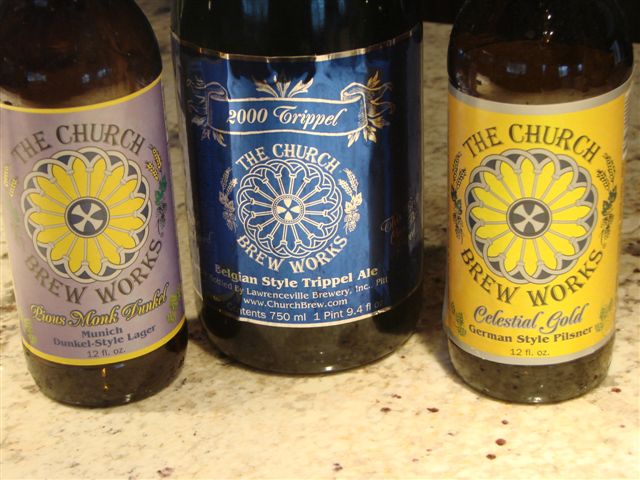 I leaned more toward the Celestial Gold, a north German-style pilsner (at 4.1% ABV) that I thought had an appealingly grainy aroma and flavor, delivered cleanly and crisply, with a spicy hoppy bite.

The Millennium Trippel is also called the 2000 Trippel, and was first brewed then, though there are only four bottles left from that vintage. It’s conditioned in a 750-ml bottle, which the brewery suggests can be safely aged, although it’s the first beer label I’ve seen that recommends long-term storage of the bottle on its side.

The beer is hazy orange, with a short-lived head and little Belgian lace. At first there was a somewhat tinny aroma, a sense of slight oxidation, but that blew off and the Belgian yeastiness came forward with a wave of fruity esters–peach and pear.

The quite-pleasant flavor had a touch of green apples, a distant funk, and a dangerously absent sense of alcoholic power. The peppery finish is a strong hint, however, and should help keep matters on a reverent level.